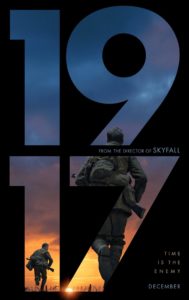 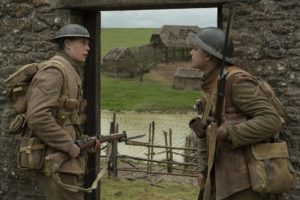 Instantly one of the best movies of the year, and the best war movie since Saving Private Ryan, this one is a modern masterpiece.

A movie that uses remarkable camera trickery and technology to put us right there in the trenches with the characters for the entire film. This is a World War I movie about a quest to get from one place to another and deliver a message. In order to do that, our two protagonists have to travel through lots of dangerous territory. And the movie is made to look like the entire thing is done in one, single shot. That means tracking and steadicam are used to follow these characters throughout the entire movie. It’s pretty remarkable. There’s a great story here, and told in this way is just a truly amazing achievement.

Holy hell is this an amazing movie. Talk about a technical achievement that uses the medium to tell a pretty incredible story. Talk about visual creativity that takes what we’ve seen in the past and brings it to the next level.. What we have here is a war movie, shot to look like it is all one continuous shot, as it follows the characters. That means tracking shots, crane shots, and steadicam are all stitched together seamlessly, like a magician’s trick, so that the audience doesn’t notice the cuts. And for the most part, it’s moving right there with the characters, seeing and dealing with things at the same moments that the characters do, and feeling a part of the experience. Considering the amount of gunfights, and climbing over and through things, this is movie takes on the open-world, first person shooter feel of being smack in the center of a video game. Only here, the stakes are so much more real. This is a movie that takes us through the experience of World War I and does it in such a personal way that it manages to answer every question we may have had about the battlefields is the war… what was the barbed wire all about and how did one get through it? Where did the bunkers and trenches start and where did they end? This movie doesn’t just give you the answers, it lets you experience them.

Five years ago, they tried something like this with Birdman. That movie also featured all tracking, and one continuous take, and it did this behind the scenes of a Broadway play. It was incredibly cool. The only problem was that the story wasn’t anything special, and was actually a little too weird and poetic. With 1917, not only is the story much more concise and to the point, but the achievement itself is a far bigger accomplishment. Instead of being inside a controlled theater, this time the movie takes place on the battle fields and landscape of overrun France during the time of World War I. This time we are moving through bunkers, barb-wire covered fields, destroyed buildings, bridges, canals, and waterfall.

So let’s get to the story. It’s bare-bones simple, which really counts for something in today’s day and age. Two soldiers are tasked with delivering a message. The German battalion in an area has seemingly retreated, making themselves look vulnerable. The British battalion stationed nearby plans to go after them and attack. But aerial intel has figured out that it is a trap. The Germans were not retreating out of defeat, but simply in order to draw the British forces in, and then fire upon them with massive artillery. If the British forces fall for this trap, it will cost them the lives of 1,600 men. And so, our two soldiers are given the assignment from one Commander (Colin Firth,) to reach the British army fast, before the attack begins, and deliver the message to call off the attack. And as far as the reason why these two men were chosen, one of them, (Tom Blake,) has a brother who is marching in the British army that is going to be attacking. If he reaches them in time, his brother’s life will be one of the many he saves.

And so Blake is chosen for the mission, and asked to pick somebody to accompany him to the Commander’s barracks, before he actually knows what the mission is. Blake picks his friend, Colonel Mackenzie. The movie begins with the two of them sitting on the field, under a tree, sleeping, and being awoken with the message to go meet the Commander. We then follow them from the field, into the trenches, and all the way through the bunkers, past tons of men and supplies, until reaching the Commander. This walk through the bunker is pretty amazing, It’s the moment when we first experience all of the tracking. And it really makes us feel like we are a part of it. The movie is smart enough to allow the walk to take its time, as men shuffle past them, or as our protagonists often have to push to get through a crowd.

When they reach the Commander, they are given the message with a sense of urgency. Not only will they have to cross over enemy territory, in a number of locations, but they will have to do it quickly. Time is working against them, and if they reach the British area too late, then all will have been for nothing, and they will have cost the soldiers their lives. Immediately after getting the message, our heroes leave the bunker and walk out, the same way they came, once again traveling through the trenches, past tons of men. Taking the walk there, (into the trenches,) and then back (out the way they came,) definitely gets us on board, putting us right there in the moment. Another movie might have said, we already showed viewers the walk, what’s the point of showing it again, just the other way? This movie knows that it’s the little things that count. If these two guys have to make the walk twice, then we do too, because we’re right there alongside them, experiencing everything that they’re experiencing. Plus, it’s an amazing achievement, so we gladly watch as the movie shows it off for a second time. And there is a clear difference with the second walk, then the first. During the first walk, our men were relaxed and joking. During the second, the pressure is on, and there is no time to lose.

When our men reach the end of the trenches, they are stopped by an officer who tells him if they go any further, they will be at the German front lines. Blake and Mackenzie tell him they have orders to go on further, and they do, leaving the safety of the British soldiers behind. They climb up hills, crawling over the landscape, having no idea what is on the other side, and terrified about reaching the top. And we watch as they come across fields of barbed wire and abandoned German camps. With the barbed wire, they have to find the openings, in order to cross. With the German camps, they walk through tunnels and find clues (like a photograph on a bed,) and eventually find trip-wire to indicate that they have walked right into a trap.

Every place these men encounter seems promising and peaceful until something unexpected is revealed. At the German camp, the relieving element comes from learning that the German soldiers are no longer there. But then there’s the trip-wire which goes off, causing the tunnels to cave in and one of our heroes to even get buried by rubble and temporarily blinded. He has to make jumps while not being able to see, and while the tunnel continues to fall down behind him. This is Raiders of the Lost Ark-like material and it is executed brilliantly. And the German camp is just one of their many challenges.

Another one comes from an abandoned farmhouse. When our boys find that there is nobody around, and that there are supplies, including canned food and buckets of fresh milk, they are thrilled. Then a German plane is shot down right near them and the crash landing ends up directing the plane right at them. This causes them to have to deal with the enemy pilot, and it doesn’t go very well. And this is the story of the movie. Constant challenge, and no rest. No peacefulness, anywhere. Every place they go is shrouded in danger. Every place they go, they are facing a strong chance that they will be killed.

For about half the movie it’s the two of these guys together. Then, in the second half it becomes very much an individual story. This is where the movie makes you feel like you are the protagonist even more. No more conversation between two characters along the way. No more helping each other out. This is where the first-person shooter feel really kicks in. We follow a character as he has to cross a destroyed bridge while under gunfire, and then takes on an enemy sniper that he cannot see. After that, it’s through an abandoned bunch of buildings at night, with the potential for enemies hiding all around.

There’s a great run through this area at night, where for small amounts of time, you can’t see anything. The screen is just black. Our character is running through the destroyed building zone, and the only time we can see anything is when a shot is fired into the air, creating light. Then, not long after that, our character ends up unconscious, going down a water fall, and then floating along a river. And the incredible tracking captures all of this. 1917 was directed by Sam Mendes, the guy who brought us American Beauty and Skyfall. The director of photography was Roger Deakins, the best in the business, (Fargo, Prisoners, Sicario, No Country For Old Men, Oh Brother Where Art Thou, Skyfall.) It takes amazing talent to make a movie like this. But it also takes people who have the skills to push themselves into creative and challenging territory. Thats exactly what we get here. The result is a pretty amazing film.