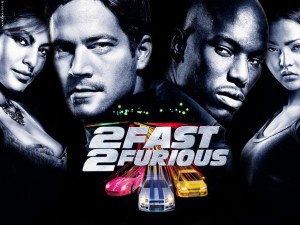 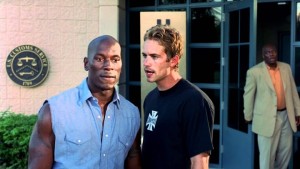 One of the weaker entries in the series, this movie has a very simple plot and car racing scenes that are only mildly exciting.

A pretty lousy movie, this one is weak in terms of plot, humor, and characters. The one saving grace is the action which is decent enough to keep us watching. Those scenes are kind of fun, as our characters race to get in cars and speed them all over town while being pursued by cops, even though they are working undercover for the FBI. This movie has a handful of action scenes that are okay, but for the most part it really doesn’t offer anything new to the series. Part of the problem is that the stars of this movie are the two weakest characters in the entire series. Tyrese as Roman Pearce, for example, has become more and more annoying in these films, doing just about anything for a laugh. Here, in his first movie in the series, he didn’t start off quite so bad, but that doesn’t change the fact that he’s not a very good character. And Brian, the star of the movie, isn’t much better. When the two of these guys get together for conversations, the dialogue reaches an all time low. There are some nice tributes to the previous film, but for the most part, this movie doesn’t work.

2 Fast 2 Furious is probably the weakest movie in the Fast and Furious series. That’s a huge statement, considering that as of now there are 7 movies, and still going strong. And to be fair, 2 Fast is not a terrible movie. It just has nothing to really offer. It’s a movie with the weakest two characters of the entire series, and terrible humor. On top of that, the story is pretty lame and overly simple. And then there’s the action. It’s certainly the best thing about this movie, but like everything else in the film, it’s not really anything special. Everything about it seems and feels routine.

The movie is about Brian O’Connell, (Paul Walker,) the guy who was the undercover cop in the first movie, infitrating a team of car thieves who pulled heists on the open road. That first film was a modern day take on the film Point Break, only instead of surfers, the guys were car junkies. With 2 Fast, there is no blueprint to follow and this movie is all on its own. The result of this is a cobbled up movie made of spare parts. Our hero again goes undercover, only this time it’s for a drug dealer and the mission is simply to get a product from one place to another.

The movie starts out with a street race, which was one of the main focuses of the first film. Here, the characters ride around at night, blasting their tanks of nitrus gas to help their cars go even faster. There’s a cool moment where a bridge is raised and the cars have to fly over it, but other than that, this is a pretty straight forward scene. The big effect here is that when a driver hits the nitrus button everything around them goes blurry. It’s kind of cool the first time you see it, but then the movie just keeps using this idea over and over again, not adding anything new to it.

Brian gets caught drag racing by the FBI and they bring him in to do some undercover work for them. He’s not a cop anymore, because of a stunt at the end of the first film, where he left Dominick Toretto (Vin Diesel) go. I like the way that this movie keeps referencing that, letting us know that this is a continuation from the last film. It’s a good thing, because if not for that, this would really feel like a completely different movie. Sure, there’s the drag racing scenes, every now and again, but Brian is the only character back from the first movie, he’s no longer a cop like he was in that film, and the story has nothing to do with heists or stealing cars.

The head FBI man in charge of this operation is Agent Markham, played by James Remar, an actor who seems to always be picking up the pieces from actors who played his role in previous films. Right now, Remar is probably best known for playing Dexter’s father on the showtime long running show Dexter. Other than that, he hasn’t had an especially great film career. He played Rayden in Mortal Kombat Anhilation, reprising the role that Christopher Lambert played in the first movie. And here, in 2 Fast 2 Furious, he’s basically playing the same role that Ted Levine played in that first movie. Only Remar doesn’t have the same presense. He’s not an actor that we want to follow. Here he plays the fool of the movie, always misjudging the situation and thinking everybody is turning on him or trying to run.

It is Agent Markham who tells O’Connor everything he needs to know about who the target is and what he needs to do. The target is Carter Verone (Cole Hauser.) Here’s an actor, like Remar, who has really never done anything special with his career. He was menacing in Higher Learning, playing a skin head, and he had a very small role as one of the friends in Good Will Hunting. Other than that, this guy hasn’t done much, and yet here he’s getting top billed as the villain of the movie. It’s not Hauser’s fault that the movie is bad, but like Remar, he certainly doesn’t have anything to add to it. Everything he says here is overly menacing, in almost a cartoon character way. Now he does say it all in a calm, cool voice, but it just seems phony and ridiculous more than it seems believable. Like he’s trying to be too cool for his own good.

Eva Mendez plays the woman in Verone’s life. She is an undercover FBI agent who is so far deep in her cover that she is actually Verone’s girlfriend. And that raises some questions. Like how intimate does she get with this guy? Does she actually have sex with him? The movie doesn’t bring this kind of thing up, but it would be a lot more interesting if it did. And you have to figure that a guy like Verone probably isn’t keeping her around too long if she’s not giving him anything. Like the other actors in the movie, Mendez really does nothing for the film. She’s nice to look at, but the acting here is extrememly limited. This was probably the first movie Mendez made where she was a recognizable name, and it was right before she really took off with movies like Once Upon A Time In Mexico and Hitch. 2 Fast 2 Furious is the movie where everybody is slumming it, knowing they are in a movie with a terrible script, and Mendez goes right along with the others, barely even trying.

There are three actors in this movie who carried over to other films in the series. The first is Paul Walker, who enterred the series with the first movie. But the other two really come in with this film. That would be Tyrese Gibson and Ludacris. Both of them were also fairly new to acting when this movie came around. Tyrese had made the movie Baby Boy, which is by far his best film to date, but with Fast, it was like he knew he was in B movie material, ans was just trying to have fun with it. Ludacris was barely an actor at the time. He just plays a guy who helps Brian out from time to time, whereas Tyrese is given a prime role, as Brian’s number two.

I do like the way that Brian gets to recruit Roman Pearce (Tyrese,) by asking the FBI agent who is about to go in on the mission with him, some car questions. When the guy can’t answer them, Brian insists that this guy is such a phony that he is going to get the both of them killed. And so the FBI lets Brian pick his own partner, and they go to Pearce. The dialogue between he and Brian is pretty awful. We’re talking about lines like, “We hungry,” and “Why are you checking her out?” Like I said earlier, these are two of the weakest characters in the entire series. When they appear in later films, they are usually the worst parts. Especially Tyrese, whose humor is just not funny at all.

There isn’t a whole lot to say about the story here. They really just drive from one place to another with the villain’s property which they had to retrive. There’s a cool getwaway moment in the end, involving lots of garages, but otherwise, this movie doesn’t do very much. And that’s a real shame considering the director. John Singleton was a pretty inspired filmmaker before he made this movie. From Boyz N The Hood to Higher Learning to Baby Boy, he made some very interesting movies. But with 2 Fast 2 Furious, he was just using it as an opportunity to make a movie about fast cars, and nothing more. This movie is definitely watchable, but it has nothing to offer the genre and is somewhat of a waste.