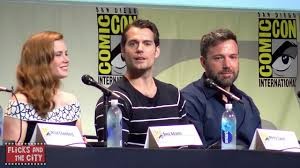 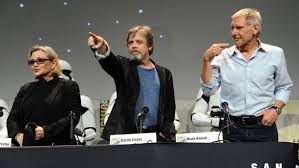 This year was an interesting Comic Con. It was the first year since the launch of the Marvel Cinematic Universe, back in 2007, that Marvel decided not to show up. That’s kind of crazy, considering that the Iron Man panel from that year basically launched Comic Con into the home for superhero movies, and also that the Iron Man panel was so instrumental to the success of the Iron Man movie, as well as all of the MCU films that followed it. Still, despite Marvel not being present at Comic Con in any way this year (not even to promote Ant Man which was a little surprising), the weekend event was still a major success. Chalk that up to the two other studios making comic book films, Warner Brothers and Fox, really picking up the slack to make up for it.

The event began on Thursday with a panel for the new and final Hunger Games movie, but the real fun didn’t start until Friday when the cast of the new Star Wars film took the stage. They were accompanied by director J.J. Abrahms, writer Lawrence Kasdan (who wrote some of the original three films), and producer Kathleen Kennedy. First, the new cast came out, including Adam Driver and Oscar Isaac. Then the original three came out. Mark Hammil (Luke Skywalker), Carrie Fisher (Princess Leia), and finally Harrison Ford (Han Solo.) They fielded questions from the audience, and then a four minute reel was shown that contained footage from the new film, behind the scenes filming, and interviews.

Saturday brought on even more. This was the big comic book movie day. Warner Brothers took the stage first to promot their D.C. cinematic universe. There are two big films being filmed right now at this studio. The first is Batman Vs Superman: Dawn of Justice. The entire cast took the stage for that one, including Ben Affleck as Batman and director Zack Snyder. They answered questions and then showed a lenghty new trailer for their movie. This trailer, just like the Star Wars footage, came in at nearly four minutes, and it explained a lot, including the connection between Bruce Wayne and the events from the end of Man of Steel.

The other big D.C. movie is Suicide Squad, and that also got a full panel with the entire cast. Director David Ayer stepped up to the plate challenging Marvel and explaining why the D.C. universe is better. This cast didn’t really answer questions, but they did bring a trailer for their film, and unlike the previous panels, this was the first time we were ever seeing footage from the movie. The trailer ended with Jared Leto’s Joker doing his maniac laughs and spouting a few lines.

The other studio with it’s hand in the comic book movie world is Fox, and they had two panels as well. The first was for the upcoming film Fantastic Four, directed by Josh Trank. That movie is being released in a few weeks and by all accounts should not be very good. This comes based on all of the news about problems on the set and the director being fired from a Star Wars spinoff project. Then again World War Z was riddled with on set problems and that turned out to be pretty good, so who knows.

The second panel by Fox was for X-Men Appocalypse, the new X-Men movie that will be released next year and the final film of this prequel trilogy which was started with Matthew Vaughn’s X-Men: First Class. Director Bryan Singer and the cast was on the stage showing concept art of Appcalypse and I believe some footage as well which has yet to be released to the publc. The same can be said of the Deadpool panel that followed. This one featured Ryan Reynolds, Morena Bacano, T.J. Miller, and other members of the cast as well as the director. They showed their first trailer.

So there were six panels that really blew the roof off of Hall H. The Star Wars, Batman Vs Superman, and Suicide Squad panels, as well as the X-Men, Fantastic Four, and Deadpool panels. Now, on a negative note, there were no major announcements here. That means nothing about who Chris Pine is playing in a DC universe film (Green Lantern or someone in the Wonderwoman movie), nothing about Tyrese (also rumored for that Green Lantern), nothing about Ben Affleck directing the first new Batman movie (news of that broke about a week after), and no Justice League lineup panel. And that’s all from D.C. I’m not sure what Fox could have broke regarding news, other than maybe a Fantastic Four – X-Men crossover film, and it’s too bad they didn’t do that, because it would have been great promotion for people to go out and see this new Fantastic Four movie. Still, with all the new footage, the lack of announcements was not such a big deal. Hats off to both Warner Brothers and Fox for stepping up to the plate in Marvel’s absense. Can’t wait to see how all of these films turn out.