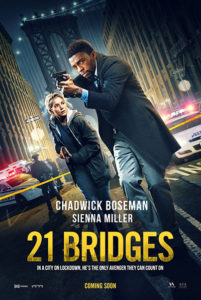 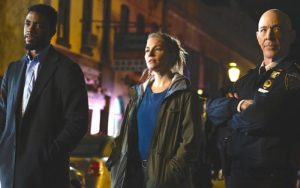 A solid cops and criminal man hunt movie, this one is pretty good in its first half, but just falls into way too many cliches in its second.

21 Bridges is the rare movie where you can predict everything that happens, and yet it’s still kind of fun watching how they get there. You know from the trailer exactly who the good guys are and the bad guys are. You know what the “twists” are going to be. In a sense, they aren’t really twists for the audience, but more so for the main character. He’s a detective with a reputation for shooting first and asking questions later, (not that he ever shot anyone who didn’t deserve it, but just the actual number of times he has used his weapon in the line of duty.) And now this detective, Andre (played by Chadwick Boseman in his first role since playing Black Panther,) has to take on the case where a whole bunch of cops were murdered by two guys trying to rob a store of a stash of  drugs. The movie is smart in the way it follows both the cops and the criminals almost equally. The first half is far superior, because it is the second half that starts to feel way too familiar and predictable, but even still this is an enjoyable film.

We’ve seen corrupt cop movies before.We’ve seen them in New York before. In fact, director Sidney Lumet made a career out of making these kinds of movies, from Serpico to Prince of the City to Night Falls on Manhattan. This genre in this location has been worked over more times than anyone can care to imagine. We’ve gotten movies where the level of corruption is centered on just the low level detectives or patrolmen (Cop Land,) to movies where it goes all the way up to the top in politics, (City Hall.) So getting another one of these movies, now with 21 Bridges, seems a little suspicious. Especially since the genre was so big in the seventies, eighties, and nineties, but has pretty much been dead in the decades ever since.

So why make a movie like this now? Is it to make a throwback to those older movies, or is it to take this older formula and spin it into something new? The answer is both. 21 Bridges is a fun movie that tries to take an existing, throwback genre and present it in a different way. First, let’s start by saying that this movie tries to hide that it is a corrupt cops movie. The clues are there, of course (and they’re pretty obvious,) but the corrupt cops angle doesn’t come out until the end. So calling this a corrupt cops movie feels like it’s not really being truthful. Instead, this is mostly a manhunt movie.

But before we get into that, let’s stay with the corrupt cops angle for just one more moment to talk about how this movie doesn’t understand giving things away. You see, this movie acts like we should be surprised when it turns out the cops are corrupt. Like that is a big twist. But really, this idea is pretty clear even from just watching the trailer. In that trailer, we meet JK Simmons as the officer in charge of the cops who have been murdered, telling Detective Andre Davis (Chadwick Boseman,) that he aants the case closed quickly. Then later in the trailer, we see Simmons say that if Andre goes down the path he is about to go down, he’s on his own. Kind of obvious. But even if the trailer didn’t give it away, the movie shows us things from the criminal’s perspective and so we see the cops come into the liquor store, ready to deal in drugs. So we know they are corrupt. Yep, definitely no surprises here.

But what makes this movie kind of unique is that by showing us the criminal’s perspective as well as that of the investigating officers throughout the movie, this one actually puts the viewers in a place where they are somewhat sympathetic to characters on both sides. The last great movie that did something like that was Heat (back in the nineties.) Like that movie, we are certainly not on the cop killers side. That would be Ray (played by Taylor Kitsch,) But his partner, Michael, seems to be the one with some morals and values. He condemns Ray for killing the cops, and we later learn that he was young and taken under Ray’s wing when he older brother died. We are meant to sympathize with Michael.

Now, obviously we are also on the side of the detective, Andre (Boseman,) every step of the way. After all, he is the film’s protagonist. He’s the actual star of the movie. But we are also there with the killers in every encounter they have and every move they make, and that is something kind of unusual.  Just like with Heat, we are somewhat divided here. And the movie gets that point across by giving us other guys as “the real bad guys.” Heat did the same thing, with the character Waingrow being the real bad guy. Here, it’s the corrupt cops. Sure, it’s bad that they run drugs out of the precinct, but to think that this leads to Michael acting like somehow the cops are worse than him… that they are the real bad guys, and that maybe he is entitled to something, or being treated unfairly, just because the cops were dirty. The cops taking money under the table still doesn’t change the fact that these two guys, (Ray and Michael,) killed a bunch of cops. It doesn’t suddenly make them right for doing that.

The cops angle doesn’t come out until the end, but it is worth discussing so much, because it’s where the movie really falls apart. For eighty percent of this movie, it’s a solid cat a mouse, manhunt film, and that’s a very cool thing. The movie starts out by showing Andre as a boy learning that his father has been murdered and attending the funeral. Cut to over a decade later, and Andre is a detective with a record for shooting down the bad guys. He’s at a deposition, when we first meet him, where he needs to justify   how often he has discharged his weapon and killed criminals. This is a guy who doesn’t hold back. Andre insists it was all in self-defense and completely necessary, and from an audience point of view, this is the kind of guy you want to be the protagonist of an action movie. A guy who isn’t afraid to get his hands dirty when it comes to serving up justice. As it happens, the reputation is also why Andre is picked for the job. He is known as being “trigger happy,” and a whole lot of people on the force want these two guys who murdered a whole bunch of cops to be found and killed. So we get that back story as a reason why Andre might shoot first and ask questions later.

We see the liquor store robbery from the point of view of the two criminals, and that includes their surprise about how much cocaine is being stored down in the basement freezer of the place. They thought they were stealing thirty grams of cocaine. What they walk into is three hundred. At this point, they keep talking about how this is a setup. But what does that mean? That somebody on the inside wanted them to steal all this? None of that is every explained, although it sure does sound pretty cool. Instead, the cops show up and we get a shootout that spills out into the streets and becomes a car chase. It’s an exciting scene, and by the end of it, the two killers are fugitives on the run, knowing that they will be looking over their shoulders for the rest of their lives.

Now we see Andre come in and work the scene. He’s got some masterful precision, figuring out exactly how many people came in to rob the store, and being pretty sure of himself. He explains his reasoning and we go with it. Especially since nobody argues back at him after he gives his explanation. Andre is given a partner named Frankie Burns (an unrecognizable Sienna Miller,) and she tells him that he can either argue and fight about having to work with her, or he can use her. He decides to go along with it. And there are some interesting conversations between them, here and there, like one where she makes him promise that he’s got her back, no matter what.

From here, the bulk of the movie becomes a pretty standard cat a mouse chase movie. The cops follow all the usual clues, including tracing the license plates and questioning the woman who the car is registered to. But there are two angles that make all this unique. One is that they close down Manhattan. This is of course where the movie gets its title from (there are twenty one bridges that lead into and out of Manhattan,) and the other is that we keep seeing the hoops the criminals must jump through, not so much in avoiding the cops, but in getting new identities and getting out of town. They decide to go back on the deal they had about who to sell the cocaine to and who to use as the middle man, and to bring it to the buyer themselves. Then they ask the buyer for his connection to a “fixer,” who can both clean the money for them and also give them new identification.

Now this is about the halfway point of the movie, and it’s where things start to get kind of dumb. First of all, the corrupt cops use the same fixer that the cocaine dealers use. And so that fixer turns on the corrupt cops to side with these two criminals. He actually gives them hard drives loaded up with evidence against the corrupt cops. This idea seems pretty amateurish. And it leads to the second half of the movie, which slowly becomes more and more about the corrupt cops. But there’s more to not like, starting at this point. There’s the fact that our two criminals escape the building with the cops breaking into the fixer’s apartment and we never see how they got down to the street. We see them climb up onto another, higher floor of the apartment and then the next thing is they’re running down the street. Things like that, or like all the times that cops are shooting at them as they run, and yet they still get away, feel silly. But even still, if you can suspend reality and treat this as a B level guilty pleasure movie, it’s kind of fun. And the way the ending goes in a new direction, leaving the city setting and heading into the suburbs, reminds me of the end of Edge of Darkness (the Mel Gibson remake,) about going all the way up to the top in chasing down the corruption. It might be kind of silly, but it’s still a lot of fun. And that pretty much sums up the movie. It’s not the smartest film, but if you can get past some of the ridiculousness from time to time, it’s still pretty enjoyable.