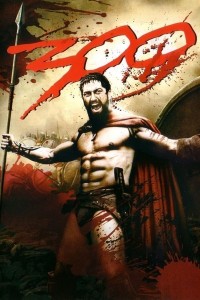 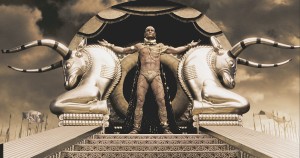 Fantastic visuals and state of the art action all set with historical battles as the backdrop of this stunning and creative movie.

300 is an exceptional film because of the ways it seamlessly combines action with visual artistry. This movie and sin city together represent the best of what graphic comics can look like when brought to the screen. they also both happen to be based on frank miller comics (probably the best graphic novelist in the business). and they both don’t hold anything back when it comes to action. but other than that, the two movies are different as can be, and unlike sin city which tells a fun, crime, noirish story, 300 digs deep into history.

this is the movie of the battle at thermopalae, a small battle made famous mostly because of how incredible the spartans fought. the battle itself was really a part of the much bigger persian wars. those wars were of persia vs greece, and instead of tackling all of the battles (including marathon and the fleet battles of athens), this comic and movie wisely stick only to the involvement of the spartans.

And the movie is not only about the sparta vs persia battle, but about spartan life as a whole, starting out with a voice over narration of how children are brought into the world in sparta and then how they are raised. we don’t know it at the time, but as we watch a child being trained to fight, we are really watching king lionidus as a young boy growing up in sparta.

The first big moment lionidus (gerard butler, in his breakout role) has as king is when xerxes, ruler of persia sends messengers his way to deliver their king’s orders. xerxes demands that sparta bow down to him and provide offerings to show submission. lionidus refuses and kicks the messengers into a bottomless pit instead. it’s a moment that demonstrates what is to come, not only from the action, but from the artistic way it is all filmed. the movie cuts to slow motion as the messengers go over the side of the pit and even follows them down until they pass through into total darkness and disappear from sight. this is only the beginning.

King Lionidus takes 300 of his spartan warriors to battle. he leaves most of sparta, including the majority of the army, behind. before he sets off, he goes and visits some deformed old men who are like the wise men of the city and must either offer their blessing about him going to war, or else refuse. they consult the oracle before making their decision, and we are treated to watch all of this. we watch the oracle dance around and use her spiritual ways to figure out if going to war will be successful. we watch the old, deformed wise men listen to what she has to say. and we watch them report back to lionidus.

Soon after this visit, the battles begin. It starts with lionidus and his army taking on some of the weaker persians, men who are sent out like the pawns, mostly to feel out the enemy and see if he is worthy of greater soldiers to fight. the spartans easily have their way with these men and tear up the battle field.

But then things get much more challenging. giant beasts are let loose on them, including a man who looks like he is part ogre and is chained up until the persians cut him loose. there’s also a charging battle armored rhinocerus and gigantic elephants who try to crush the spartans along the side of a cliff. and then there are the immortals, wearing their face armor as they attack, and the king’s magicians who throw bombs with lit wires at the end, causing large explosions when they go off.

The battle take up nearly the entire second half of the movie and they are absolutely fantastic. and the film is smart enough to give us an enemy that we can see as well, as xerxes steps onto the battle field and meets king lionidus face to face. His chariot is magnificent and his prescense is spectacul, towering like a giant, with a voice that sounds like thunder. Xerxes actually has a number of scenes in the movie, and that;s a great testament to how smart this movie is, knowing that we need an enemy we can picture and not just some unseen threat. the more we see xerxes, the more we understand what the spartans are fighting against and why. xerxes promises lionidus great glory and riches, but he wants submissions first and for lionidus, that is too much to ask.

Aside from everything taking place on the battle field, the movie also spends time back in sparta where the queen fends for herself against a corrupt senator, played by the wire’s domenic west. the queen finds herself being threatened and propositioned by west, and even having to go in front of the council in order to oppose him and ask for them to send aid to her husband, out on the battlefield. Cutting back and forth between the hardcore action of battle and this quieter, but equally evil situation in sparta, is another touch of the movie’s that really helps maintain the balance by not overloading us with anything all at once.

This movie was made by zack snyder who was coming off his dawn of the dead remake, which was better than anyone expected. 300 is his masterpiece. after that he made watchmen, which was good, but a little too long and a little too serious. 300, on the other hand, finds the perfect tone and style. everything about it works, from the pumped up rock and roll music that plays over a number of violent scenes to the corny, but fun one-liner battle cries of the men. I love how snyder captured the mentality of these spartans and how not only were they unafraid of dying, but they hoped to die a glorious death, where they would face real opponents and worthy battle aversaries. The movie truly feels like a graphic novel come to life, as if painted for the screen. And I love that snyder does not hold back when it comes to blood or graphic violence. this movie goes for the jugular and nails every moment,