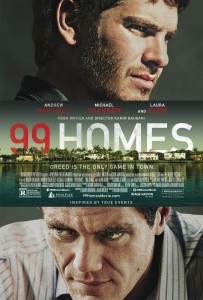 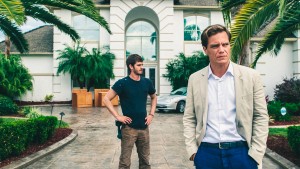 A movie with an interesting premise that takes us into a unique world from a new angle, ends up falling short of the mark when the second half does not provide enough conflict.

This is an interesting movie because of the world it explores and the way it takes it’s main character from one polar opposite situation to another. Dennis Nash is a family man, living at home with his son and mother, when they kicked out of their house and forced to move into a motel. The eviction comes as a surprise to them, but even more surprising is that Nash goes to work for the man who took ownership of the place. That’s the first half. In the second half of the movie, we watch Nash become more and more corrupt. He basically sells out until he reaches a line that he has qualms about crossing. The second half is where everything seems very familiar. There are all kinds of problems with it, including a mother-son story that never gets resolved.

99 Homes is a movie built on a pretty good idea, that just can’t carry through for a full film. The idea here is that a man named Dennis Nash, (Andrew Garfield,) lives with his son and mother, and one day finds himself evicted from his house. He has no idea why. But what ends up happening is he goes to work for the man who kicked him out, and finds himself on the other side of the evictions, delving into a world of corruption and greed. This movie basically takes the initial premise of The House of Sand and Fog and spins it in a whole other direction. Unfortunately, it’s a direction that is not as good.

The first half of this movie works because it puts us into a new world that we know very little about. First, we sympathize with Nash and are right there beside him when he pleads with a judge and tries to explain his case. He tells the judge that  two different branches of the bank told him two different things and that he was told not to pay the bills because there was a mistake on them. The judge isn’t interested in stories. He probably gets stories like this with every case, and he barely listens as Nash pours his heart out. That leads to him having to move his family into a motel.

But then something unusual happens. Nash’s path crosses with the man who took his house, Rick Carver, (Michael Shannon,) again. This happens because Nash is a construction worker and one of the men in the crew that went into his house, when he was being kicked out, stole some of Nash’s tools.  Nash goes and finds these guys who work for  Carver.  Nash accuses the man of stealing the tools and gets in a fight. A major construction project comes up right at the same time, and Carver, who is there, and also knows that Nash is in construction, asks him if he wants a job. Nash accepts.

Now this is no ordinary job. It’s perhaps the most disgusting job imaginable.At the house, where Carver and his crew are trying to take over, the sewage is all backed up and the place is covered in the worst kinds of things imaginable. On top of that, the smell is so bad, nobody can even get near the place. The inside of the house is covered in raw sewage. Anyone who even approaches the house, quickly turns back. And then comes Nash, needing the work, the money, and the opportunity. He goes in. He takes initiative. Not only does he go in, in fact, but he also manages to convince the others to go in with him. Carver is impressed.

Carver starts giving Nash more and more responsibility. First it’s to go around towns and look at houses he can buy. Sometimes the two of them go on these rides together, and on one occasion they notice that a man is stealing water and cable from the house next door that nobody lives in. Carver is the one paying the bills for that house, since he is the one who took ownership of it and never shut those services off. Carver goes over and reprimands this man. Nash tries to go easy on him, but Carver doesn’t accept that.

The movie does a nice job of establishing Nash’s character in the first half. He is clearly a determined father, willing to do whatever it takes to keep his family home, that he grew up in. We never learn what happened to Nash’s wife, and the movie wants to keep it that way. It doesn’t ignore her altogether, or anything like that, but instead puts her into the dialogue with one conversation where Carver asks him if it was a way too young – prom, kind of thing. Nash says it was, and that’s the end of the discussion.

As the movie goes on, Nash begins to change. For one, instead of riding around looking for properties that Carver can buy, Nash starts being the guy to kick people out himself. Carver tells Nash about a rewards program called “Cash for Keys,” that the two of them can completely exploit. The program and expression means that people who leave their house in good shape and turn it over in a nice and civilized manner will be given a good sum of money from the bank. Carver instructs Nash to go and find houses where people left the place in good shape and didn’t know about the program. Then they claim that the people did know and want the money for the reward. My only problem with this is that the bank is for some readon paying them, Nash and Carver. I’m sure they have a fake account that the money is going into or something, but even still, are they making up people’s names too? The whole thing seems way too suspicious. And who is the bank sending the money to? Carver? If so, and if it is Carver’s job to then distribute the money, you would think the bank would follow up on that to make sure that he had done it.

Of course the point of all this is to show that Nash is losing his moral compass. Carver also instructs Nash and his friends to start stealing expensive equiptment, such as the water systems and air conditioning units out of the houses that Carver has purchased. Then they can make claims with the bank to say that these things were stolen, and receive payment for them, before putting them back in, and keeping the money the bank payed them. This is but another way that Carver is corrupting Nash. And the rewards are big and inticing. Nash sees everything he has been working for come right back into his life. And instead of stopping there, and being happy about that, he keeps on going. He ends up trying to get a house that’s even bigger than the one he was kicked out of.

Of course none of this makes any sense. It’s the reason why the second half goes off the rails. There’s no way that Nash could afford the new house he has looking at with its luxury pool in the backyard. Sure, he is making nice money now, working with Carver, but realistically the kind of money we are talking about him being able to put down for the house is the kind that people spend decades saving up for. There’s no way that he made this kind of money so quickly. Sure, it can be assumed that Carver is giving him a deal, and that the idea is, if Nash will do whatever Carver wants, then Carver will take care of him, but it seems like a little too over the top. And so does what happens with Nash’s mom and kid. Let’s just say, the mom does something that can easily be considered kidnapping, and the movie never even addresses it.

If all of this wasn’t bad enough, the final act becomes a total and absolute cliche. Nash is pushed to the limit with how much Carver is asking him to do and how far he will go. The movie doesn’t have any reservations about crossing the line that could make this kind of thing actually work, by playing it a little reserved. The same kind of attitude that allowed the movie to not tell us the whole story about Nash’s wife is completely missing from the second half. And to make matters worse, we don’t even hear a conclusion to the story about Nash’s son and mother. Talk about an ending that falls apart. It’s unfortunate because the first half of this film was very solid and build on a strong foundation. The journey of where it ended up going, however, became all about falling into usual, cliched territory.