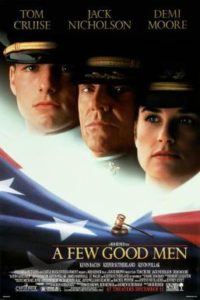 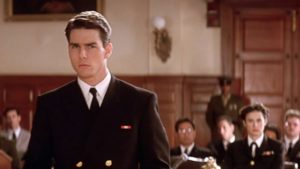 A masterpiece of a trial movie.

This movie is nothing short of amazing. It takes an incredibly unusual military situation and makes an investigation and then court case out of it when two marines are accused of murder. Only the stakes aren’t that simple. The characters definitely did what they are being accused of. Only the question is, were they following orders. The high ranking military officials say no. And it’s up to a young and inexperienced law team to prove that there’s more to this story than anyone is willing to admit. This movie is filled with humor, excitement, clever dialogue, and twists and turns. Surprises come around every corner as these character keep learning new developments or having new realizations. And the characters themselves, as well as the acting here, is top notch. Nicholson and Cruise have both never been better. The two of them find themselves surrounded by an all star cast, of recognizable faces filling nearly every role. The writing is spectacular. The story keeps moving. And we find ourselves strapped to our seat for one hell of a thrill ride up the military chain of command.

This has got to be one of the greatest trial movies of all time. Maybe even the greatest. It’s this and then it’s 12 Angry Men. Then somewhere down the line you have things like Primal Fear and My Cousin Vinny. But A Few Good Men is it. This is the movie that got Jack Nicholson giving his greatest performance and it was in a supporting role, (sorry As Good As It Gets, which Jack won the Oscar for, but that romantic comedy is entirely forgettable.) A Few Good Men, on the other hand, stands the test of time. This was Tom Cruise at his best. Sure, he would go on to become the action star of the Mission Impossible series, but as far as best movie goes, and standing toe to toe with Nicholson, this is it. It’s even Aaron Sorkin’s best, (the screenwriter,) who would go on to make the Social Network, an excellent film that perfectly captured one of the biggest success stories of our time. But nothing tops A Few Good Men for any of these people, and that’s because it is the ultimate trial movie.

First off, it is an incredibly unique case. This isn’t a case about murder (at least not the usual kind,) or robbery, or rape or anything that we might get from another film. This is a movie about a “Code Red.” That’s a military term for giving a guy a bad beating in order to teach him a lesson. And the one in this movie just happened to lead to death, although it wasn’t from the beating itself, but more from an unusual medical situation. The movie is about the military and a military trial. And it involves two marines who are on trial for what they claim, was following orders. Yes, the reference to Nazis and the Nuremberg Trials, (the most famous case of men claiming they were “just following orders,”) is made.

At the start of the movie, we see the event that sets all of this off.  We are at Gunatanamo Bay, Cuba in the marines barracks, and it is the middle of the night. Everyone is sleeping. All of a sudden, two men rush into a room, grab a marine out of his bed, tie him up and gag him. Cut to black.  This is the crime that will be put on trial in this movie. As it happens, what the men did to this marine, Private William Santiago, led to him dying just hours afterwards. Whether it was intentional murder or not remains to be seen, but there’s no doubt that it was what the men did to him that led to his death. And the men who did it are the clients of our protagonist, a defense lawyer trying to get them off. Not exactly your usual movie, where the good guy is defending two murderers and the movie wants you to see their side.

Back in Washington D.C., we meet Joanne Galloway, (Demi Moore,) a hungry lawyer who wants the case of the marines charged with killing Santiago. She goes to see her higher ups to see if they’ll give her the case, but they refuse. Instead, they tell her she can help on it, but she will not be lead council. That offer is going to Daniel Kaffee, (Tom Cruise.) Galloway goes to see Kaffee and meet him, and he is standing at the batter’s plate of a baseball field, teaching softball, hitting grounders to young players that he is coaching. Galloway starts speaking to Kaffee and right away realizes that this guy takes everything as a joke. And he’s pretty funny too. Tom Cruise plays this guy as incredibly likable, not taking anything too seriously, but also ready to crack down when it becomes necessary. And in his first batch of scenes, he’s just a goofball.

Galloway can’t believe that this guy who is out of law school less than a year was given lead council over her. But then she realizes what’s going on. It’s a combination of sexism and the higher ups just not wanting these guys to get a fair trial. After all, if they’re claiming that they were just following orders, than they are implicating their higher ups in the events that led to murder. And their higher ups involve some pretty high ranking military officials. In fact, it goes all the way to Colonel Nathan Jessep, (Nicholson.) From there, we flashback to see the scene where Jessep learned about Santiago.

We hear the letter of Private William Santiago, read by his voice over. Santiago is  a marine who just can’t keep up with the other men in his unit. He falls behind on every run, overheats and dehydrates, and is absolutely miserable. Santiago wants a transfer off the basend Santiago writes a letter requesting the transfer. When we are done listening to the letter, while watching clips of these different things happening to Santiago, (including him having to eat by himself in the mess hall because he doesn’t fit in with the other marines,) we end with Jessep’s first line… “Who the f- is Private William Santiago?” He is in a meeting with two men who are is second and third in command. There is Colonel Markinson, (JT Walsh,) and Kendrick (Kiefer Sutherland.) And the three men hash out what to do about this problem. Markinson suggests transferring Santiago off the base, like he requested. and for a while, Jessep plays along, going so far as to nearly get the president on the phone while doing a mockery and charade about the idea of just transferring everyone and surrendering. But then Jessep has the idea to teach Santiago a lesson, and the rest is history.

Back in DC, Kaffee speaks to his clients, Dawson and Downey, and learns that they are claiming it was indeed a Code Red. He then decides to go down to Guantanamo Bay, along with both Joanne, and the other attorney working with him, Sam Weinberg, (Kevin Pollack.) If the cast is starting to sound exceptional, that’s because it is. Nearly everyone in here is a big star, including the opposing council, (Kevin Bacon,) as well as tons of witnesses that take the stand, (Cuba Gooding Jr, Noah Wyle, Christopher Guest.) The two actors that aren’t stars are the two men on trial, but other than them, every part is filled by a major acting talent, and it’s a whose who of famous faces here. And this lead to the Guantanamo Bay scene, (Nicholson’s second of only three scenes in the movie,) where Joanne and Kafee manage to get Jessep wound up, even when they are not necessarily expecting to.

Upon returning from Guantanamo Bay, the three person law team decides they have a case. And they’re going to trial. Which means they are going to try to takedown their higher ups and take this thing as far as it will go. And so starts the trial. It is a very long trial, which happens to be a great thing so long as the witnesses each provide new information and add to the story. In this case, they most certainly do. Sometimes, it’s through humor, (and also good, smart points,) like what happens with Noah Wyle and talk about knowing where the mess hall is, being compared to knowing what a code red is. Sometimes it’s to put even more people on trial, like the doctor, played by Christopher Guest. And sometimes, it’s to work themselves up the chain of command to get closer and closer to the big fish.. the real target.. Nathan Jessep. That means they have to go through Kendrick first before getting to Jessep. In many ways, this feels like an action movie or videogame, where you have to take out the lower ranking bosses before getting to the big boss.

The Nathan Jessep scene is such a classic that the line, “You Can’t Handle The Truth,” is probably Nicholson’s most famous acting line of all time. It’s so big and so famous that it was even in the trailer, (most movies don’t showcase the climax in the trailer, especially when it is a line of dialogue that gives away a lot.) But this movie had no choice, and made the right decision, considering how powerful and iconic that line is. The testimony of Jessep is long and thrilling. It is a cat and mouse chase, going back and forth between Kaffee and Jessep and it covers all sorts of ups and downs, power changes, trickery, manipulation, and getting one character to take the bait. it is absolutely perfect. A perfect climax. And it also involves new twists and turns, like something that Kafee uses to prove that Santiago wasn’t being transferred and his lack of packing any items up. By the end of the scene, we have seen it all, and it has been pretty fantastic.

A Few Good Men is such an exceptional trial movie for a whole host of reasons. For one thing, it definitely feels like a lot of time is spent on this trial, and yet it also feels like at least half of the movie takes place before the trail ever begins. That means the movie takes us through the investigation first, (including that Guantanamo Bay tour and interview,) and then only after that, gets into the trial. Another thing that makes this movie great is the humor. Both Kaffee and Weinberg for filled with quippy one liners, and seem to be jokesters until it’s time to take things seriously. And then there’s the backstory about Kaffee’s father, and how he’s living in his father’s shadow. Normally, this would be a cliche, and maybe it is here too, but this movie sure does make it work. Especially in a rain soaked scene where Kaffeee gets drunk, loses it, and takes an unpopular position in large part because it is most definitely not what his father would have done. And then there’s the way that Galloway and Weinberg might be on the same side of the trial, but have totally different views about their clients. The fact that this movie has so many different points of view and finds the time to explain them all is pretty amazing. And these are just the side players. The real highlight here, of course, is Cruise and Nicholson, and boy do they both deliver. This is quite the remarkable and thrilling movie.