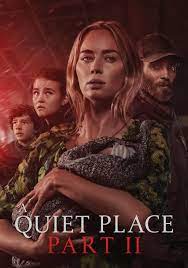 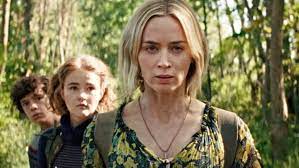 A Quiet Place Part 2 is okay. It’s the follow-up film to a modern masterpiece, and that means it’s very hard to top the original or even be in the same ball park. This movie isn’t. And while that’s not surprising, the thing that most definitely is surprising is that this movie doesn’t even try to play by the same rules. The first movie worked because it was different. It was basically a silent film, which is to say that there was certainly sound, but very little if any talking. In fact, there was really only one scene of talking, when two characters made it to a waterfall, and even there the talking was kept to about two quick sentences.

Having a “silent” horror movie was something very different, creative, and unique. The sequel doesn’t even attempt to replicate that. There is talking all over this movie. Characters meet other characters and have lots and lots of conversations. And while it’s understandable for a movie not to want to repeat its predecessor, and instead to try and offer us something different, when the first movie was built around a single cool concept, to then take that concept away is definitely a mistake.

Of course, the movie would claim to be about an apocalyptic time when people are under attack by monsters who can hear but not see you. And all of that is very true of both the original movie and its sequel. But having characters only speak in sign language in the first movie went a long way. Having the only sounds be the sounds of them moving around really made a difference. And all of that is gone here. So are other things, such as the story which was about the family striving to make it together. In the sequel, the story actually divides the characters up and sends them off on different missions.

We’re talking about two or three missions in particular. The first and main one is that of Reagan Abbot, (Millicent Simmonds.) She played the daughter in the first movie, and is back again here. Reagan is the oldest child and the most mature. She is also deaf, which is a very interesting dynamic to throw into a movie about hearing and avoiding being heard. It was very smart of the first movie to do this. The sequel doesn’t really have anything new to add, where those ideas are concerned, but does still keep them alive. That means we again get to hear scenes from Reagan’s point of view, which is to say we see things happening behind her, but watch as she has no idea what is happening because she can’t hear them at all.

In this movie, Reagan goes off to find a radio signal (not unlike the plot of I Am Legend or 28 Days Later,) and to bring help to the people on the other end of it. At the end of the last movie, she figured out a weakness of the monsters, which is the sound and signal made by a hearing aid. In this movie, she’s trying to get that sound over the radio waves to make it widespread, and to really hurt the monsters as much as possible. And so she goes out looking for this supposed camp where survivors might be holed up, and her mother, Evelyn (Emily Blunt,) sends a man they have come across (Emmett, played by Cillian Murphy,) after her.

Let’s talk about Emmett for a moment. To do that, we really have to talk about the beginning of the movie, which is the absolute best sequence in the entire film. The movie opens on day 1 of the creature attacks. It shows the world before the attacks, and how normal things once were. And it shows the transition between this world and the world of the monsters. We begin the movie with Lee (John Krasinski,) going into a store to pick up some groceries. It’s the same store that the characters were in during the opening of the first movie, which is a pretty cool tribute in the way that it shows the rocket ship toy on the shelf which caused so much trouble for our characters in that earlier movie. Lee picks up what he needs to and then has a brief conversation with the store owner who is glued to the TV, watching some kind of chaos, which he can only guess is a bomb.

Lee then goes on to his son’s little league game, on a crowded baseball field. This is life as usual for the community, and we get to meet the entire family in this sequence, as most of them sit on the bleachers. We also meet Emmett, the Cillian Murphy character, who is a neighbor with two sons of his own. This character will come into play later on in the film. And then our characters at the baseball field spot something in the sky, which looks like a massive explosion heading down to earth, and all of them run to their cars and evacuate. Lee and his family drive into town and that’s when the monsters start attacking. Lee and Reagan band together and hide out in a restaurant while Evelyn and her two sons take another car, and deal with the monsters themselves, while also in the town. Then entire sequence is fantastic, and the movie is smart to stretch it out for three difference scenes. Unfortunately once it ends, the movie never quite reaches these high points again.

After that prequel of an opening, we join the characters right after the events that ended the first movie. We even get to see a bit of how that first movie ended for a second time, reminding us of exactly how things left off. Our four characters who are left, Evelyn and her three kids, Reagan, Marcus, and the newborn baby, leave their home, which is now on fire, and walk through the woods and the town and anywhere else they can, looking for a new place to stay. They come across an old abandoned warehouse, but unfortunately Marcus steps into a foot trap and is severely injured. That’s when the first creature comes out and both Reagan and Evelyn team up to kill it. Reagan uses her sound technology and Evelyn blasts it in the face with her shotgun.

From here, we meet Emmett, who has been living on his own in the warehouse ever since his family died. Emmett becomes a major character in this movie, more or less taking on the Lee role from the first film. Only instead of keeping the family together in a single location, this movie has Reagan leave them and then Evelyn send Emmett out to find her and bring her back. It leads to a story where Reagan and Emmett are out on a quest, and Evelyn and her other two children are back at the warehouse trying to stay safe. Only at one point, Evelyn leaves to get medicine and the story branches out into a third plot line, as we follow both her going to the town, and also Marcus taking care of the baby back at the warehouse.

The Emmett and Reagan story becomes the biggest story of the film. The second half of the movie is almost entirely about them. First, they deal with a monster attack inside a train car. Then it’s the mysterious people on the docks who attack them. Then the island and community where people have found peace away from the creatures. All of this feels right out of the TV show Lost, starting with the people on the docks. It’s an okay story, and it’s definitely far removed from the plot of the first movie. The amount of creatures we see in this film has also multiplied to huge amounts. It’s a given that they can’t go back to barely showing the creature, like the first movie did, but by the climactic moments of the movie here, it gets to be overkill. We are literally following one creature attacking one set of characters in one story, and another creature doing the same in another story, both at the same time. This sequel isn’t bad, but it’s also not all that great. It doesn’t really play by the same rules as the first movie, and that’s a bit of a problem.