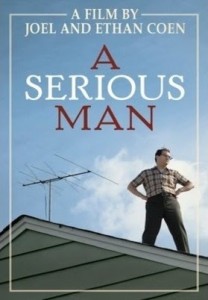 A Fantastic Coen Brothers black comedy, so funny because it is smart enough to find the humor in frustration and time it’s punchlines around that subject perfectly.

A Serious Man is a very well-made, perfectly timed black comedy. everything from the opening sketch about an old jewish man who is possibly mistaken for a ghost, to the very jewish characters in the life of Larry Gobnick, are hilarious. This is Larry’s story, and it’s the story of how his life starts to come apart right in front of his eyes, and there isn’t really anything he can do about it. Larry’s wife wants a divorce, his kids ignore him, and his brother is in all sorts of trouble. As if that wasn’t enough, he has one annoying neighbor, one seductive neighbor, and a student who attempts to blackmail him over a grade. it’s Larry’s reactions to all of these things that make the movie so great. He goes to see three different Rabbis and gets all sorts of ridiculous advice. Larry is the rational guy in a world of absurdity, and this movie has a lot of fun with that storyline and the crazyness that surrounds this character.

A Serious Man is a Coen Brothers movie that shows off just how great these two filmmakers really are. It’s their most artistic movie in ages, perhaps since The Man Who Wasn’t There, in 2001, and it is filled with great atmosphere and hilarious characters. It is the coen brothers’ follow-up to Burn After Reading, which marked their most star-studded film to date and a comedic effort that wasn’t all that funny. Well, this movie is the answer to that and in a sense the exact opposite. A comedy that puts character ahead of story and trades in an all star cast for a bunch of no names. The Coen brothers reached their all time high point two years earlier when their movie, No Country For Old Men, won best picture of the year. Now, with A Serious Man, they strive to show that they can do the same thing again, only for comedy. They more than achieve their goal.

A Serious Man is about a family man in crisis. That man is Larry Gopnick, a Jewish college professor of math proofs and logic. The movie opens with his son, Danny, sitting in Hebrew class, listening to the music of Jefferson Airplane on his headphones. He is caught by the teacher, an old man with no tolerance for this sort of thing, and the headphones as well as the twenty dollar bill stuffed into the case, are confiscated . Getting the headphones back becomes Danny’s mission throughout the movie, in large part because of the money inside of it.

And then we meet Larry, our main character, presenting a proof about a dead cat to a large lecture hall and then meeting with a Korean student who is unhappy with his grades. The Korean student offers solutions like a retest, only Larry is not open to these ideas. This Korean student and the way he presents ideas to Larry, wanting to keep the retest a secret, is very funny. He’s got a strange way of interacting and Larry humors him and treats him as if his arguments are actually worth talking about. And then he finds the envelope of large bills that the Korean student intentionally left behind. It’s clearly a bribe.

When he arrives home, Larry sits down with his wife to find out that she wants a divorce. This comes as surprising news to him and the real kicker is that she has fallen in love with Sy Ableman, a much older and more calm man. Larry can’t believe his ears when he hears this, and is thrown completely off balance, uncertain of what to do next.

He has his brother, Arthur, (Richard Kind,) staying at the house with his wife and family, and then at the university, he’s up for review and possibly getting tenure. The man who is the head of the department comes to see Larry and talks of how there have been anonymous letters written to the board urging them to not grant Larry this tenure.

The movie repeats characters and meetings as it goes along, each time building up and getting more intense. Larry meets with the Korean student a second time and then with the student’s father. And the man who is head of the department continues to make visits as well. But the real story is at home, with Larry and his family.

Sy Abelman is a lot of fun, and at times seems much more interested in Larry than he even is in Larry’s wife, Judith, despite the circumstances. Sy hugs larry every time they meet and does it in such a way that he smushes Larry’s face into him. And Larry’s expression of not knowing what to do, every time, is priceless.

In fact, most of what makes this movie so great is a combination of Larry’s reactions and expressions with the crazy situations he’s thrown into. He is the everyman living in a bizarre world. Only instead of just sitting there, and letting the madness flood over him, (like John Cusack used to do in the eighties movies that launched his career,) Larry responds and gets angry and often shouts. He says what we’re all thinking and his frustration is absolutely hilarious.

Larry goes to meet with three different rabbis throughout the course of the film, and each one giving him different advice which really turns out to be no advice at all. The first rabbi is hung up on the parking lot with no clear reason for why. The second rabbi tells a fantastic story about an engravng in a patient’s teeth (brilliantly set to the music of Jimmy Hendrix,) and while it’s a fascinating story, in the end it means absolutely nothing at all. Larry gets pretty angry about this, yelling about the story that seemingly has no ending. And then the third rabbi, Marshach, won’t even see Larry at all. Marshach is the senior rabbi, the oldest and wisest of the bunch. His refusal is meant to show that nobody really has any life answers to give you and instead of pretending, like the first rabbi did, or telling half a story like the second rabbi did, Marshach won’t even sit down with Larry at all.

The movie works not only because of Larry’s reactions, which are brilliant and perfectly timed, but also because of the surrounding cast he interacts with. From the Korean student to Sy Abelman, the threats seem to be coming from everywhere. And the rabbis all have a lot of fun with Larry, without realizing that it’s at his expense. Larry even finds time to start up a steamy affair with the next door neighbor, and to consult with lawyers about his divorce. He has time to deal with the Columbia Record Company who don’t seem to understand that Larry never ordered their product, and to support his son who is being Bar Mitzvahed. This movie is loaded with Jewish heritage and ideals, and it looks for the humor in how ridiculous some of them are. For example, the biggest singing performance most boys give throughout their entire life is at their Bar Mitzvah, which comes at an age when their voice is at it’s creakiest. This movie has fun with those sorts of observations. It is a wonderful black comedy that channels Larry’s frustration in order to deliver on the laughs.