A Very Harold And Kumar Christmas **1/2 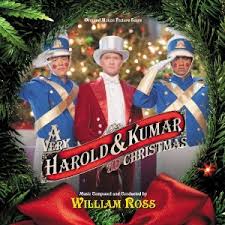 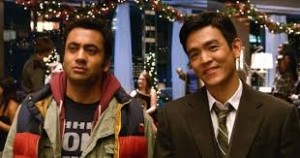 Not as good as the first, but certainly better than the second Harold and Kumar movie, this one has a lot of fun with Christmas and ends up being enjoyable.

Harold and Kumar 3 is a movie that shows us these two characters really do have a place in pop culture history. Their movies are so stupid, and yet so funny, that it’s pretty great. Where else could to unknown actors headline a trilogy and become more and more famous with each film. John Cho is now a major player in the J.J. Abrahams star trek films and Kal Penn just finished working for President Obama in the white house (there’s a joke about that in this movie, just like the way the expendables makes fun of Schwartznegger’s involvement with Politics).

The first of these movies, Harold and Kumar go to white castle, was great. What a simple premise that got turned into a hysterical road movie filled with crazy characters and situations. From the crazy hillbilly to the two girls who played battleship on the toilets, that movie was out of control. Stupid, yes. But funny nonetheless. And it’s unfortunate that neither of the two sequels could live up to it. But this third one comes kind of close.

The second movie was just stupid. It seems like it was made just to be made, without any real reason or storyline. The premise was that they got locked away in Guantanamo bay. That’s not a fun idea. But the third movie is all about Christmas, and everybody loves Christmas movies. Especially when it goes as far as to include Santa and his reindeer. The last movie that did that was Elf, and that turned out to be an incredible film, and what many now consider to be a modern day classic.

The storyline of Harold and Kumar 3, called a very Harold and Kumar Christmas, has the two of them start out separated. Apparently they haven’t spoken in years. Harold now has a beautiful girlfriend, and Kumar has a beard and seems to be a mess. At the start of the movie, he’s smoking weed with Santa Claus in a garage, which is kind of funny. Especially since Santa is played by the great Patton Oswald. Kumar finds out he got a girl pregnant and then receives a package for Harold and goes on a mission to deliver it to his old friend.

I’m not sure we needed the storyline about Kumar getting this girl pregnant, because the mystery package and visit to Harold’s was enough to set us on the right foot, but it seems that Kumar needs some kind of storyline here, and so we get this one involving a former flame. Harold certainly has the bigger storyline of the movie, with his girlfriend, Maria’s father (Danny Trejo) and extended family coming to stay with them.

The father is a real tough guy jerk, and he goes gives Harold a hard time in this movie over the lack of a real Christmas tree. Apparently this guy takes Christmas trees very seriously. He tells Harold a story about his mom getting killed over a tree and sees a flashback that has some very funny moments. First, there is Danny Trejo’s character, as a young boy, still having a long mustache. And then we see the Korean guys who attacked and killed Trejo’s mother and every one of them looks like Harold. They used Harold’s face for each one.

Harold ends up promising Maria’s family that we will decorate the tree before they return from an evening of church. But no sooner do they leave then Kumar shows up with the package for Harold. And when they open it up, they find a giant joint. Harold tries to throw it out the window, but it comes back in and lights the tree on fire. Now Harold and Kumar need to find another tree. That becomes the mission of the movie.

The film is filled with little adventures and challenges, that are sometimes funny, but more often kind of dumb. There is the black guy tree dealers who try to act tough, a beer Pong game at a party, a mob boss who has his men try to kill them, and a show with Neil Patrick Harris. It has been a staple of these movies that NPH, as he is referred to here, is in all three of them. In fact, when the first film came out, I don’t even think NPH was famous anymore. And then the TV show “How I Met Your Mother,” debuted and he has been a big star again, ever since.

While many of the jokes are dumb and don’t work, these characters are still fun to watch. We love the interactions between them, and the ridiculous ideas they come up. Harold and Kumar also have two friends traveling with them, only those two guys end up getting stuck in a closet somewhere while our boys go out and have their adventures.

I definitely enjoyed this movie for everything it had to offer. Christmas movies are always a blast, and this one was no exception, with its radio city-like music show and it’s subplot about Santa getting shot out of the sky. While the Danny Trejo stuff gets pretty tiresome at times, and definitely feels clichéd, most of the things with just our two boys work out fine. I love Kumar’s obsession with waffle bot, in such a way that he almost gives the robot life, the same way he did for the big bag of weed in the first movie. The story isn’t always great, and plenty of the jokes don’t work, but the movie is still fun and attempts to be creative wherever it can. It’s nothing special, but it is certainly an enjoyable film.