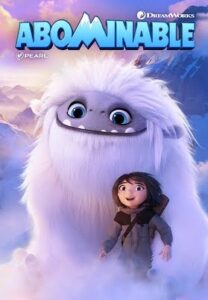 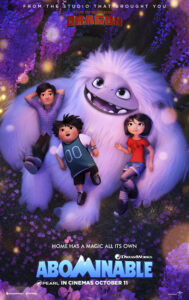 A pretty beautiful animated movie, this one might have a seemingly simple overall story, but it’s also got some great internal conflict that really comes out during the course of the film.

This is a movie about a teenage girl and two friends who travel across China in order to return a Yeti Abominable Snowman monster to his home in The Himalayas. On the surface, that story is very basic. And the movie follows a pretty straight forward structure of having these characters spend nearly the entire movie going from place to place while being chased down by a group of scientists that are hunting the Yeti. But there is actually much more going on here, when it comes to the characters. A whole bunch of characters get arcs, which means their storylines include character change and exist on multiple levels. It’s a movie that seamlessly works in one way for adults and a very different way for kids. There are definitely parts in the mid-section of the film that feel kind of repetitive, but the character development, especially towards the beginning and end of the movie, make this a very worthwhile and beautiful film

Abominable is a very well-made movie. It’s a funny thing, because on the surface what we have here is a very simple story about three teenagers trying to get a Yeti creature back to his home.  On another level, however, the movie goes much deeper and tackles the internal conflict that a girl is dealing with surrounding the death of her father. Kind of funny, how it can work so simply on one level and yet so deeply on another. The movie tells one of those human-teaming-up-with-a-creature stories, the way so many animated movies do, (Lilo and Stitch, Big Hero 6,  Rya and the Last Dragon, ) Only it’s not just about the two of them. Our protagonist, Yi, also teams up with two boys who are her neighbors and decide to help her. And those four characters spend the movie traveling through China and trying to avoid their pursuers.

Their mission is simply to get a Yeti, Abominable Snowman creature back to his home and family, on Mount Everest. And while that mission is pretty basic, and the story never really changes or spins into a new direction, there’s something to be said about simple stories. After all the Lord of the Rings featured one, and that was a whole trilogy packed full of lengthy movies, all about trying to get a ring from point A to point B. Another way to look at it is that Abominable is basically one long chase. That feels especially true when the characters keep running into and escaping their pursuers, the antagonists of the film, over and over again. But one has to remember that this is a kids movie, and there’s nothing wrong with a little Road Runner – Willey Coyote material from time to time. Plus, there’s all that underlying deep character material about repression, that will most likely go right over kids heads, but definitely helps add substance here for adults.

The deep material comes from Yi’s storyline. When we meet her for the very first time, it’s actually not Yi we meet first, but her mother and grandmother as they are talking about Yi. They are in the kitchen making food, discussing whether or not Yi is awake, and the next thing you know, Yi pops out of her bedroom fully dressed, wearing sunglasses, and ready to go. She makes a bee-line for the front door, turns down their offer for money, and is off. What an introduction. And now we watch a montage set to fast-paced music, as Yi does all sorts of unflattering jobs, each one for a cash only payout. These jobs include walking multiple dogs at once, babysitting a brat, and taking out loads of garbage for a fish restaurant. Why is Yi doing all this? Especially when she has family that is offering her money. Clearly there’s something going on beneath the surface.

Before we met Yi and witness this humor-filled montage, the movie actually begins with the Yeti escape. The creature busts out of a lab and uses some sort of special power ability to send electronic shock waves up to the flood lights and cause them to break. It’s the opening scene of the movie, and most of the sequence is shot from a point-of-view perspective, meaning the camera represents the Yeti’s eyes and turns to see what he would be seeing. This tells us, right off the bat, that the Yeti is the good guy, and not the humans who are after him. The quick sequence is great on all sorts of levels,  including using point of view to help us relate, getting things started off with excitement, introducing us to the antagonists, and setting the stage for the Yeti’s magical powers – special abilities. We even get to hear about a man named Mr. Burnish, who everybody seems to be afraid of, or hesitant to give bad news, in one way or another.

After watching the Yeti run through a street of crowded cars, and then into an alley, he sees a Mount Everest billboard all lit up. He climbs the scaffolding on the side of a building to get up close to the billboard, and then makes his way onto the roof. That’s when we cut to black. And this is where Yi’s introduction begins There’s that work montage, and then when she returns home from work, we meet the two neighbors who live in her apartment building. These are the boys who will be accompanying her throughout the movie. There’s Peng, the younger boy who is very much a child, filled with energy and excitement about playing basketball. Then there’s his older cousin, Jin, a teenager obsessed with his looks and material objects, such as his phone and his sneakers. Yi is far removed from each of these characters, in a world of her own. She’s clearly working towards a goal, even if we don’t know yet whet that goal is. In fact, Yi’s far removed and distant from everyone, including her mother and grandmother.

When she gets into her apartment, her mother asks her about playing the violin for them tonight, like she used to. Yi tells her mom that she can’t, because she sold the violin. Then she pretends to fall asleep, and after her mom comes to check on her, Yi gets out of bed and sneaks up to the roof. Turns out that violin she says she sold is still very much in her possession, and she plays it under the stars at night. Then she meets the Yeti. He’s asleep on the roof. When he wakes up, and a helicopter shows up in search of him, Yi helps hide the Yeti. She surrounds him with pieces of scrap metal so nobody will see him. And then the Yeti falls asleep once more. Yi stays on the roof. This is one part of the movie that really doesn’t seem to make sense. She just had this giant scare, and got lucky enough to get the Yeti to fall asleep again. And now she just sits down and stays there? How about running down to her apartment to get help?

The boys show up on the roof. The helicopters find them, and the chase begins. First it’s through the city streets. Yi’s goal is to get the Yeti onto a ship that is headed in the direction of the Himalayas. And she does this successfully, with the boys trailing right behind her. But as the ship is leaving the dock, abs Yi is looking at the Yeti (which she has now named Everest,) she realizes there’s just no way this creature is making it home without her. And so she runs down the docks, getting as blouse to the ship as she can, before jumping on board. Peng follows her. Then Jin, who is completely reluctant to be a part of any of this, says he is responsible for Peng, and so he takes off and jumps on board as well. Now the real mission has begun.

The mission takes this foursome to all sorts of locations. First they ride on a truck, while inside a box filled with cans of soda. They drink these and toss them on the side of road all the way until the box falls the truck. By doing this, they unknowingly give their enemies bread crumbs to use for finding them. Then there’s the giant grape scene, where Everest’s powers really start to get explored. And after that, there’s the side of the mountain scene where the group finds themselves under drone attack. This is where Everest turns a flower into something that resembles a flying balloon. After that, it’s the desert filled with turtles. Then the town with a stampede of yaks. All of this feels kind of similar. The best part of it all comes when Jin finds himself on his own and has to learn to survive in the wilderness. There’s a great montage that shows all this and includes multiple scenes of him running through the forest using the light on his phone as a flashlight, and screaming. Eventually Jin even trades his phone for a boat. And when his new sneakers get damaged, he’s okay with it, saying, “my babies are all grown up.” In these ways, Jin has a huge character arc.

But that’s nothing compared to Yi, who ends up learning that she’s got some special abilities of their own. Without giving any more away, the end sequences of the movie become really beautiful with glowing colors that resemble some of the best color work in Moana (perhaps the most beautiful Disney films in decades.) There are even twists and turns involving some of the characters who are hunting the Yeti down. Of that group, we’ve really got to main characters. Doctor Zara (Sarah Paulson,) and Mr. Burnish (Eddie Izzard.) She’s the scientist, and he’s the wealthy adventurer who first discovered the Yeti. These two have a sort of journey of their own, during the course of the movie, where new things come out about each one of them, and they experience some real character change. That’s pretty big. Especially for an animated movie. The main character always goes through an arc, but in the case of this movie, it’s some of the side characters, like Jin, and then some of the antagonists as well.

And all of this leads to a very climactic ending, including a showdown on and around an ice covered bridge. The movie definitely has some slower parts and some areas that seem like they are repeating material that the movie already covered. There are only so many times when we can watch our heroes come face to face with the pursuers, and then manage to escape them. Jin getting separated from the group and then having to go at it on his own for a little while adds a little extra flavor to the mix, but otherwise it’s business as usual for a solid portion of this movie. Still, the adventures these characters have a pretty fun, and the character arcs run pretty deep. The story of Yi, her violin, and her father is pretty heavy for a kid’s movie, and it helps elevate this film to a way more profound level than it otherwise would have reached. This is not a perfect film, but there is certainly a lot to like about it.