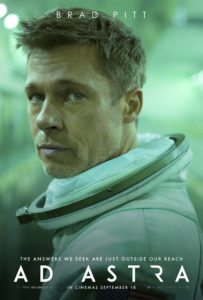 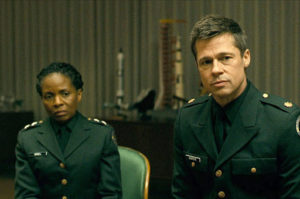 A solid and compelling first half really falls apart and becomes incredibly slow and boring in the second half.

Movies are supposed to get better as they go on. They are supposed to get more exciting and tense and to lead to a climax. Pressure is supposed to build. The stakes are supposed to get higher and higher. Ad Astra is a movie that doesn’t know that. Here is a movie that is built on a very cool premise that somehow goes in exactly wrong direction. This one starts big and ends small. It has a fairly simple story surrounded by some incredibly cool challenges and atmosphere. And yet, the movie ends up being just okay. How is that even possible? A movie about space travel in the future and voyaging from one planet to another to another still turns out to be just average. It’s all because of the final act, which just completely falls apart and leaves the audience both tired and bored.

Let’s start at the beginning. It’s way in the future. Space travel is more than possible. People actually live on other planets (mostly scientists who are there to do research.) One of these planet is the moon. Another one is Mars. Major Roy McBride (Brad Pitt,) is an officer at Space Command (SpaceCom.) It’s a good thing they call it SpaceCom throughout the movie, which makes it sound like a company, because Space Command makes it sound like Space Force (the Steve Carrell Netflix show,) which means it sounds pretty silly. And nothing about Ad Astra is silly. In fact, this is the most serious movie about space that you will see. Between the sad and slow music and the constant voice overs by Brad Pitt, this thing feels a whole lot of Tree of Life, from time to time, only a whole lot better. That movie was pure symbolism and slow as hell. At least with Ad Astra there is a story and a point.

And for most of the way through, that story is pretty good. McBride works on satellites and space stations that need to be repaired. There are a series of electrical surges that have been happening on the SpaceCom equipment, causing all kinds of shortages and malfunctions. One of these happens at the start of the film when McBride is working on a space station that literally reaches from down on the earth all the way up to space. The surge happens and McBride sees the explosion above him. Then he is struck by falling debris and goes plummeting down, off of the space station. Luckily he has a parachute (even though it is slightly ripped,) and he is able to survive. This is a very cool and exciting opening.

From there, McBride is brought in for a meeting. He is told by higher up officials at SpaceCom that the surges seem to be coming from a spaceship that they sent up seventeen years ago and that they lost communication with, called the Lima Project. They believe that spaceship is still out in space and is somehow causing the surges. And the commander of that spaceship was McBrides father, Clifford  (Tommy Lee Jones.) So they want McBride to go up to space in order to record a message that can reach his father. Then they can send the message to Clifford and see if he responds. That’s the gist of the movie, or the mission, anyway. It seems pretty simple. After all, why couldn’t he just record the message here on earth, and then the movie would be done? Because it would take away from all of the excitement, of course.

By excitement, what I mean is that first McBride has to get up to the moon, then he has to travel across the moon to get to the space station. Then from that space station, he has to take another spaceship to Mars, which is where he will record the message. And that’s just to complete the missions Spacecom is asking him to do. Without giving away spoilers, let’s just say he does even more traveling from planet to planet after that. So it sounds like this movie is about a lot of traveling between planets, right? Well, it is. And believe it or not, most of that is pretty cool. We haven’t really seen a movie like this before, that gets up close to the rings of Saturn, for example.

But before we get into the different missions and travels that McBride goes on, in more detail, let’s take a step back to examine the plot. So a spaceship that they sent up over a decade ago has disappeared, and now they want to send up another spaceship to retrieve it, (in this case it’s not to retrieve it, but to send a message, although let’s be honest, this movie is going to have to be about actually reaching that ship in person for us to really care.) This storyline should sound familiar. We’ve already seen a version of this story done twice before. There was Event Horizon, a movie that was more horror than sci-fi, where a team of astronauts went up after a spaceship that disappeared (and got trapped in a time vortex.) And then there was Sunshine, the Danny Boyle directed movie that was more sci-fi than horror, about a team of astronauts that went up after a ship that disappeared, where they lost contact with the captain and crew. Now, with Ad Astra, at least they are giving us some significant variations. The traveling from planet to planet is new, instead of just going from ship to ship. The storyline about his father is new. And the idea that this is a one man on a mission, instead of a crew on a mission is new. But otherwise, this definitely does feel familiar.

So now it’s time to get to the mission. McBride is partnered up with a space captain who used to work with his father, Pruitt (played by Donald Sutherland.) Fun fact, this is the second time that Sutherland and Tommy Lee Jones played astronauts together. The first time was in the movie Space Cowboys with Clint Eastwood and James Garner. But this is a very different kind of movie. Ad Astra is somber and serious. The futuristic sci-fi elements are the coolest thing about the movie. For example, these two guys, McBride and Pruitt, need to fly commercially to the moon (like an airplane, complete with flight attendants and on board service, only a rocket instead of a plane.) And then when they get to the moon, they have to board land rovers and travel across the surface of the moon.

In order to do this, McBride and Pruitt ride on these land rovers with a team that is hired to take them to their destination. And they are attacked, during the ride, by space pirates. It sounds way cooler than it is. Basically, they are attacked by other guys on land rovers. That being said, this is by far the best and most exciting scene in the movie. McBride has to use a space gun to shoot them. It’s pretty fantastic. And he and Pruitt arrive at the space station on the moon, where they will be launched to Mars. Only after the pirate attack, Pruitt is in bad shape and can’t go along. So McBride is going alone. But not before Pruitt tells him some crucial information about his father and what Spacecom plans to do.

Now comes the mission from the moon to Mars. McBride gets there, and records his message. And then he decides to travel to Neptune, where his father’s ship is supposed to be. This leads him to having a fight, of sorts, with the crew of another space ship, while on board. This is the second real action scene of the movie, (technically there is a third involving space apes, who attack for a brief moment.) By the end of this third encounter, McBride is left alone on the ship, and now comes the long and tiring travel towards the end of the movie. This is where the movie begins to lose its focus. It stops being interesting or entertaining, and starts to really slow down. Maybe it’s to show us his isolation and make us feel like he is feeling. The result is not much fun.

When McBride reaches his destination, things don’t get any better. The ending is so tiring and dull, that it ends up dragging the movie through the mud, which means everything that came before it is soured a little bit more. This is why an ending is so important. This is why it is so crucial that a movie builds up and gets more and more exciting. It also doesn’t help that the entire movie is characterized by this sad, somber music that is meant to make this all seem way too serious and poetic. And then there are Brad Pitt’s tiring voice overs, which also hurt more than they help. This is exact same story could have made for a much better movie if things had been handled differently. Give us a more exciting climax. Give us livelier music and less voice over. A story about a future where space travel is a reality for regular citizens is pretty awesome. Partnering that with an idea about an astronaut traveling from one planet to another, and all the obstacles he faces along the way is also pretty cool. But then to cloud it in seriousness and make it feel tiring for the point of making it seem poetic is a mistake. The premise was clever enough, but this movie should have been a lot more fun and lively than it actually was.