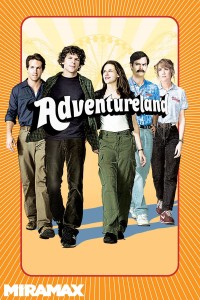 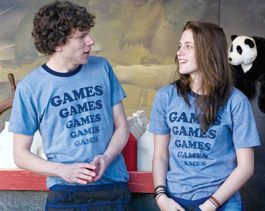 A very realistic and fun movie about a guy trying to find himself and figure out his life while working at an amusement park.

This is a smart and funny black comedy that is as much about the characters and situations as it is about the laughs. It is absolutely not a hilarious film by any means, and the comedy is actually more subdued and understated. But it’s there, mainly in the characters. Jessie Eisenber’s Brennan, as the awkward, loveable nice guy, and Martin Starr’s Joel, as the nihilistic, downer, in particular are fantastic characters who are good for a number of laughs. And then there’s the story, about a relationship that is troubled by secrets from the past, and the way that all of this is delicately handled at a nice slow pace, that allows things to develop and lets the audience actually care. All of this works out nicely, and despite an ending that is a little too serious and dramatic, nearly the entire movie is fantastic.

Adventureland is a fun and light hearted movie. It’s never a hilarious movie or anything like that, but as a comedy, it works, and as an interesting story, it kind of works even better. This is the story of a regular guy who spends the summer working at an amusement park, and starting to figure things out. If that sounds a little like another summer amusement park working movie, The Way Way Back, that’s because it is. The difference is in that movie, the hero (who was a good deal younger,) was taking on his family unit, and in this one, he’s taking on relationships. Both films are, however, black comedies, that work because of their intelligence, more than anything else.

Adventureland doesn’t even get to the amusement park and the different characters who work there until a decent amount into the film. Instead, it starts with multiple scenes that help the audience relate to the protagonist, James Brennan (Jessie Eisenberg.) First, he is at a graduation party, telling the girl he’s been seeing how much she means to him, only for her to dump him. Then he’s with his friends, talking about how he’s a virgin and he let her know it. And then, just to make things worse, we get a scene with Brennan’s parents, where they drop one bomb after another. First, they tell him they can’t afford to pay for his summer trip to Europe that he’s got all planned out. Then they say they can’t afford his tuition and housing for the fall, so he will have to get a job over the summer. And finally, they tell him they are moving back to his old town, where he lived as a child. All of this, at his graduation lunch. That’s the kind of black comedy tone this movie has going for it.

We see Brennan go to interviews and take multiple calls, trying to get a job. With each one of them, he explains that he has no experience in that industry, per say, but has other things that he has done which might qualify him. No luck. Eventually he finds himself turning up at Adventureland, the amusement park where he got sick when he was a child. The only kid Brennan still knows in this town, a boy named Frigo, works there. Frigo is a guy who seems on a mission to annoy the hell out of Brennan, from punching him in the balls, to shouting out Brennan’s embarrassing moments to the world. At one point, he even urinates on a window to get Brennan’s attention and make things awkward for Brennan and the girl he’s talking to.

Once at the park, Brennan interviews with Bill Hader and Kristin Wiig, two wonderful Saturday Night Live comedians who are playing a couple in this movie. The two of them are the managers of the park. Both actors are funny on their own, but together, they don’t get to do quite as much as they could have apart. Hader is the one who is given more to do, and he’s pretty funny. Wiig, on the other hand, is basically in Hader’s shadow the whole movie, only turning up in scenes where he is there, and backing him up. She is definitely capable of much more.

Brennan starts working in the games area of the park and is shown around by Joel, (Martin Star.) Here’s an actor who came from the Judd Apatow camp, always playing the downer, sort of nihilist character, and with the TV show Silicon Valley, he has finally made it big. In Adventureland, he’s playing the same kind of depressed character that he plays best, and when he teacher Brennan the rules of the park, we get a great scene. He explains how each of the games is rigged so that it is impossible for the customer to win. This includes hats that the customers are trying to knock off dummies which are actually glued on, and a basketball hoop that is in a shape where the ball won’t fit through.

All of that happens in the first half. It’s all setup and development. And then we get to the relationship business, but even that moves nice and slow, and this is a good thing. Brennan starts to hit it off with a girl named Emily, (called Em, played by Krisen Stewart,) and what’s great is that they have fun scenes together without any conflict. Their first real meeting happens when a customer gets angry about not getting a prize and nearly pulls out a giant knife. Em saves Brennan by giving the customer a giant panda.

We slowly start to see that Em is sleeping with an older guy who works at the park. This is Mike Connell, (Ryan Reynolds,) and he is married. He’s a sort of legend at the park, being the mechanic who is also a guitar player and once jammed with Lou Reed. The movie takes its time to develop the truth about Em’s relationship with Connell, first showing her drive to a bar after hanging out with Brennan, later showing her answer the phone and invite someone over, and then finally showing us that it is him. But things get even more interesting, once another legend comes across Brennan’s path, about a girl who Connell used to see behind his wife’s back last summer, taking her down to the basement of his mother’s house. That girl is Em, only Brennan doesn’t know it.

What’s nice is that the movie isn’t completely devoted to the Brennan and Em story. Instead, it is more this kid’s summer experience at the park and with the people who work there. So we get a subplot about Joel and the girl he made out with one night, and now wants to start dating. We also get some scenes of Brennan hitting it off with the hottest girl in the park, who everyone there is obsessed with. He ends up going out on a date with her. And all of this helps the story of Brennan and Em move along, with Brennan hearing rumors from that hot girl, Lisa P, and then telling her things that maybe he shouldn’t be.

Something else that’s pretty smart about this film is that it doesn’t villaify any character. O’Connell might be cheating on his wife, for example, but he’s not doing anything to hurt Brennan or Em, and in fact, he still acts like a friend to Brennan, despite being with the girl Brennan has his heart set on. He gives Brennan advice about things, like going out with Lisa P, and he doesn’t sell Brennan out to Em, to make his own position better. This goes a long way, considering that the usual move that a film would make here is to have the O’Connell character become the cliched villain, out for himself. This movie is too realistic for that.

The problem here is that so much of the movie does seem like what might really happen, including Brennan’s stories about why he has never had sex yet, despite having close calls, and then towards the end, that mentality kind of goes out the window. I suppose it starts when two different characters quit working at the park. Over dramatic much? And then some of the relationship problems become way too serious for this type of movie, where in reality, characters would just walk away from each other and say “oh well.” Here, these characters act like they have found the love of their life. It’s a little much. But aside from that final act, or so, the movie works pretty nicely. On top of everything else, including Eisenberg being incredibly likeable, and the comedy hitting just the right notes, this film has a killer 80s soundtrack. It’s just one more great thing to add to the list.