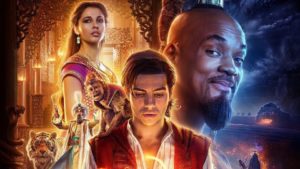 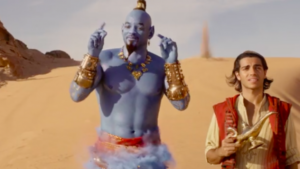 A light-hearted take on the animated film, this one finds its own ways to get creative every now and again, and overall does a pretty good job.

A well-deserved shake up of a movie, this one wants to be relevant and politically correct, and makes all the right moves to accomplish that goal. That means the cast is filled almost entirely with Arabic actors, and Princess Jasmine’s role is pumped up to be just as strong, powerful, and relevant as Aladdins. She literally has two new songs added here to show how in control she is. And while this is clearly made with an agenda, it still works. It works by giving us a different take on the story that is more god today’s time. It’s not a great movie, but it definitely is an interesting take on the original, animated film.

Having now seen three of Disney’s big four nineties animated movies brought to life as a live action film, I have to say, Aladdin is pretty good. The big four would be The Little Mermaid, Beauty and the Beast, Aladdin, and the Lion King. Disney also has Mulan coming out too, but something tells me they’ll stop after that, (I don’t see them doing a live action version of the Hunchback of Notre Dame.) The reason why it stops there is because 2D animation more or less stopped there, in favor of computer animation. The Lion King was followed up the very next year by Toy Story. The only reason Mulan and Hunchback came out was because Disney hadn’t bought Pixar (the company behind Toy Story,) just yet. So for two years, both studios were making movies at the same time. Then Disney bought Pixar and 2D animation was history.

And now Disney is making all their 2D animated movies into live action. Perhaps this trend started a few years back with Cinderella, Snow White and the Huntsman, and Maleficent (a take on Sleeping Beauty.) Both Snow White and Maleficent have already got sequels at this point. Will that be the next trend? A live action sequel to Beauty and the Beast? To Aladdin? To the Lion King? For now, Disney is still turning their original 2D films into live action, and we haven’t gotten the Little Mermaid or Mulan just yet (but they are both in production right now.) Of the ones we have gotten, (Beauty and the Beast, The Lion King, and Aladdin,) the Aladdin movie holds up.

A lot of credit should go to the casting decision of giving the genie role to Will Smith. Disney did the right thing with this one, casting Arabic actors in the leads (the studio certainly learned its lesson from casting Johnny Depp as a Native American in The Lone Ranger.) The actors playing Aladdin and Jasmine here are just what this movie needed. They are young and naive and innocent, just like the characters are. But it’s the genie role that needs to be flashy. And Will Smith is the guy to pull it off.

He’s no Robin Williams to be sure. He never had a chance at that. Williams was a unique artist and his role as the genie was one of his absolute masterpieces. But it was animated  and Williams was really just using his voice. With Smith, he’s doing the whole thing. And say what you want about Smith, (he is exceptionally terrible at picking roles… he turned down the Matrix and Django Unchained, was in a string of stinkers, and the one superhero movie he attached himself to was Suicide Squad, the first one and not its James Gunn- directed sequel,) but he still has talent. He just needs better representation or decision-making ability. And taking on the role of the genie was one of the best decisions he’s made in a long, long time. He definitely brings energy and humor to this film.

The movie opens with Aladdin singing the song Arabian Nights. This is different from the original animated film, where a street vendor sang it while wandering through the desert and talking to the audience. It was better in the original film, (that breaking the fourth wall idea was fantastic,) but it works here too. The song is used to sweep over a variety of settings and scenes that introduce us to the characters. This includes seeing Jasmine and her tiger, Raja, at the castle, and ends with Jafar sending a hapless victim into the cave of wonders. As the tiger mouth cave door slams down on the man inside, we realize that there’s been no explanation of what this tiger cave face is all about. Which means if you’re watching this movie as your first experience with Aladdin, and have never seen the animated film, you’re probably a little confused at this point. But that’s ok. You’ll find out what the cave is all about later, when it applies to our protagonist and he finds himself going into it as well.

After the song, we head to the market and meet Aladdin and his faithful monkey, Habu. They steal from the rich to feed the poor, (hungry children,) and when a bunch of guards chase them down, we get the song, “One Jump.” This is filmed pretty nicely with Aladdin jumping off walls and bouncing off canopy awnings. The action and excitement are there, and the only time it feels a little clunky is when Aladdin stops running and starts waking around while still singing. It’s clearly a song that’s meant to be sung while running, jumping, and swinging. Not waking. Overall, it’s well-done.

After this song, Aladdin meets Jasmine in the market and then gets brought to the cave by Jafar. It’s pretty much the same story as in the animated film. The real changes come in the ways of side characters in Jasmine’s father’s palace. There are two of them. Jasmine’s hand-maiden, (played by Saturday Night Live alumn Nasim Pedrod,) and the head of the palace guard security detail. These two are actually given brief subplots. In the case of the palace guard, Jasmine makes a personal plea to him (mostly via song,) to stand up for what he believes in, and defend the palace against Jafar. And in the case of the hand-maiden, she and the genie develop a sort of chemistry and flirtation that gradually  turns into a relationship.

Aside from those two new characters, the other major addition to the movie is in Jasmine’s songs. She has two of them, and neither one was in the original film. Here, Jasmine first sings about how she will not be jut ignored simply because she is a woman. Later on she sings about the problems in the palace and how those who are loyal to her father need to stand together and turn against Jafar. Clearly, this was all done in the wake of the Me Too and Time Out Movements, when the strong dog powerful woman is now more relevant than ever.

But it’s good. It’s interesting and different. This is the wake up call version of Aladdin. Even Disney had to make fun of itself, in the way it treats princesses, in Wreck It Ralph 2, joking about how the tamale heroine give the men the advice or push in the right detections and then the men get all the credit. Well, this version of Aladdin is out to make things right. That includes casting Arabic actors for all of the leads (except for the genie,) and it includes beefing up Jasmines role to be a character with just as much to do as Aladdin himself.

Sometimes with these Disney live action films, we just want to see the same movie that we are so familiar with and love, only done with real actors and no animation. We want the lines to be as close to the same as possible, and when there are slight changes, they feel kind of pointless. Like changing something just for the sake of changing something. Such was the case with the Lion King remake. The Aladdin remake (live action version,) is much better than what they did for the Lion King. Here the changes feel purposeful.  This is a whole new take on the story. A more relevant and appropriate take. The movie isn’t great, there’s no real “WOW!” factor here, but it is certainly pretty fun.