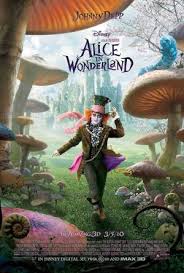 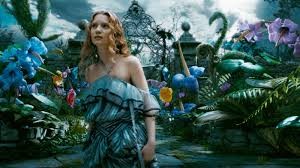 The story-line often lacks, but this visually creative movie has enough good humor and spectacle that one can easily keep entertained.

Alice and Wonderland, the Tim Burton version, is an interesting take on the classic Lewis Carrol story. For one thing, there is absolutely no other director who would have been better suited to make this movie than Burton. At least the old Burton. The man who gave us Edward Scissorhands and the Michael Keaton Batman movies. Burton used to be a master of Goth. His movies were hauntingly spooky just in their atmosphere. Even the animated ones, like a nightmare before Christmas. He had movies like Beetle juice and sleepy hollow under his belt, and the one thing you could always be certain of was that he would deliver with atmosphere. But in the last ten years or so he started to compromise that a little, making movies that were lighter and more mainstream than we were used to seeing from him. Movies like mars attacks, big fish, and Charlie and the chocolate factory. Then in 2007, he returned to form with Sweeney Todd. It was scary, bloody, gory, and more Burton-like than even some of his classics. Now, his follow up to that film is Alice and Wonderland, which is plenty dark, but lacking in a few significant other areas.

The movie starts Alice off in London as a child and we see her father, the dreamer, being rejected by his peers. He talks to Alice about white rabbits and dreams and not being afraid to let one’s imagination run wild, and then he has gone. We cut to Alice as a young woman and her father has since passed away. She now lives with her mother and is about to be proposed to by a disgusting, yet wealthy man named Hamish. Alice has no interest in this man, despite her knowing that society expects her to agree to marry him. Instead, she runs away from the scene, chasing after a white rabbit and falling down the rabbit hole.

It is a great opening, lasting about ten minutes and really transporting us into Alice’s life. We meet and spend some time with her mother, sister, aunt, and a number of other interesting characters including two girls who cannot keep a secret and her sister is cheating husband. A lot happens in those ten minutes. There is humor, like when Alice threatens the girls, madness, like when Alice speaks to her crazy aunt who claims to be waiting for her fiancé, and even a number of references to the people who want Alice to marry Hamish, as an evil upper class. These people are condescending to Alice and her family, act as if they are entitled to anything and everything they please, and have no respect for other people’s feelings. All of this is setup in just the first ten minutes.

Unfortunately, once Alice falls down that rabbit hole and into another world, all of that goes away. Maybe that story was so interesting simply because it was only ten minutes long and so disappeared before it had the chance to wear out it’s welcome, but still, it might have been nice to stay with it a little longer. Down in Wonderland, or Underland, as this movie calls it, Alice finds herself in a room trying to figure out how to squeeze through a tiny door. A potion makes her small and a cookie makes her big and she tries them both and finds her body transforming back and forth.

Once through the door, Alice meets Tweetle Dee and Tweetle Dum, two characters that Burton did a wonderful job bringing to life with both visual mastery and humor. These guys walk and talk funny and play off each other with great rhythm. In addition, they bring her to see a blue caterpillar. From there, she goes to see the Cheshire cat, and from there, she goes to see the mad hatter. The big problem, with the first half of the movie is that it really is just Alice going from place to place, meeting more and more characters. Burton must feel like he has a bunch of lovable iconic characters that the audience wants to see, and so he will bring Alice to them, one after another, in order to get them out of the way. It does not work. He treats introducing us to these characters like a choir, where it should flow into the story and help move the narrative along.

Once at the hatter’s the real storyline begins. The Hatter (played with strange silliness by Burton regular Johnny Depp) is kidnapped by the queen’s guards and brought to her palace as a prisoner. She has gotten word that Alice has returned (apparently Alice came to Wonderland before, when she was just a child), and she thinks the hatter might know something about it. She also kidnaps Tweetle Dee and Tweetle Dum.

So now, Alice must go to the palace and try to rescue the hatter. She makes it there, getting a ride from a dog, and then climbing over dead faces to get across the moat (Burton certainly tries to make this dark wherever he can), and interrupts the queen during her game of croquet. The queen takes Alice in because of her enormous size. It is a running gag of this movie that the queen (played by Burton’s wife Helena Bonham Carter) has a giant head and therefore likes to surround herself with other people who are somehow disproportionately disfigured. Her entourage is filled with people, who wear fake noses, chins, and even boobs, just to look like they have strange features.

Alice now spends far too much time in the queen’s castle and so does the hatter. The scenes here are not especially interesting (example: the hatter helps the queen try on different hats), or fun. And when we come out of it, Alice is riding off to see the white queen and tell her that she wants to help restore Wonderland to it’s former glory. In a quick flashback, we see that the white queen used to rule over the land in a time of peace and happiness. Then the red queen took over and made it the way it is today.

The story does start moving once Alice leaves the palace. Finally. She goes to see the white queen, the hatter is the star of a big ceremony in which he is to be executed, and everyone walks away from this preparing for battle. There will be a final confrontation in which both the white queen and the red queen will appoint champions to fight against each other. For the red queen, her appointment is a no brainer. She picks the jabberwocky, which is a giant dragon. The White Queen does not want to appoint anyone, but want it to be voluntary. And so Alice steps up and volunteers and we get a final, climactic fight.

The movie works on many artistic levels, but its storyline is lacking. The visuals and creativity here are without a doubt off the charts and the movie is worth seeing for those alone. Just look at the knights of each army and how they are either white chess pieces or red playing cards. Look at how they move and fight. Watch the red queen talk about her “fat boys” or threaten frogs for eating her treats. Not only is this movie artistic, but its characters are often very funny. However, the storyline is just too simple. Alice has to save the hatter, so goes off to the palace and then she has to represent the queen in a climactic fight. Not much to it. Thankfully, there are other plot lines going on as well, such as the idea that Alice might or might not have been here before as a young girl, or the one about her being proposed to by Hamish, back in her home life. There is a lot going on here, and not all of it works, but visually the movie is striking, and the humor helps keep it afloat.