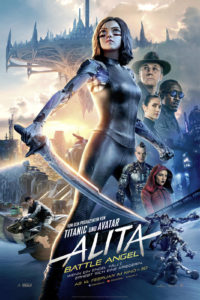 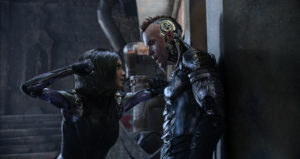 This is a pretty great action movie. Of course it’s all CG effects, (the main character is a robot, filmed with motion capture, after all,) but even still, this thing looks good. And with James Cameron (Avatar,) producing and writing the script, you better believe the ideas and world building are pretty cool too. The movie is fun. Some of the story feels either familiar, or not quite explored enough, but that’s what sequels are for, right? Hopefully. Until then, we have this movie to look at alone, and the villains are pretty weak. Especially Mahershala Ali and Jennifer Connelley, great actors whose characters just aren’t fleshed out enough. But in terms of action, ideas, and this new impressive world, the movie really delivers.

Alita: Battle Angel is a lively and exciting film that is creative as hell. At least in terms of the setting, designs, and characters. In terms of action, this one is great too. In terms of story, it’s just okay, and that’s where it leaves things to be desired. The movie is directed by Robert Rodriguez, (Desperado, Sin City,) and it is written by and produced by James Cameron, (Aliens, Terminator 2.) In the realm of sci-fi, you don’t get a better name than Cameron being attached. This guy has made some of the best sequels of all time, (sequels that have actually trumped the original films.) And he’s done it by delivering on the excitement and the action. Not to mention Avatar, the biggest box office fantasy / sci-fi movie of all time, and a pretty amazing film.

And Rodriguez, the director, is great too. He’s more down to earth than Cameron is, making all sorts of crazy Mexican criminal and vigilante movies like Desperado, Once Upon A Time In Mexico, From Dusk Till Dawn. These movies might be more grounded, but with Spy Kids and Sin City, Rodriguez started taking on computer effects and pushing the envelope of what could be done. He’s innovative and imaginative, and just needs that sci-fi angle, that Cameron is able to give him. And these are the reasons why he’s the perfect action director to combine forces with Cameron and see how far the envelope can be pushed.

Alita: Battle Angel is based on a Japanese Manga series. It’s about a world where robotic cyborgs are the bounty hunters, roaming the streets, looking for their targets. The city they all live in is floating directly under another city that is for the elite. Think Elysium, only more about the spectacle and notion of it all than the PC agenda and message. Let’s put it this way… we don’t actually see that city floating above everyone. All we see is the land mass hovering in the sky that the charters can look up at and wonder about. At most, characters try to climb up these giant pipe-like structures to get there, but don’t make it very far. What exactly that city looks like, and what it’s really all about, is being saved for the sequel, if there is one.

And that’s plenty fine, since this movie has more than enough that it wants to accomplish right here, in this setting that it’s in. The movie begins with Dr. Dyson Ido, (Christoph Waltz,) exploring a scrap yard, looking for parts. He comes across the head of a female robot and is shocked to find it so in tact. Dr. Dyson brings it back to his lab, right in the center of the city, and builds a body for it. Then he brings the robot to life, with the help of his assistant. This is Alita. She is a teenage girl robot who wants to rebel and explore. She wants to know what’s out there and to find answers to all of her questions. So far, everything that has happened seems pretty or routine or even cliched. How many movies have we seen open with a character finding something special in a junk yard? But we aren’t bored by the plot, simply because the effects are so state of the art. Instead, we are kind of mesmerized, taking in every little detail. Especially all the cool robots and characters who are part human part machine, (and plenty of them come in to be operated on by Dr. Dyson.

Alita start seeing ads and images on TV screens for a sport called Motor Ball (sounds a lot like Murder Ball, that movie about guys playing a sport in Wheel Chairs.) Motor Ball is played on a track with these giant robots chasing after a ball, and smashing each other around in the process. Alita also sees that the local teenagers play a version of the game in the streets. They play with rollerblades that are powered by hand held remotes. And so Alita joins in. There’s a boy named Hugo, who she has a connection with, (ever since he saved her from being run over a giant robot in the street.) Hugo brings her into the game, playing with his friends, and she turns out to be pretty good at it.

But she wants more. Especially after learning that Dr. Dyson is a hunter – warrior, or a bounty hunter complete with a card that validates him to have this job as a side gig. Alita wants to be a hunter – warrior too. Especially after she helps Dr. Dyson by taking out three robot creatures that come for him.The third of these is a giant who is practically all muscle. Alita battles them in the alley and wins. And now she’s interested in taking on more. She gets the taste, and doesn’t want to let it go so easily. Especially not after Hugo and his friends bring her to an old space craft and she finds an armored body inside. She brings the body home, hoping Dr. Dyson will give it to her and use it to replace her old body. Only he wants no part of this.

But Alita goes out looking for trouble, trying to prove herself, anyway. First she joins the hunter – warrior clan herself, and gets an official card and everything. Then she shows up at a bar for these bounty hunters, where her first run in is with Zapan, (Ed Skrein, the villain from Deadpool,) a guy who is practically all robot, save for his face. Skrein is one of the most fearsome hunters, and he carries a sword with him which is supposedly legendary. No matter. Alita takes him out as well as every other assassin in the bar, in a great bar brawl action scene. It ends with her underground, fighting against that huge robot from the alley scene earlier on, how has been supped up and improved.

The more Alita fights and wins, the more she gets the attention of some higher ups who run everything in this city. There’s Vector, (Mehershela Ali,) who oversees everything that goes on, including the Motor Ball games. And then there’s the woman who runs the show with him, Chiren, (Jennifer Connelly.) But there’s a twist. Chiren used to be married to Dr. Dyson. They had a daughter together who was killed. And now with Alita, Dr. Dyson is trying to replace his daughter. He literally gives Alita the body that he built for their daughter, who couldn’t move her legs and was confined to a wheel chair. Well, now Chiren and Dyson are no longer together and Chiren has sold out to a higher power. She and Vector have it out for Alita in particular, and when they find out that Alita will be trying out for the motor ball games, they stack the competition with hunters – warriors who won’t be there to play, but instead are there to kill Alita.

The Motor Ball game is great. It’s a fantastic action sequence, as is pretty much every action scene and sequence in this movie. But what’s also great is that the movie doesn’t end here. This isn’t even necessarily the climax, or at least not the last climax. The movie has Alita go on to come after Vector himself at the end, and that means making her way through a room full of giant tank-like robots by destroying them all. And even after all of this with Vector, there’s still more with her boyfriend, Hugo. I’d accuse this movie of not wanting to find an ending and being too long, but the longer this one goes the better. Each continuation of the story, here at the end, gives us more cool action scenes, so what is there to really complain about?

James Cameron might not have directed this movie, (he is too busy working on his Avatar sequels, that he’s been at it with for the last decade,) but he wrote it and his fingerprints are all over it. That’s a very good thing, since Cameron is one of the most imaginative filmmakers out there. When it comes to sci-fi these days, it’s Cameron and then it’s JJ Abrahms, and then maybe it’s Joss Whedon. But Cameron definitely holds the crown, and with this movie he gets to play in a somewhat similar sandbox to the one he played in with Avatar. We’re talking about a new world filled with cool creatures and technology, but we’re also talking about a story where a character gets to put on the skin and body of someone he or she is not. In Avatar, it was literally virtual reality, (think Total Recall,) with the characters actually lying down in a bed while their minds were transported into another body. Here, with Battle Alita, similarly it’s the character’s brain that is moved into a new body, and for Alita, that takes a little getting used to. It’s all goes fun, and the action scenes definitely deliver.