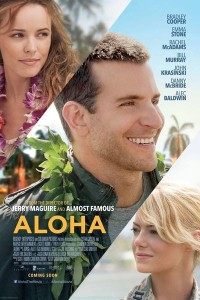 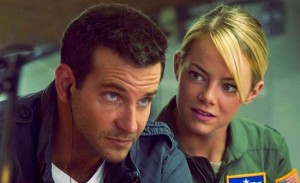 Gets a little better as it goes on, but really that just means this goes from a story with no plot to one with the usual cliched plot.

This movie is lousy in all kinds of ways. In the first half, there is no plot. We know who the characters are, but have no idea what they are doing or why. What is the mission? This movie isn’t interested in letting us know. It also doesn’t feature the romantic triangle that the posters and trailers pretend it does. There is only one romance here, not two. And then the second half of the movie does actually have a plot, and acts like it deserves a pat on the back for that. The problem is, it is an incredibly cliched and predictable plot, about weaponizing Hawaii. The movie manages to find a decent conclusion, and to get our interest back a little by its end, but just about everything else about this movie is handled poorly.

It’s a real shame that Aloha is a bad movie. After all, this is Cameron Crowe as the writer and director, the same guy who made Say Anything, Jerry McGuire, Almost Famous, and Vanilla Sky. Unfortunately in the past decade, Crowe has become more of the Elizabethtown and We Bought A Zoo guy. And Aloha just might be the worst of them all. But aside from the once mega-talented filmmaker losing his touch with this one, the movie also features a top of the line all-star cast. There’s Bradley Cooper and Emma Stone, front and center, but the two of them are surrounded with supporting actors who are all wonderful in their own right. From Rachel McAdams to Bill Murray and Danny McBride. This movie has even got Alec Baldwin in it. But none of that is enough to save the disaster of this story.

All of those words sound a little harsh, and when you think about where the movie ends up, in its second half, it isn’t completely terrible. But getting through that first half sure took a lot of work. This is the third mainstream movie in the past decade to be made about Hawaii, (following The Descendents and Forgetting Sarah Marshall,) and this movie does something that those other films didn’t. It really tries to capture Hawaii dead on, diving in deep to the culture, the dance, the song, the spirit energy, everything. That is not as interesting as it might sound, and here, it is really just a diversion for the lack of plot. Think about those other films for a moment. The Descendents had two plots working at once (the land and the wife plots,) and Sarah Marshall worked on all kinds of comedic levels. Aloha lacks in all of these areas.

The movie begins with Brian Gilcrest, (Cooper,) flying into Hawaii, on a plane that is being flown by Woody, (John Krasinski.) Both Gilcrest and Woody work for the military, only in very differedt ways. Woody is a pilot, whereas Gilcrest now works for a weapons manufacturer who is doing business with the military. This man is Carson Welch, (Bill Murray.) Also working for the military is Allison Ng, (Stone,) and Colonel Fingers, (McBride.) At the start of the movie, we see Gilcrest flying in and then getting off the plane, and we get a scene on the runway where every single character seems to get introduced, including family members, such as Tracy, (McAdams’) children. It gets ridiculously tiring. The camera movement in this scene is terrible, feeling like it was to be like a Bourne movie. And just like that, the movie has already started to lose us.

Part of the problem, as Gilcrest goes into a building to sit down with his boss Welch, is that we have no idea what exactly Gilcrest does. He works for Welch, but what does he do for him, and what is he doing here in Hawaii? I suppose that is completely intentional, to keep us guessing, and not tell us exactly what’s going on for a while, but it makes the audience feel like they don’t understand. What is this guy doing here, and what is his mission? Plenty of movies don’t establish the mission right away, and take their time getting to it, but the problem with doing that here is that clearly the character has come to Hawaii for a reason. And clearly it has to do with work. So by not telling us, its not so much that the movie hasn’t gotten to that part yet, as much as it is that the movie is hiding it from us.

Regarding that talented cast, the biggest problem here is that not a one of them is given the opportunity to do what they do best. Take Bill Murray and Danny McBride, for example. Two incredibly funny comedic actors. McBride knows what kind of roles he is great at, and tends to play them every chance he can get, be it on television (Eastbound and Down and then Vice Principals,) or the movies, (Pineapple Express, Tropic Thunder, This Is The End, Your Highness.) Here, in Aloha, he is playing the straight man. And Bill Murray is also completely wasted. Look at the scene where Gilcrest walks into the room and Welch starts massaging him. This should be funny. If Welch started making weird, moaning noises, it would be funny. If Gilcrest even looked at Welch like he was crazy, it would have been funny. But instead, Gilcrest just acts like he’s used to it and the two of them play it completely serious and straight. Perfect example of why this movie isn’t funny.

Allison is given the job of following Gilcrest around and basically being his assistant or escort with everywhere he goes while on the island. Her character is a high-strung, over-acheiver, and she starts out annoying, but then becomes kind of likeable during the course of the film. She also starts up a romance with Gilcrest. The trailers and posters make it seem like there’s a love triangle here between Allison, Tracy, and Gilcrest. There’s not. Tracy is Gilcrest’s ex-girlfriend, but other than that, the two of them have nothing going on. There’s not even a hint of any romance between them.

So, what exactly is the plot? The plot is that Gilcrest is there to broker a deal between the native Hawaiians and Carson Welch. Carson wants to buy the rights to use their resources and put things into the air above Hawaii. What he offers them is more land, which he owns. There is really just one scene of negotiating and discussing this. Gilcrest goes to visit the native Hawaiians on Welch’s behalf, and brokers the deal. Considering that this is his mission, you would expect to see the leader of the Hawaiians in more than one scene. Only you don’t.

Maybe that’s because this movie doesn’t really know what it is. At times it tries to be nostalgic, having Gilcrest and Tracy discuss the past and have a conversation about how much they used to love each other and why they broke up. It’s one of those conversations that feels very cliched and way too out of place, considering the setting. They are standing in the middle of Tracy’s kitchen, with her children right outside of the room. Considering that there is no romance here, between Gilcrest and Tracy, the movie needs to give Tracy something to do, and so it forces a relationship problem storyline into the film about her and her husband not communicating. Her husband barely says words, and often just walks up to people and stares at them. It’s really dumb.

At about the halfway point of the film, we learn that the military is trying to put satelites and maybe even weapons over Hawaii. At last, a plot is unveiled. It seems that Gilcrest and Welch are lying to the people of Hawaii, regarding what they are actually doing. Suddenly we do have a plot, but it is incredibly cliched. There’s the evil big corporation military, trying to hide their weapons, and then there are the innocent people who are being taken advantage of. I wonder which side Gilcrest will pick.

This movie has pretty much no plot in the first half and then a very cliched plot in the second half. It isn’t funny at all, and the one saving grace is that it occasionally has some nice touches. When Gilcrest takes a photograph out of a frame in Tracy’s apartment, because he knows he’s in the folded up part of it, we get a nice moment. But there aren’t a whole lot like that. Instead, we get mostly wasted opportunities. Luckily, as if by a miracle, the movie does manage to turn itself around a little bit by its end, giving us some nice resolution. At that point, it is definitely too little too late.