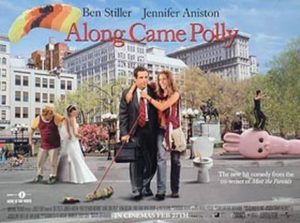 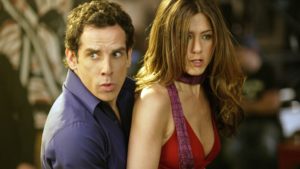 A very funny movie with a relatively simple plot, but some lively, creative, and hilarious characters.

This is a movie that might technically count as a romantic comedy, but sure goes for the funny ahead of everything else. It features friendships and side characters that are in here just to make us laugh. And they do. Phillip Seymour Hoffman, in particular, hasn’t been this funny since Boogie Nights. At the heart of the movie is this super cautious and paranoid guy named Reuben, who is a risk analysis and sees potential danger everywhere he goes. Then he gets dumped on his honeymoon, meets a girl who is all risk, and starts to second guess his lifestyle. It might be a traditional and straight forward plot, but the humor is there, around every turn, and isn’t afraid of holding back. This is Forgetting Sarah Marshal meets There’s Something About Mary, and it’s about at funny and willing to go for broke in order to get a laugh, as either of those films is.

Along Came Polly is a genuinely funny movie about an overly cautious, traditional guy who learns to live a little while falling for a girl. It’s a romantic comedy that almost doesn’t feel like one. This feels more like a Fareley Brothers movie, and almost like a Judd Apatow film. What those two references mean is that this is smarter and more willing to be out there and extreme than most romantic comedies. This is one that goes for the laughs first and worries about being offensive later. It’s a movie that tries to impress us with it’s humorous side characters, and actually does. Plus there’s a storyline that might be relatively simple, but still kind of works.

The story is that this Reuben Prefer, (Ben Stiller,) who is a risk analyst for an insurance company, gets married and then cheated on by his new wife, during their honeymoon. Now, he’s left alone with a house he just bought for the two of them to live in together, and must find a way to put the pieces of his life back together. In many ways, this movie is similar to Forgetting Sarah Marshal, another great romantic comedy, (and that one actually is an Apatow film.) Both movies are about guys who think they have it all, are crushed by being dumped at the start of the film, and then have to find a way to get it together despite being blindside and devastated by these events.

Here, the movie opens with Pfeffer getting married. It takes us through the entirety of the reception, from the best man, Sandy (Phillip Seymour Hoffman in an unforgettable role,) coming in and falling flat on the floor, to the toast by boss Stan Indursky, (Alec Baldwin, delivering in a tiny part, as an extreme character,) about not wearing Reuben out on the honeymoon with too much sex. We learn a lot from that reception, including the story of how Reuben and Lisa (Debra Messing,) met, with her showing him an apartment to rent. And before you know it, the two of them are on their honeymoon, on a tropical island, and that’s where the fun really begins.

Another movie this has similarities to is the Heartbreak Kid. Ben Stiller starred in the remake and that film also had the characters get married, go away to an island vacation honeymoon together, and then learn the truth about who the other one really was. Here, the Lisa character is more like the first act situation. She cheats on Reuben with a scuba diving instructor, named Claude, (Hank Azaria, giving the third funniest side character performance, after Hoffman and Baldwin.) There’s a great moment here where Reuben is about to drive off in anger, telling Lisa that she won’t be seeing him again, and then he drives backwards off the side of a hill, damaging the car. Now he has to ride on the back of the motorcycle of Claude, the guy who just stole his wife, while Clause rides shirtless and Reuben has to hold onto him. That shot, and the expression on Reuben’s face,  are  absolutely brilliant.

And then Reuben returns to New York, ready to move on with his life and put the pieces back together. Only everywhere he looks, people are reminding him of how terrible what happened to him was. His boss, Sandy, catches Reuben in the men’s room and doesn’t hold back about what he thought of Lisa, all while touching Reuben’s should and ear after urinating and not washing his hands afterwards. This is the kind of humor I mean, that you don’t generally find in romantic comedies. It’s almost like Superbad levels of comedy (although that movie of course took it to an extreme level, and it really paid off.) But here, the gross out humor is more funny than it is disgusting, which gives this an edge over most Farrelley Brothers movies, (Kingpin and There’s Something About Mary still edge this one out though.)

So, for example, we get scenes of Sandy dripping extra grease all over his pizza slice and then getting Reuben to play in a two on two basketball game where he has to guard a big, hairy guy who refuses to wear a shirt. The guy is sweating profusely and when he goes up for a shot, the man’s chest comes down right on Reuben’s face, covering his face in the man’s body sweat. It’s another perfect moment. Disgusting? Sure. But much more in the vein of being funny than being gross out kind of stuff. The same goes for Reuben and a bathroom scene that comes a little bit later, and at the worst possible time.

Reuben needs to meet a new girl after Lisa breaks his heart, and so he starts spending more time with Sandy, hoping it will help. Sandy gives him some terrible advice about spanking a girl when they are getting intimate, and he also brings Reuben to the art show party of a guy he used to buy weed from. It’s at that party that Reuben meets Polly Prince, the worst cocktail waitress in the world, (more than once she pours red wine into a glass of someone who already has white wine in it.) Reuben is deserted by Sandy at the party, after the two of them make a pact to stay together, and then he meets and hits it off with Polly. That’s when Sandy comes over and tells them they have to go, because he “sharted,” (okay, there is definite gross out humor here, but it’s still funny as hell.)

After a few awkward attempts at pursuit her (calling and then hanging up on her, pretending to randomly be in her neighborhood,) Reuben and Polly start dating. And she takes him to place after place of hot, spicy ethnic food. Reuben can’t handle this. He admits to having a terrible case of IBS (irritable bowel syndrome,) and he proves it that first night when he goes back to Polly’s apartment and has a hell of a hard time in the bathroom. Let’s just say it rivals Stiller’s bathroom scene with the little dog in There’s Something About Mary, (also at the new girlfriend’s apartment.) But Polly gets past the bathroom mess, and the two of them end up really liking each other.

The thing about Polly is, she’s not at all like anyone Reuben ever though he would date. She’s a rebel and a fly by the seat of her pants kind of person. As Reuben puts it, she’s on a “non-plan plan,” meaning she has no plan for life, and that’s very intentional on her part. Polly is so spontaneous and “go where the road takes her,” in attitude, that she can’t even commit to plans. At one point she calls Reuben to set a date for something, asks him about a date, and then tells him she’s not sure if she can do it that day. And Reuben, being the neurotic, paranoid, overly-cautious risk assessor, is the worst person to be dating her. Yet, she gets him to come out of his shell and learn to live.

\Of course we get the inevitable scenes, like Lisa coming back and wanting Reuben and her to get back together. But this movie handles them well, meaning it doesn’t give too much time to these things. Another one is the ending, where a fight leads to a breakup, leads to a climactic run through the streets. It would be nice if the end was as refreshing and original as movie was, but at least the humor still works, (there’s a great moment at the end with Reuben and a handful of street nuts.) The movie overall works because of the humor. It might not have the greatest plot, but it’s damn funny with some character actors really going all out. Hoffman in particular steals the show with every scene he is in. This one works because of how ridiculously funny it is.