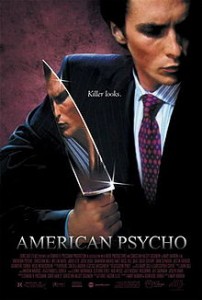 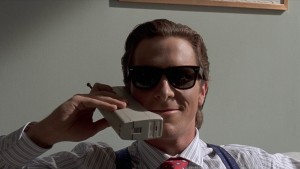 An unusual black comedy that is both disturbing and funny with it’s cleverly absurd antics.

American Psycho is a pretty wild movie. On the one hand, it’s a comedy about a guy who is absolutely obsessive about every detail of every material object he comes across. whether it’s the color of a business card or the type of lotion he uses on his face, this guy just gets so into it that it’s quite funny. and on the other hand, this same guy is a serial killer and is totally demented. it’s a very strange combination, but a genius move to make it equally disturbing and comedic.

the movie opens with patrick bateman (christian bale, in the role that brought him into the spotlight), sitting around at a restaurant talking with his friends. after that, we are with him in his apartment during his usual morning routines. his voice over explains all of the different things he’s doing and using, such as an ice pack over the eyes and a cleansing facial lotion that dries up and then peals off like a mask. the voice over talks about the reasons why bateman does and also does not use certain lotions, and it’s all so overly detailed, that it’s unusually funny. we never see stuff like this. i know it’s based on a brett easton ellis book and i know that all of this stuff has got to be in the book (i read his novel, the rules of attraction, and it was written with the same detailed voice), but this movie knows exactly how to handle it.

bale goes to work, where he and his friends sit around at a table discussing their business cards. it’s another very funny, material scene, where the guys just sit around caring about the most insignificant little details. one thing funny about the scene is that all of their business cards look pretty much the same. but the words they use to describe each one, as well as the way every time a new card is taken out, it is shown is slow motion, all works very well. the idea is that this stuff means a lot to bateman. so when he sees a new card being taken out, his heart almost skips a beat in anticipation. when one person’s card has a water mark on it, you can practically see bateman salivating while looking at it.

And then the killing starts. bateman kills a homeless man in an alley just because the man is uglying up our society, or something like that. he talks to the man about how bad he smells before knifing him to death. and then bateman wines and dines a colleague named paul allen, played by jared leto. bateman doesn’t like this guy very much, and that’s made clear from the start of the movie with things bateman says in his voice over about him. and now, after an evening of dinner and drinks, the boys return to bateman’s appartment.

that’s when the huey louis and the news music comes on and bateman pulls out his axe. he’s wearing a raincoat in a room covered in newspaper, and he’s clearly about to kill allen. but the great thing is, he can’t help himself from stopping to analyze the music. he talks about huey louis, this album, and also their albums that came before it. and then he lets loose and kills his victim.

We return to work with bateman where we spend some time with his timid secretary, played nicely by chloe seveigny. one of the funny things about the work scenes is that bateman never seems to actually be doing any work. he’s never on the phone with clients, or meeting with them, and when he does go to a meeting and sits at that long table, all he and his friends talk about is their business cards.

bateman has a visitor come to his office, and it’s the detective working the paul allen missing person’s case, played by willem dafoe. the detective has been hired by allen’s girlfriend who thinks something happened to him. but all signs point to him taking a trip to england. that’s because bateman covered his bases. he went to allen’s apartment, packed a suitcase full of clothes, and then recorded a new outgoing message on allen’s voicemail machine that told anyone who called that he would be in london for few days.

the investigation doesn’t really get to far, and that’s probably because bateman doesn’t seem to care that much. you see, this movie seems to be very much from bateman’s point of view. that’s why we never see him do any work. because the work doesn’t mean anything to him. i’m sure he does it, off screen, but probably does it mindlessly. what we watch is the stuff he thinks about and the stuff he cares about.

bateman has two different evenings with prostitutes, where he brings them over to his apartment, gives them his own made-up names, and has sex with them. even while doing them, he’s staring at himself in the mirror, making muscles and admiring his own physique. bateman is a control freak, and he tells the girls what to do. even at work, he tells his secretary what he wants her to wear. he loves himself and his opinions and on two other occasions, besides the paul allen murder scene, he plays loud music and analyzes it to his guests. one is phil collins, the other is whitney houston.

bateman finds himself constantly snapping and going on killing sprees. this happens more and more as the movie goes along. that’s because bateman starts to lose it. one thing that sets him off is when one of the girls he invites over starts to laugh at him for listening to whitney houston. he runs around naked with a chainsaw and it’s all ridiculously campy and funny. in another scene later on, he just shoots everybody he comes across. this is a very strange movie. it is set in the eighties, where sexual harassment ran wild in the work place, and people listened to ridiculous music while thinking they were ultra cool, just because they blasted it (bateman walks around with “Walking on sunshine” blasting in his head phones at the start of the film). the movie works as a very cool psychological study of this guy, but it also works as a great black comedy. it’s not the easiest on the stomach, but if you can handle that, then it’s definitely something different and a lot of fun.