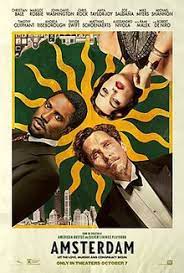 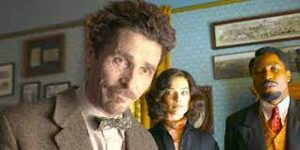 Like one of the darker, Coen Brothers movies, this one is a mystery set in a period piece time, with a plot that very much feels like we’ve seen it before, and like there’s not a whole lot new or special here.

There’s an okay story here with some funny moments, but ultimately the all star cast doesn’t make it anything special, or really add all that much. What we end up with is a familiar kind of mystery set in a period piece time, that calls beck movies of the Coen Brothers such as Oh brother Where Art Thou (without all the humor and fun that movie was having.) This one is mostly kind of somber as characters go from place to place trying to get answers and solve a murder mystery conspiracy.

Amsterdam is a David O. Russell movie, meant to  in many ways replicate what he had going for him with American Hustle, his last big hit. That movie was also a period piece loaded up with a giant ensemble cast, and a lively corruption in politics story. But that movie was about humor (black comedy humor,) as much as it was about anything else. It was fun. It was set in the seventies during a time of drugs and parties, and really delivered on its atmosphere. Amsterdam, on the other hand, is none of these things.

Its the far more serious, far less fun version of a corruption in politics story. Is there comedy in it? Sure, a little. It would be impossible to have a David O Russell film without that element. This is the guy who found a way to wring some comedy out of the Fighter, a movie about some of the most broken people imaginable. He did the same with Three Kings, a decade earlier, a movie about the devastation in Iraq during the first Gulf War. But with Amsterdam, he’s going period piece all the way, taking us as far back into history as he ever has, and also giving us the most serious movie he ever has. Maybe he should have tried just one new thing at a time, because the combination makes for a pretty average movie instead of a great one.

This movie is intentionally bleak, and at many times doesn’t even feel like a David O Russell film at all. Instead, it seems more like a Coen Brothers movie, and not one of the better ones either (probably on par with Inside Lewyn Davis, in terms of humor.) That is to say what humor there is feels less obvious, less mainstream, and way more subtle. Now, some will see that as a good thing, and will consider this O’Russell’s most mature film, the same way they consider Jackie Brown Tarantino’s best, because it is his most “mature.” What this word really means is less fun, more serious, and more boring. Now neither Amsterdam or Jackie Brown is boring, to be clear, but compared to the other films these directors have made, they sure seem that way.

Amsterdam is a period piece just like American Hustle was, only this one is set so far in the past (World War 1,) that it leads to a color scheme of browns and whites, in order to give it a really old look. The political aspect is another reason why this one feels like a Coen brothers movie. Like a more serious and less exciting version of Oh Brother Where Art Thou. In that movie, there was also a trio of friends going from place to place, trying to get what they were after (in that case money,) and uncovering hidden truths mostly by accident. In Amsterdam, we also have a trio of friends, going from meeting to meeting, trying to get what they are after, and uncovering truths. The only difference is here, it’s not so much by accident.

The trio of friends is composed of Burt Berendsen (Christian Bale,) Valerie Voze (Margot Robbie,) and Harold Woodman  (Jon David Washington.) They are on a mission to solve a murder where a young lady named Liz Meekins (played by Taylor Swift,) has brought them a case. Their father was their former Commanding Officer during the war, and now he has suddenly died of mysterious circumstances.. Meekins wants to know if there was foul play involved.

Now neither one of these guys she hires is a detective. Berendsen is a doctor, and Woodman is a lawyer. But given that they were both close to their Commanding Officer, they have a personal interest in the case. They go to a theater where the body is being held in an open wooden coffin,  hidden in a back room.  Woodman’s friend, Milton King (Chris Rock,) runs the theater and tells them they’re playing with fire, and that this whole thing they are doing is nuts. But they go ahead anyway, and bring the body to a morgue, where a mortician named Irma St Clair (played by Zoe Saldana,) does the autopsy.

It turns out the Officer was poisoned. And right as Berendsen and Woodman are breaking the news to Meekins, she is pushed in front of a moving car and murdered. The two of them are framed. And that’s when we flashback in time. We go back to World War I to see how these two friends met each other in a military regiment, and how they got injured in battle, which led them to a hospital where they met a friendly nurse named Valerie Voze. All three of them struck up a friendship, and after they got out of the hotpital, the three of them moved to Amsterdam together. Only Berendsen was still married back in America (his wife’s parents are the ones who sent him to war,) and so he had to get back home, to his wife.

The second half of the movie is better than the first. This is where the mystery starts coming together more and more, as our characters follow clues and try to put things together. In many ways it feels like they go from place to place meeting different unique characters and getting more answers with each visit. They meet a wealthy doctor and his wife at their mansion (played by Rami Malek and Anya Taylor Joy.) They meet two American spies (played by Michael Shannon and Mike Myers,) and they meet a Senator who was friends with the general, played by David O Russell favorite Robert DeNiro.

There are some things that work and quite a bunch that don’t. The political story about upper class families, influence, and corruption, is interesting, and definitely Carrie’s that  Oh Brother Where Art Thou feeling to it.  To add onto the connections between these movies,  there’s the period piece setting,  the brown- yellow palette of the atmosphere coloring, the paleness of actors, and even the use of a song that the characters made up and are suddenly forced to sing together on the spot, as their “hit,” that they are known for. There are a handful of funny moments, like when Senator Dilinbeck (De Niro,) makes them sing the song and they get it wrong at first, or when a cop asks Berendsen if  there is a pill gives you power, but for everything that works, there’s plenty here that doesn’t. It ends up being an okay movie, but certainly not one of O’Russel’s better ones.