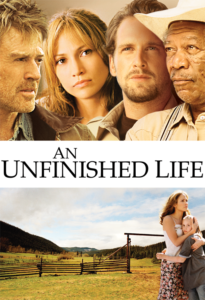 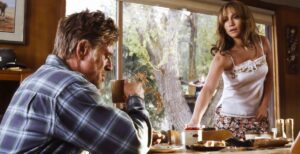 Somewhat cliched and predictable, but still an enjoyable film with a very likable cast.

An Unfinished Life is a movie by Lasse Halstrom, the director who made The Cider House Rules, Chocolat, and The Hundred-Foot Journey. He’s an artistic director who makes interesting movies with the right touch of humor combined with very human and sometimes evens emotional stories. This guy is good, but he is also like a poor-man’s Kenneth Lonnergan (the director of You Can Count on Me and Manchester By The Sea.) That is to say that Lonnergan makes movies that are more deep, emotional, and heart-tugging, whereas Halstrom makes movies that are a little more slow and artistic. But then there’s also the other major difference, which is that Halstrom’s movies are often about people from different cultures. His Hundred-Foot Journey explored the life of an Indian family opening a restaurant in Paris. His Chocolat dealt with a small French town. And his an Unfinished Life features characters of a mixed race family living in a world that often feels like the old west.

Specifically, we are talking about the character Jean, played by Jennifer Lopez. She comes to live with Einar (Robert Redford,) the father of the man who Jean was once married to. Only that man is dead and Einar blames Jean for her death. Not exactly an ideal person to have to go and live with. All of this starts with us meeting Jean as she sits up in bed, nursing a bruised cheek, while listening to a man profusely apologize for beating her. This man is Gary (Damian Lewis of Homeland and Billions,) and when Jean does not accept his apology, he becomes very angry with her. Gary is an abuser, and clearly this has happened before. It’s a pattern with him, and something that Jean has always felt like she deserves or needs to keep coming back to. Only not this time. This time she gets her daughter, Griff, of about ten years old, and takes off. The two of them go on the run, leaving Gary once and for all.

Only, as can be expected, things are not that easy. She can’t just make a clean break and never hear from this guy again. But she certainly tries. And this trying brings her to another state, to come and find her former father-in-law from back when she was married. When she shows up at Einar’s farm, he tells her point blank that he doesn’t want her there. But then she introduces him to Griff, and tells him that Griff is his too. That’s a weird way of saying that Griff is his granddaughter, but we get it. And Einar gets it too. Enough to let them actually stay with him. Jean tells him that she was pregnant with Griff at the funeral of his son, Griffin.

And so Jean and Griff stay at the farm with Einar. Jean gets a job working as a waitress in the local town. And Einar spends his days taking care of an injured friend, Mitch (Morgan Freeman.) Mitch is mostly confined to a bed after being mauled by a bear. He was Einar’s former ranch hand, and now Mitch tries to find out information about the bear, as if he and the bear’s souls are tied together. The bear comes into town, and Einar goes after it, supposedly wanting to kill it on behalf of his injured friend. But instead, the authorities capture the bear and bring him to a zoo. And Einar goes to visit the bear and report about his state to Mitch. This plot is meant to be poetic, but it just comes off as strange.

The main story, however, is about Einar and Jean. For Einar, he learns to be happy again by spending time with Griffin and teaching her how to do things around the farm. For Jean, her storyline involves her trying to find a normal life in the town. And that is not made especially easy by Gary, who tracks her here and doesn’t exactly want to leave. So there are essentially three stories at play here, and none of them is especially strong. There’s the story of Jean and Gary, there’s the story of Einar and Griff, and there’s the story of Mitch and the bear.

Regarding Einar’s story, he’s one of those long lost cowboy types who has no place in modern society. We see his tough guy moralistic persona come through early on when two drunk cowboys are harassing a waitress at the diner. They tie her up with a lasso, and Einar comes over telling them that he’s their new waiter, before giving them a beat down. It’s one of those scenes that doesn’t really have anything to do with any of the three storylines, but just adds a little bit about character. But that’a a problem. There are three stories. Everything that happens should somehow be related to at least one of them.

The other problem is that these three stories are all very thin. Take Mitch’s bear story for example. The point of it is obviously that Mitch feels a sort of kinship with this bear, or that Mitch basically is the bear. But why? The bear attacked him and put him in this miserable state that he’s in. You would think he would want the bear dead,. That’s really the only thing that would make sense. Some sort of vengeance. Early on, Einar goes out to see the bear with some fish, to see if the bear will eat it. The fish idea is part of a bigger plan, and unfortunately that plan has nothing to do with vengeance. He’s not trying to poison the bear. That would just make too much sense. Instead, he’s planning to free the bear.

That’s right. Einar, Mitch, and Griff all work to set the bear and release him into the wild Think about how dangerous that is. This is a bear who wandered over to Einar’s farm and nearly killed Mitch. Imagine if the bear did that to a child. Imagine if something like that happened and Mitch and Einar were the ones responsible because they freed  the bear. The kinship and being one with the bear storyline just doesn’t work. And when Einar brings Griff along at night and gets her to help him free the bear, it’s even worse. He’s actually putting her in danger in oder to free this thing. In this moment, two of the stories overlap, the one fo the bear and the one of Einar and Griff, but since neither story is all that good, it has very little impact.

What is by far the best story here is the one that involves Gary. And it’s not that this story is anything special. We’ve seen the abusive husband who shows up back in town story again and again. Sleeping With the Enemy comes to mind as a classic example, but there are a whole bunch. And yet, this is still the most exciting and eventful story in the film. Gary shows up in the town and Einar catches it right away. He reports it to the local authority, played by Josh Lucas, and then Einar goes and pays Gary a visit himself, threatening the man at gunpoint and ordering him to leave town.

And then of course Gary shows up again at the end for the climax. Every story needs a villain, even if it’s just a generic one that makes the path of the movie pretty predictable. But what’s especially strange is that nobody tells Jean that Gary is in town. Jean went out of her way to find the sheriff and show him the report she filed against Gary, just to make him aware of the situation. And the sheriff finds out that Gary is in town and doesn’t warn her. Instead, he just helps Einar threaten Gary and keeps an eye on him. Maybe somebody should say something to Jean. But this movie isn’t smart enough for that. It ignores logic and tries to be poetic instead. Let’s be so manly that we don’t even need to tell the woman about this guy, but just handle him ourselves. Let’s not kill the bear, but let’s free the bear instead. None of it makes sense. The movie is okay due to it’s likable cast of talented stars, but as far as story goes, this one is pretty bad.