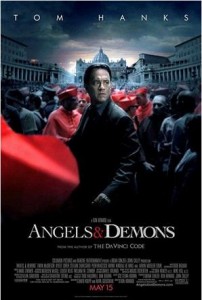 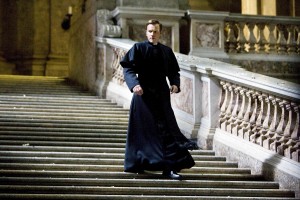 Fast paced and exciting, this is a hell of a mystery that takes us all over rome looking for clues.

The movie is basically one long and elaborate chase. set in rome, visiting many historical sites in order to really explore the city, the whole thing is incredibly impressive. on top of that, there’s a pretty cool mystery at hand here with clues along the way and twists that you just don’t see coming. robert langdon, the symbologist character from the da vinci code is a lot of fun to watch. especially with tom hanks embodying him, solving the pieces of the most intricate puzzles right before our eyes. some elements feel forced, such as the use of both a kidnapping plot and a bomb storyline running at the same time, but the way they all come together in the second half of the film makes it feel worthwhile. this movie has so much momentum, that we never get tired of the chase and feel like we are right in it until the end.

Angels And Demons is a very fun movie. it’s the sequel to the da vinci code (although in the books, this is the prequel, but the for the purposes of the film world things have been switched around.) that means the main character is again robert langdon, a symbologist professor at harvard university, played by tom hanks. it also means that the movie doesn’t take place at harvard at all, but instead at some european city with ancient history and an elaborate mystery for langdon to solve. last time the city was paris. this time, it’s rome.

part of what makes Angels And Demons so great is its use of some of the most amazing roman sights. for everything that’s in this movie, i’m surprised they left out the coliseum, the spanish steps, and the trevi fountain. i guess this movie didn’t want to just be a tourism guide of iconic structures. but what the film has in place of those is enough to make up for the monuments that are missing.

our main character visits the pantheon, the vatican, the four rivers fountain in piazza navona, castle st angelo, and piazza di poppola. these are some pretty significant places, for anyone who has been to rome, and by choosing these spots, instead of other more well-known ones, this movie isn’t pandering to a mass audience. if it was, you better believe the coliseum would be in there. but instead, places like piazza di poppola and piazza navona are featured, and it’s a pretty smart way of doing things.

these are the places that legitimately fit into the story. there’s no question that the trevi fountain is more impressive than the four rivers fountain, but the movie isn’t interested in showing off. it’s interested in telling a great story, and whichever monuments fit into that withouth making any changes to accompany them, so be it. by doing things that way, the movie is freed up to tell an interesting story of deception and intrique, without ever being forced by a desier to be at a certain place.

unlike the da vinci code, where the main crime on screen was a murder, in this film, it’s a kidnapping. the pope has died about a week ago, and now it is time for the cardnials to meet inside the sistine chapel at st. peters square, and to elect another pope. there’s only one problem. the four preferiti (the four men most likely to be picked), have all been kidnapped. whoever has them is making threats to the vatican, saying that he will kill one of the preferiti each hour.

that brings in robert langden to solve the elaborate trail of clues that this kidnapper has left for him. langdon is hired by vatican city to help them out, only there are a few problems that go along with that. one is that langdon has been trying to get into the vatican archives for some time now to do research for writing his new book. he is finally given the access now that he has always wanted, only it’s not to do what he needs to do in there. on top of that, knowing that he has been asking to get access for a while makes everyone who works for the vatican that much more suspicious of him.

vatican city has it’s own structure of authority, causing all sorts of chaotic messes. there are the police and detectives who are there, invesigating the kidnapping, but there are also the swiss guards who run vatican city on a daily basis and are in charge of guardina the pope. vatican city is considered it’s own country, and so the italian police have now jurisdiction there. this causes a great deal of tension between the man in charge of the swiss guard (stellan skarsgard), and the characters he comes into contact with.

to make matters worse, aside from the kidnapped cardinals and the threat to kill one of them every hour, there is also the small matter of a bomb. this bomb consists of a new particle that was invented in sweden at the start of the movie, in cern laboratories, and is known as antimatter. despite a demonstration at the beginning, i’m still unclear of what antimatter is exactl, or what it has to do with the creation. but what is made very obvious is that with science taking credit for the creation of the world, those who believe in religion ahead of science are about to get very angry.

as a result of all this, langden was run around all over rome trying to solve the clues and find the cardinals before they are all killed and also before the antimatter explodes. the movie ends up becoming one long chase through the streets of rome, with lots of little interruptions to find and decipher more clues. the music here is top notch (by hans zimmer, the guy who wrote the score for the dark knight). it helps keep us on the edge of our seat. and director ron howard is smart enough to know that we need stops in between the action to slow down and make sense of the next clue, before continuing to run along.

Angels And Demons does have more than a few moments where robert langden gets lucky or puts all his eggs in one basket and things happen to work out. there’s no question that this is no a realistic movie, but for what it is, things are handled really well. every scene looks amazing, and the story and music, as well as the break-neck pace keep pushing you along. this might be the most elaborate chase movie ever put on film. that’s because it really does feel like the whole movie is one long chase. unlike most films where the character is after one goal, in this movie, when langden finds one of the cardinals it’s time for another clue and a search for the next one. it’s a testament to howard as a director that things never feel repetitive here. chalk that up to his ways of putting in mcguffin scenes, which are not plot related, at just the right moments when we need a break. the scene when langden is searching through the archives when the air supply is cut off, for example, works especially well since it is a diversion from the mystery he is trying to solve. this is a very exciting and fun movie.