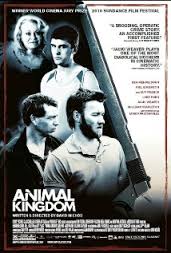 A very average movie in the first half takes a turn into unpredictable and wild territory in the second half, driving into being something special.

Animal Kingdom is the unusual kind of movie that really picks up steam as it goes on. This movie has a second half that is on an entirely different playing field as its first half. In most cases it’s the opposite. A movie will have a great initial premise and will start out exciting, fresh out of the gate. But then, as it goes on, the premise will wear thin, and the movie won’t be able to maintain the momentum it started with. Animal Kingdom has the exact opposite situation going on. It’s a movie that rewards patience. The first half is very routine and even somewhat dull. As it happens, the movie has a plan. It’s holding onto a lot that it lets loose in the second half. That’s where the movie becomes something pretty special.

This movie is about a young man (twenties), who goes to live with his grandmother and uncles after the passing of his mom. The uncles happen to be on the most wanted list for drug dealing and murder. At the start of the movie, we are with the boy, J, as he sits with his mom on the couch, while she overdoses on heroin. His voice over explains what is going on to us, and how this leads him to go off and live with his uncles. Once there, we meet a strange bunch of characters, starting with his grandmother (Jackie Weaver) who kisses all the boys on the mouths.

At the grandmother’s house, there are three different uncles who live with her. One of these is Barry (Joel Edgerton), the uncle who goes out of his way to relate to J and give the boy guidance, the most. Then there’s Darren, the uncle who is really just a few years older than J. For that reason, Barry hates it when J calls him uncle.  There’s also a third uncle, Craig, who has a thick beard, and seems to be the most emotional of the bunch. This family is close and they go out to different places together and socialize as if nothing is wrong. But the truth is, they are all very aware that the police are watching them and every move they make. At one point Barry walks up to the police car that is sitting outside of their house, and brings the police flowers.

There’s also a fourth uncle, who for a long while we only hear about. This man is named Pope (Ben Mendelson from the Netflix series Bloodline.) Hearing stories about him without actually meeting him helps build up the character’s legacy. At one point Barry goes to meet a man who works with the family, but also works on the police force. This man tells him that the family really needs to keep their heads tucked in, and that if they can lay low for just a little longer, the whole investigation will blow over. This man advises Barry to relay that message to Pope.

The big problem with all of this is that it seems like there has been a big event which led up to this, and we are missing it. Like maybe there was a robbery or a police bust and tip they received, or someone of prominence who overdosed on their drugs. Something to start this investigation. Only none of that is ever revealed. In a sense it’s like Reservoir Dogs, never really showing us the robbery, but only the aftermath. The difference is, in that movie we knew there was a robbery. In this one, we are never told what event put the cops on their trail. We are probably meant to assume that the cops have been closing in for a while, and that this investigation has been ongoing, but still, one conversation that revealed some of this would have gone a long way. I’m reminded of The Wire, season 1, with Stringer Bell and Avon Barksdale discussing when the heat from the police suddenly began and tracing it all back to a single event. Here, in Animal Kingdom, it’s one thing to leave that event out (for budgetary reasons,) but it’s a whole other one to never even tell us what the event is.

When the Cody family (the grandmother and all of her sons,) goes over to an apartment for the night, Pope steps out of the shadows and reveals that this is where he’s been hiding. Pope asks J if the boy knows who he is, and J tells him that he does. Then Pope goes to meet Barry at a market. This is where Barry gives Pope the message about laying low, and even tries to talk his older brother into pursuing other avenues of business. They discuss the stock market and how it might be a good move for their family to make. The two of them part ways in the parking lot, and Barry gets into his car only to have a bunch of police run up to his window. Barry thinks they are there with questions about where Pope is, but as it happens, they have another goal all together. They pull out a gun and shoot him, right there, in his car.

At this point, Pope stops hiding and goes to stay at the grandmother’s house with the rest of the family. This is also where the movie starts getting good. Just like on Bloodline, Mendleson is a hell of an actor and a force to be recokoned with. In this movie (like on that show,) he is the energy and life of the film. Once Barry is killed, Pope immediately gets to work on enacting vengeance. Craig has left the family and gone into hiding on his own, and so all that’s left at the house is Pope, J, and Darren. Pope starts working on Darren quickly, trying to convince him that they need to take action fast.  He tells Darren that if the roles were reversed and Darren was the one who had been murdered, he and Barry wopuldn’t even be having this conversation, because Barry would have already done something about it.

Darren gets J to steal a car, and then Darren and Pope use this stolen car to setup a scene where a bunch of cops will come and recover it. Once they arrive on the scene, Pope and Darren come out from the shadows and execute all of these cops. Right after this happens, we meet Detective Leckie (Guy Pearce,) who brings J in for questioning. He wants to know about the night those cops were murdered and what J remembers. J insists he wad at home asleep on the couch. Only Leckie isn’t really trying to find out about J. He is more interested in the uncles and whether they were at the house or not. J tells him he remembers waking up at one point and the uncles were there, but he really doesn’t remember many details, because he was either sleeping or else half-asleep the entire time.

J has a girlfriend who he’s been seeing, and when the heat gets turned up on him and his family, J asks the girls’ family if he can stay with them. They agree. Meanwhile, we catch up with Craig, who is staying with some friends on a farm out in the country. Craig finds a wire planted in the house of the friend, and when he confronts the people he is staying with, they insist that they know nothing about it. Craig goes running out into the field, armed with a gun, and that’s when a bunch of police cars show up. We later find out that the reason why they moved in at this time is because Craig found the wire and they felt like their investigation was compromised. Cragi opens fire on the cops, and they shoot him down and kill him.

From here, Pope decides to take matters into his own hands. He knows that J has been talking to the police, and can’t be sure of what the boy has been saying. Pope also gets a tip that J’s girlfriend has been talking to the police, and when the moment presents itself, Pope strikes on his family members. This is all very Goodfellas, where you don’t know who you can trust. It reminds me of the scene where Deniro, in that movie, tried to send Loraine Bracco into a store to get clothing, where if she had gone in, she would have never come out. In Animal Kingdom, the movie takes a very unusual turn for its final act, first having J go into witness protection (the Goodfellas ending,) but then taking it up a notch, showing that witness protection wasn’t going to be enough, after all. The final act is wonderful because of how unpredictable it is. This is a really intense movie that unfortunately only gets things started in its second half. Ben Mendleson deserves a lot of credit for that, being the menacing presense on the screen, but it is also Guy Pearce (the biggest name actor in the film,) who shows up in the second half. It’s as if the movie was holding onto these actors, saving them as part of a plan. It works. Despite the somewhat slow first half, the movie really comes alive as it goes on, and turns into something both thrilling and unpredictable.