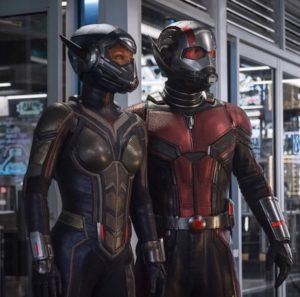 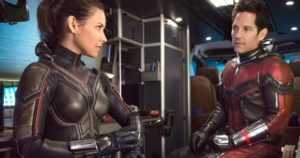 It’s a fine movie, and there are plenty of laughs, but Marvel movies have raised the bar so high that this one feels kind of insignificant, and a little too light-hearted in comparison.

This is a funny and entertaining movie that just has a little too much going on. Maybe that’s the problem (after all, the movie features four different storylines,) or maybe that none of it feels very significant after the events of Avengers: Infinity War, the movie that this film had the unfortunate luck of following. As a sequel to Ant Man, this movie is fine. It does develop the story further and it does connect nicely to Captain America Civil War, (the last time we saw the Ant Man character on screen.) The stories are for the most part pretty good, but mashed together it feels like a little much. We’ve got the super villain and the regular guy criminal villain, the house arrest agents and the quantum realm mission to find and rescue the mother / wife of the people who gave Ant Man his technology in the first place. The movie has some pretty good humor, (although not as good as the first Ant Man movie,) and has some fun with sizes, but something definitely feels like its holding this one back from being anything great.

Ant Man and the Wasp is a fine movie. It’s funny in all the right places, and the story isn’t bad. For one thing, it’s smart enough to give us multiple storylines and potential villains. But the problem is that something feels missing in the bigger picture, grand scheme of things. This would be a perfect sequel had not Marvel movies spun out in all sorts of other wide, and enormous directions over the past few years. Take this year a lone. We went to Wakanda in Black Panther, a fictional country that involved world building and technology the blew our minds. And then we got Avengers: Infinity War, which gave us a massive quest for these infinity stones with fatal and gigantic consequences. On top of that, Avengers Infinity War left things open-ended, meaning the movie left us in limbo, wanting desperately to know more, or for the story to continue. and Ant Man and the Wasp most certainly does not continue the story at all.  It doesn’t give us any answers or even clues of what’s to come next with all that. This wants to be a self-contained movie, and it is, but the thing is, storytelling is supposed to move forward. Especially when the audience’s appetite is at it’s hungriest. And this movie is in many ways a step back.

To be fair, when compared to the first Ant Man film, this movie does feel like it fits right in. It does advance that story, about the quantum realm and Janet Van Dyne, the mother of Hope (Evangeline Lily,) and wife of Hank (Michael Douglas,) who got lost in this other dimension and was supposedly killed. The first movie was about the technology and the competition. It was about establishing Ant Man and getting this common thief, Scott Lang, (Paul Rudd,) to take on the role. It was a great movie in the sense that it was funny, fast moving, and provided an entertaining villain. The second movie doesn’t quite measure up. Like most sequels, it believes that bigger is better, and so it definitely gives us more than the first one did. Only too much is not always a good thing, and that’s kind of the problem here.

Like Iron Man 2, (another blunder, especially when compared to the first Iron Man movie,) this one gives us two villains, and one too many storylines. Because it’s a Marvel superhero movie, one of the villains has to look like a creature, whether it’s a monster of sorts, (Abomination, to go way back to the early days of Marvel,) or a techno-suit powered up competitor, (such as Iron Monger, Whiplash, or even Yellow Jacket from the first Ant Man movie.) And having a villain who looks like this is a good thing. It taps into the fantasy element of these kinds of movies. But the problem is that this movie doesn’t want it’s creature / costumed villain to be pure evil. In the wake of Black Panther and Infinity War, the new trend over at Marvel is for villains to have an understandable motivation, and that means that this character can’t actually be bad. She instead, is in a bad situation, where she feels that she has no choice but to do the things that she is doing. Sometimes it’s nice to just let loose and have fun with crazy carnage, mayhem, and pure evil. This movie doesn’t feel the same way.

The villain we are speaking about is Ghost, a character who wears an all white, three-eyed suit that kind of makes her look like a monster. It might have been nice to find out why she has three eyes at one point, and what exacttly each one does. But this movie has too many storylines to juggle to find the time to get into detail on any particular one of them. Under the mask, Ghost is actually a woman.  She’s confused and unbalanced, and we can tell all this from the trailer. That’s a mistake. A trailer should never give away too much, and with one expression on her face, and one quick shot, this trailer does. But it’s a while before we get to Ghost, and before her, we come to the situation that brings Scott Lang back in, in the first place.

When the movie starts, Lang is living at home, spending time with his daughter, Cassie, who comes to visit as often as she can. Her parents, (Scott’s ex-wife and her boyfriend, played by Judy Greer and Bobby Cannavale,) love Scott. It’s such a nice contrast to the usual situation where the ex-wife and new boyfriend hate the fun, single dad. Only there’s one problem. Scott is under house arrest. This is a nice continuation from the Captain America Civil War storyline, and if the movie couldn’t tap into Avengers: Infinity War, at least it can continue the path of the Captain America movie. It’s great when movies connect and when events in one lead to consequences in another, and here, the ankle bracelet monitoring is actually a major part of the movie. We even get to meet and spend a number of scenes with the head t agent in charge,Jimmy Woo, (played by Randall Park.) And he’s incredibly funny in this film.

We learn that Lang has been doing everything under the sun to entertain his daughter without leaving the house. This includes a sort of scavenger hunt through imaginary tunnels that they go through in the beginning, which is incredibly elaborate and fun. It feels like a mini-Indiana Jones adventure, complete with giant ants and a huge slide that takes them outside the house, from one floor to another. And all this is just meant to introduce us to the characters and to  Lang’s house arrest situation. But there are bigger problems on the table, such as Lang having dreams that bring him back into the quantum realm. When one of them has him looking and feeling like Hank Pym’s wife, Janet Van Dyne, Scott calls Pym up and leaves the old scientist a message.

The next thing you know, he’s in a van with Hope, (The Wasp,) being driven to Pym’s lab. And that lab turns out to be in a building that can be blow or shrunk at the quick press of a button. Hank and Hope have mastered the technology from the first movie to the point where Hank travels around with a container of toy cars which are all fitted with the ability to blow up into life size vehicles at any moment. He wheels the building that serves as his lab around, as if it were a suitcase. And he and Hope are very interested in Scott’s dream. They think they can get into the quantum realm and find Janet, still alive, in there somewhere. Only they still need some technology parts, and the guy that Hope goes to buy them from is interested in more than just selling her what she needs.

This guy is Sonny Burch, (Walton Goggins.) He’s a throwaway character. Goggins is a fun actor, (fantastic in Tarantino’s The Hateful Eight, and pretty comical in the HBO show Vice Principals.) But he’s not one to be taken seriously, and he’s certainly not menacing. Here, he’s the funny, goofball villain. His henchmen get into debates over whether or not there is a such thing as truth serum. And he wants a piece of whatever Hope is building with this tech. When she refuses to cut him in, he takes back the part. That’s when we get our first taste of the Wasp in action, kicking butt.

But soon there is another villain at hand, and that gives us Ghost. She’s got some history that goes way back with Hank Pym and his former partners. And now Ghost can’t control her phasing in and out of dimensions and the incredible pain it all is causing her. There are quite a lot of stories going on here, and Ghosts is the only one that seems to have real consequences. She’s the villain who keeps flipping sides and attitudes and who keeps us constantly on edge. As a result, she’s one of the more interesting characters in the movie.

The humor is strong here and the movie does move at a fairly quick pace. The problem is that there’s a little too much going on at any given time. Consider that there are four main stories here. There’s the one about Ghost and her problem and desperate search for a cure. Then there’s the one about Burch trying to steal Pym’s lab, (which becomes a huge macguffin here, leading us into a number of car chases and action scenes.) There’s also the story of the house arrest and the agents who want to nail Lang for not being home. And there’s the story of Janet Van Dyne, trapped in the quantum realm somewhere, and our characters trying to find a way to reach her. It’s all a little much. Two stories would have made for a much stronger movie. Maybe then we could have found out about Ghost’s third eye. But we get here is a whole lot of excitement, with very little real emotion or thought provoking ideas. It’s a fun time at the movies, but an easily forgettable film.