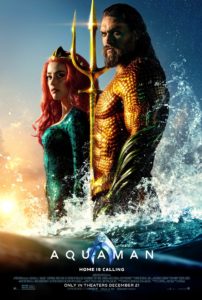 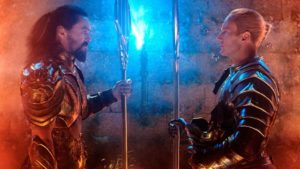 The story might not be anything vastly creative, but the movie looks fantastic and the action gets the job done.

This is an entertaining, sometimes fun, and other times kind of dopey movie. On the one hand, the story of a fish out of water (literally,) having to go down to Atlantis to a whole world that has always been hidden from humans, is kind of cool. Atlantis looks pretty great, and director James Waan has fun with the possibilities in terms of what action he can pull off here. But on the other hand, we’ve seen the story of sibling rivalry while competing for the throne again and again. We saw it in Thor and even more recently, we saw it in Black Panther. This movie follows some of Black Panther’s beats a little too closely, (having the first fight between our two leads in the middle, and then the rematch at the end, the older mentor who is in some ways caught between with these two protagonists.) The dialogue and jokes are pretty weak here, but the visual creatures and even some of the places the story takes the characters turn out to be kind of neat. For example, there is a whole mid portion of this film involving a quest to find a certain trident. And while the quest itself might be kind of pointless in terms of the main story of brother fighting against brother, it leads us to a globe trotting mission, (Indiana Jones style,) and some very cool locations, (both above the water and below.) The movie does a nice job of featuring two villains, whereas plenty of other films have failed with this. It might not be the smartest film, but it is a good deal of fun.

Aquaman is not exactly a smart film, and no one is going to make the argument that it is. But sometimes you don’t need to be the smartest film in the room to still be kind of fun. Like Venom proved, just a few months before this one, there is definitely a place in movie goers hearts for superhero films that take chances and dare to be crazy, as long as they don’t depress us (like Batman Vs Superman, Suicide Squad, and Justice League all did,) and give us some redeeming qualities. And that’s what this movie does. It looks fantastic, brings us into an interesting new world, and features Jason Mamoa having a ridiculous amount of fun. So what if the story is kind of dopey at times, there’s enough to like here, that we can get passed that.

Momoa is an actor who is built more like a wrestler. If the Rock and John Cena have proved anything, in the last few years, it’s that you don’t have to be a great actor to be a star. You just need to be a performer and to command the audience’s attention. You need to have the kind of presence that says, “I can take a joke and dish it out, but I can also kick your butt.” Basically, these guys, (who have all hosted Saturday Night Live,) have shown the world that they all have a strong sense of humor. And that goes a long way. Personality. Momoa was entertaining in Game of Thrones as Khal Drogo, but as a character who never spoke in English, the most he could do was intimidate with his stares and voice. It’s the D.C. movies, (bad as some of them are,) that really gave Momoa his big break and let him show the world some personality.

And Aquaman is the first movie in that cinematic universe that is his. Momoa, an unproven actor, is actually the star of this film. And the way they do that is by surrounding him with talent. From Nicole Kidman to Willem Dafoe to Patrick Wilson, they definitely picked. a good cast for this one. The known actors give us enough to make their roles memorable, (even if they are sometimes kind of dumb.) The unknown or lesser known actors, don’t quite measure up. In particular we’re talking about Amber Heard, who plays Mera, the love interest, and Yahya Abdul-Mateen II, who plays Manta. Maybe it’s not their fault, but these actors seem like they could have been replaced by anyone and. things would have turned out the same. Mateen in particular, seems like another version of Michael Jai White, or many other actors who could have played the same role.

The movie tells the story of a man who is born of two worlds. His mother came from the sea, from the underwater city of Atlantis, and washed up on shore one night. His father was a light house keeper who found her there and brought her home to nurse her back to health. Eventually she recovered, and the two of them fell in love. They had a baby and that baby turns out to be Arthur Curry, the Aquaman. This story is told to us before we really get much of anything else, and it includes one of the coolest scenes in the movie, when soldiers from Atlanta are sent to take Queen Atlantia, (Kidman,) home. They bust into the light-house keeper’s home, dressed in sleek white uniforms that put the storm troopers of Star War to shame. These outfits seem bubble powered and contain circular engined moving on them while lighting up, at all times. If nothing else, the costume design here is terrific. And they wield some pretty cool weapons, as Queen Atlantia decides to fight back and stops them in their tracks. The fight against these really cool looking characters, is great. The camera swings around the tiny room, in and out of the choreography. If all the action scenes in this movie were as good as this one, we’d have quite a film. But maybe it’s that the outfits of the soldiers look so cool, and this is the first time we are seeing them (compared to later on, when we are used to them and don’t care as much.) Whatever the reason is, the scene really works.

Queen Atlantia goes back to Atlantis, knowing that her son and husband will never be safe if she stays there. And so the boy is left to grow up with his father. His name is Arthur Currry, and before we get into his childhood anymore, we see the adult version take on a submarine full of pirates. One of these is Mateen and he leads the crew, which includes his tough guy father. These pirates dress in all black, and are trying to hijack the vehicle when Aquaman shows up. He not only defeats all the pirates, throwing.them all around, but ends of leaving Mateen’s father for dead, and move that will haunt Mateen for the rest of the movie and drive him to continually seek vengeance, (sounds a little like the Green Goblin story for James Francon’s character, Harry, in the Sam Raimi Spiderman trilogy.)

After the pirate sequence, we go back to watching Arthur We see him being bullied by others while on a school trip to an aquarium. That doesn’t exactly sit well with the sharks. Then we see Curry training with Vulko (Dafoe,) who has been sent to the surface to give the boy lessons, by Queen Atlantia, herself. And then we see him as an adult, going to a bar to have beers with his father. Here’s a portion of the film that doesn’t quite work. First we’ve got a terrible joke about bikers who look like tough guys, but really just want a selfie with Aquaman, using their pink phone. And then we get this problem about the King of Atlanta, (King Orm, Aquaman’s brothers, played by Patrick Wilson,) getting mad at the people of the surface for polluting all the water, and throwing all the trash back up onto the beaches. We don’t see how he does this or anything, (and that might have actually been kind of cool,) but instead, a ton of garbage just washes up, one every beach, and Aquaman is called into action.

He’s brought in by Mera, who needs him to come to Atlanta and stop his brother, before Orm rages war on all the people of the surface. That’s whst he’s planning to do, but there’s another reason why Mera wants Aquaman to come back with her too. She’s being made to marry Orm, and can’t stand the man. Maybe Aquaman can save her from this. e And that leads to our brothers vs. brother, fight for the position of king, story. We’ve seen it before in recent years with superhero movies. First with the original Thor movie, and then, more recently with Black Panther. Sibling rivalry while in a new world, and our heroes compete to be king. Aquaman is the weakest of those three. Maybe that’s because it doesn’t take the time to explore Antlantis, so that it really seems like. a lived in place Asgard and Wakanda have both, most certainly got this one beat.

Despite the familiar story, the movie still kind of works. It works because its smart enough to divide up the locations so that this never feels like too much of one thing. So the first and last portions are underwater, (let’s say acts one and two and four and five,) but in between, we get act three, which is completely land based, and feels like something out of National Treasure or Indiana Jones. This is where Aquaman and Mera go on a globe trotting chase for a trident that will prove he is the one true king. The trident itself is a macguffin, but the scenes we get from the pursuit are kind of cool. There’s a quicksand scene in the Sahara that leads to an underground secret passage, and then in Sicily, the characters face off against a newly enhanced version of Manta, for what is probably the best action scene in the movie. It’s so great because the camera work really gets creative here, with long tracking shots and pull back shots that reveal different things happening in the same area, at the same time.

The hunt for the trident doesn’t just stay on land. After putting some clues together, it brings us back underwater to an area filled with ferocious sea creatures who jump on Aquaman’s ship and follow him all the way down to the bottom of the sea. These creatures look great, and it’s pretty cool that the movie was able to hide them from all the promotional material, leaving them for a pleasant surprise here, (remember when Batman Vs Superman felt the need to show is Doomsday in the trailer, despite him being the very last action portion of that movie?) In Aquaman, the trident hunt ends underwater and leads to Aquaman getting his big fight against King Orm, for the throne.

But before the two of them can go head to head on the roof of a submarine, we get an all out underwater fight involving tons of sea creatures going nuts. This is another fantastic scene. Just watching the different things that each character comes riding in on is pretty neat. This is the “splash panel,” of the movie, if you will. It’s the biggest action scene, before a smaller one is used for the one on one, more intimate climax. And it’s fun. So is the movie itself. There’s nothing especially smart here, and the dialogue and storyline don’t help matters, but the underwater world is pretty neat and in the hands of director James Waan, (The Saw movies, The Conjurring movies, and even some Fast and the Furious work,) this one looks pretty great.