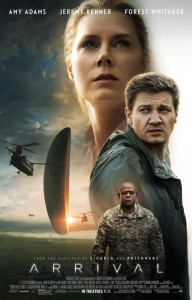 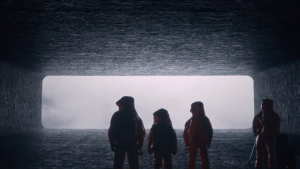 Some cool ideas are at play here, and as an art film, this one looks fantastic, but the story moves way too slowly for its own good.

Arrival is not the movie you might hope it to be. Now it is smart and interesting, but it’s far from exciting. This is not a cool alien movie with amazing action, told with tension and mystery. Instead, it’s more of an art-house kind of movie.

The film was directed by Denis Villeneuve, who made Prisoners and Sicario. Both of those movies were intense masterpieces of suspense at the highest levels. Both were my favorite movies of the year, for the years they came out. But Villeneuve also made the quiet mystery film Enemy with Jake Gylenhal, a movie that showed massive amounts of restraint. It was cool and smart, but also kind of slow. Arrival is a lot like that film.

It is absolutely the slowest of this directors work. The pacing is the biggest problem here. Cinematographer Roger Deakins (who shot Prisoners and Sicario for Vileneuve,) is gone, but the movie still looks great, with grand sweeping shots over landscapes. But the excitement element is missing, and maybe that’s because this movie refuses to dazzle us with cool imagery. There’s a little too much that is blurry or unclear, regarding the aliens, and maybe Deakins would have been able to help the movie out in that department, at the very least by giving the inside of the alien ships some more character.

These alien ships, known as “shells,” are basically just bland, grey eggs. They hang vertically in the air with little detail at all. But at least that’s better than the way we see the aliens themselves, from behind what looks like a glass window or screen, that makes everything blurry. This movie is out to make the point that it is not about the aliens or their technology. It’s about language, government, and time. Too bad. The aliens would have been a lot more fun.

The best comparison to this piece is the movie Contact, with Jodie Foster and pretty much nothing in the ways of Aliens at all. And yet, Contact was a fun movie because of the way it explored unique questions. Same thing here. In Arrival, there are bigger concepts at play than just aliens. With Villeneuve as the director, I suppose that shouldn’t really be such a surprise.  Both Prisoners and Sicario certainly challenged our morality and ethics in all sorts of ways. Arrival doesn’t really dig at our emotions as much. I suppose it has shoes that are just too big to fill.

The movie is about  Dr Louise Banks (Amy Adams,) a linguistics professor who is called into work by the government when the ships show up. She is approached by Colonel Weber (Forest Whitaker,) and partnered up with Ian Donnelley (Jeremy Renner.) Big before that partnership is formed, both Banks and Weber give each other a sort of test. With him, he wants to see if she will translate without going to the actual site. With her, she calls his bluff, sends him away, and gives him a question to ask the next translator he goes to, before making his decision.

And then we get the characters boarding the ship. They do this through a trap door that opens underneath, once every hour or so. Then an electronic lift brings them up. The inside of the ship is basically a tall tunnel and then a room with a screen. That’s about it. The tunnel has some near moments, like when they throw a flash light up and it sticks to the wall, but everything seems to be done at a minimum. This movie is certainly not out to impress us.

The aliens are kept blurry from us and behind the screen pretty much at all times. But we do get to see their language, written and appearing on the screen as a circle drawing with different marks on it. Each mark represents a word. Our characters find a way to interpret and decide this.

When the message they decode involves the word “weapon,” everybody gets in a panic. The message is received by people studying  each of these ships around the world, and China declares that they are going to attack the ship. The movie then becomes about Louise trying to stop them.

The final act of the movie is by far the best. It’s the only time of the film that actually gives us an antagonist,  (Agent Halpern, played by Michael Stuhlbarg,) and also a twist. There’s a cool ending here, and it’s almost enough to make all that slow build up worthwhile. But not quite. This is definitely a smart movie that demands repeat viewings, (mainly for its ending,) but I sure do wish it had been more fun leading up to that.