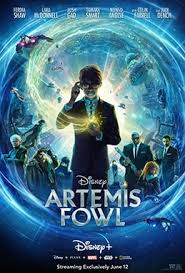 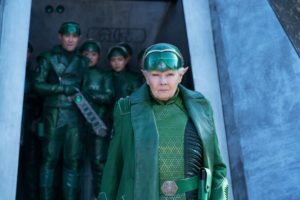 Not bad for a while, this movie really falls apart in its second half when it becomes apparent that the story will all take place in and around a house on earth, despite advertising that there is a whole other world out there underneath the ground.

Artemis Fowl is not a very good movie. It’s a world building movie that doesn’t really give us that other world. This is a film based on a popular children’s book series about a kid who discovers that there is another world out there with fairies, trolls, dwarves, and other sorts of mystical creatures. Sounds a little like Onward right? Only in that movie the characters were always there, but what the protagonists learned was that magic was real. Artemis Fowl is about humans learning that these characters and this other world is real. And that would have been all well and good if the movie actually explored it. Only unlike what you might expect, Artemis doesn’t actually go to this other world. He doesn’t go on a mission at all. In fact he never even leaves his house. Instead, the characters come to him. While that might sound like a nice twist on the usual other worldly film, it actually turns out to be pretty boring. The excitement of a fantasy adventure story is going on a mission. Going out into the world. And this movie bypasses all of that.

At the start of the film, we are at Fowl Manor, a mansion that is the home of Artemis, his father, Artemis Senior (Colin Farrell,) and their butler, Dom, a big burly man. Artemis Senior has gone missing. The news reporters are all over the story and are outside the manor with their cameras. And the mysterious disappearance of this man turns out to be only half of the story. The other half is that he is a thief who has finally been discovered. And poor Artemis learns both things about his father at the same time. He’s standing there, watching the news report and listening to the story about his father, and his jaw drops. And we are left wondering if his shock is in learning that his father has disappeared, that his father was a thief, or both. Turns out, it’s both.

At the start of the movie, the police found a man outside of Fowl manor who seems suspicious and like he might have answers. So they bring him in for questioning. This is Mulch Diggums (Josh Gadd.) The finding him and bringing him in is actually a flash forward. Either that or the entire movie other than what is happening to him now is a flashback. Mulch sits down in an interrogation room and starts telling the story, which starts three days earlier.  He tells of how the reports came out about Artemis Fowl senior, the son Artemis saw these while in the manor, and that’s when the butler, Dom decided it was time for Artemis to learn the truth.

Now we start watching that story, and the “flashback,” becomes the story of the movie. Dom has something to show Artemis, which is about to change the boys life forever. He takes Artemis down to a hidden basement and where he steps into a room filled with shelves that pop out of the wall and are loaded up with secret treasures and relics of another world. This is probably the best scene in the movie. The items Artemis finds are like little clues to what is to come. Now, what it is to come isn’t actually all that great. It’s kind of like how in a monster movie, once you see the monster, it’s not all that scary. But when it’s in your head and left to your imagination, it’s that much better. Jaws employed that tactic, not showing us the actual shark, (other than a fin,) for a while. Well, the same thing here. Once we see the world underground, it’s not all that great. But the little hints about it, like what we find on these shelves are much cooler than the actual reality of the thing.

Now, we travel underground to the world of magic. This is the other world of the movie. Only Artemis never goes there. And the action never goes there either. Instead, it was more like a watchtower that we occasionally pop in on and get a glimpse of, as the character down there are watching and monitoring what is happening on earth. Think of it like the moon in the Truman Show, where Ed Harris was watching everything that was happening to Truman from. You would hardly call that another world. And if it is supposed to be another world than they sure do a lousy job of presenting it. Down here, under the earth, Mulch has been imprisoned. Remember, this is where his story really starts, because everything we have seen of him so far is three days in the future. It sounds more confusing than it really is.

But here’s where the plot starts to kick in, and it’s not very good. There’s an object called the Aculos. It’s a prized possession of the the fairies, and something that Artemis’ father has stolen. And the fairies want it back. So they send start putting together a task force of fairies to go after it. Now, all of this is centered around a macguffin. What exactly is the Aculos and why is it important? The movie doesn’t seem to know or care. It’s tough to make a movie where the entire plot centers around finding a macguffin. Some movies can pull it off, like Pulp Fiction with the suitcase, or Mission Impossible III with the Rabbit’s Foot. But here, when it is made painfully obvious from early on in the film that all they’ve got to go in is this McGuffin, and the movie plans to center it’s entire plot around that, we’ve got a problem. Mainly, it’s that the movie doesn’t really give us a reason to care.

The head of the Elf task force, (called the Lower Elements Police Reconaiisance – or LEPrechon – because it’s trying to be cute,) is Root, played by Judy Dench. Boy was this a waste of a talented actress. She has nothing to do in this movie other than bark orders and then sit and around and watch what happens. When a creature is found on the earth’s surface who doesn’t belong there, Root sends out a fairy named Holly to investigate. What in the world does this story have to do with the one about the Aculos? Nothing at all. And so the movie gives us a ridiculous way of tying them together just to act like it makes sense… Holly’s father is the elf who stole the Aculos and brought it to Artemis Senior. Now, if that was true, then why would Holly be sent out on another mission at the same time that the elves are trying to retrieve the Aculos? Don’t they think maybe she will turn on them and side with her father, or the cause he was fighting for? Maybe choose a different elf to go investigate the disturbance.

Basically what happens now is Holly is discovered by Artemis near a tree on his property that has some meaning (another McGuffin,) and she is imprisoned. That’s when an army of elves show up and put some kind of time freeze over Artemis’ mansion. But he is able to unfreeze it. And then they send in a giant ogre, who attacks inside the mansion until Artemis is able to put him down. And that’s about it. That’s the extent of the plot. How anyone thought this was enough of a story is pretty insane. The movie throws in a handful of other characters, including Dom’s niece who shows up at the manor and helps with the imprisonment of Holly. And then there’s a villain hanging out with the fairies, down under the earth, who secretly plots to sabotage the fairies. And there’s another villain who is the one that has kidnapped Artemis’ father and is holding him hostage until he gets the Aculos back.

None of these villains or characters is really given a whole lot to do. None of them is ever explained or justified in any way. Maybe less would have been more, in terms of giving us one threat and really concentrating on establishing and developing that character. Only, it’s not like this movie had so much going on that it would have been hard to do that here. It should have been a no-brainer. The same can be said about all of the McGuffins. The last movie that used two McGuffins because it seemed to have nothing better to do with it’s plot was the final Star Wars film in the Skywalker series, the Rise of Skywalker. And what a mess that movie was. It was so bad, it might even deserve a place right beside the prequels. Well, Artemis Fowl isn’t much better. A story that sends us going after one McGuffin and then another isn’t really much fun at all, unless there are other things going on (like interesting characters,) to make us care. Without those things, what’s the point?

Artemis Fowl has a whole lot of problems. The McGuffin thing is one of them, but that’s far from it. Sure, the plot is thin, but what doesn’t help is that there is apparently a pretty cool world underground that we never really get to explore. Clearly they’re trying to save that for sequels, but if you can’t make a good movie without showing us that, then show it. Otherwise there won’t be any sequels. Now, to be fair, they do show us that underground world, only it is brief. The story never actually takes place there. And that’s a problem. Because Artemis never leaves his mansion and that makes the movie feel way too confined. Now, I love movies about a single home or location, from the mansion of Clue to the car of Locke. But the problem is, those movies around about fantasy worlds. If you’re going to make a movie about a fantasy world, then bring us into that fantasy world. Have the protagonist visit it. This movie keeps Artemis in his mansion, and that leads to the whole thing being pretty pointless and uninteresting. Especially when we know what could have been.