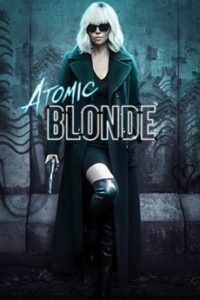 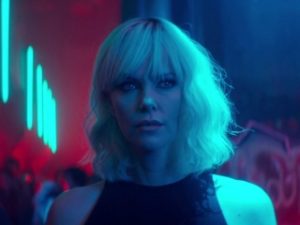 Very big on style and atmosphere, but not quite as much on story or action.

A pretty decent spy movie, this one disguised itself as an action film, but di ant quite have enough action in it. As directed by one of the guys who made John Wick, you come in expecting something more than this. And what we get is a somewhat complicated thriller filled with double crosses and diversions. Set in East Germany during the time when the Berlin Wall came down, this movie is too focused on history and its bleak, dark and gloomy atmosphere, and not focused enough on plot. The story is find, and there is one amazing stairwell action scene. But other than that, this is pretty routine stuff.

Atomic Blonde is the first movie by director David Leach, breaking out on his own. Leach co-directed one film before this, and it was the great action movie, John Wick. He was a stuntman before that, and Wick showed off some amazing skills as an action director. But with Atomic Blonde, the same level of both storytelling and stonework isn’t quite there. The movie is interested in telling what it considers to be an elaborate Cold War spy thriller story, and instead gives us a sometimes interesting, sometimes dull film. And the action isn’t there, the way it should be. There’s one action sequence that is truly amazing and shows off how good this movie could have been, had that same level of energy and choreography been inserted into more portions of this movie.

The movie takes place almost entirely in Berlin, during the time period of the eighties when the Berlin Wall was coming down. The good thing about setting the movie in the eighties, is that it opens the music choices up to providing us with a killer soundtrack. And in that department, this movie goes all our, giving us everything we can ever want. We’re talking about Blue Monday, 99 Red Balloons, Major Tom, Der Komisser, I Ran , London Calling, and Under Pressure. Talk about some great music choices.

But the negative to setting the movie during this time, and in this place, is that we get a very cold, very bleak looking movie. If there’s one thing that both Bridge of Spies and this film show us, it’s that Berlin during this time, was not a very good looking place to be. And the movie tries to disguise that fact by putting in some scenes in clubs and hotel room, featuring unique lighting, but it just doesn’t work. One or two scenes sprinkled here and there can’t hide the fact that most of this movie takes place in one of the most depressing and ugly locations around.

The story on hand here isn’t bad, but it’s not anything special either. It opens with an MI6 Agent getting murdered in Berlin. Then we cut to another MI6 Agent, Lorraine Broughton, (Charlize Theron,) being brought into a room for an interrogation. The subtitles tell us that this is ten days after the Agent was murdered. She starts telling her story, and we go back to immediately after the Agent was murdered, with Broughton being called into Berlin to find out what happened to him. So in those first few minutes we move back and forth among three different time periods. The first thing that happened, (the murder,) the third thing that happened, (the interrogation, and the second thing that happened, (Brroughton’s experience in Berlin.) It’s a pretty cool way of fracturing the narrative.

For the rest of the film, we go back and forth between the scenes of Broughton in Berlin and the scenes of her during the interrogation by her MI6 superior Tobey Jones, and a CIA agent, played by John Goodman. They want to know what happened to her in Berlin, what happened to their list of spies, which was stolen from the murdered agent, and what happened to another one of their top agents, a man named David Percival, (James McAvoy.) And Broughton has the answers to all of these questions.

From here, we start following her story in Berlin. When she first arrives, a car picks her up with two men in it, and they say they’ve been sent by the agent she’s supposed to be meeting. It isn’t long, however, before she figures out that these men aren’t who they say, and Broughton fights them off while in the car. And after taking them both out, a car pulls up behind them and it is indeed the agent she’s supposed to be meeting, Percival.

Percival is an interesting character. James McAvoy plays him as a sort of drug addict nutcase, addicted to violence and living life on the edge. He reminds me a lot of Begbie from Trainspotting. For McAvoy, this is a very different role than the kinds of things he’s taken before. Just think about how much this one differs from what he did in Wanted, playing a boring, goody-goody nerd. Here, he is the exact opposite. And it’s the liveliest role in the movie. Unfortunately there aren’t many other performances that are memorable.

While the quest of the movie is pretty straight forward and simple, with Broughton having to find the watch that has that contains the list of spies inside it, they still try to make this film as complicated as they can. That’s very different from what the John Wick movies strived for, giving us straight up action movies, with a very basic revenge plot. Here, they don’t want to give us a simple plot, and they certainly don’t want to give us a lot of action. That’s a real shame, considering that the primary reasons someone would come to this movie is for the action.

And it’s also a shame because when the movie does give us an action sequence, it is absolutely fantastic. There are a handful of brief action scenes sprinkled throughout the film, here and there, but there is one particular one that stands out way above the rest. It features Broughton fighting off two men in a stairwell, and is filmed with steady cam tracking shots, where they try not to cut, and instead just keep following the characters, moving wherever they move. The choreography is brilliant. The brutality and way the scene is played without any music, is great. And the camera movements work so well for this.

Broughton fights off a few more guys in the stairwell, and then gets into a car for a chase sequence, and again, we are given some top notch choreography. The car chase scene is another masterful one. But put together with the stairwell scene (since the two scenes happen back to back,) the entire sequence is probably about five minutes. And it most certainly shows you what this movie could have been. This could have actually been the next John Wick. Clearly this director has a niche in the way he films action. It is brutal and realistic and absolutely thrilling. But there’s just not enough of it in this movie.