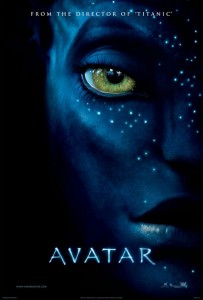 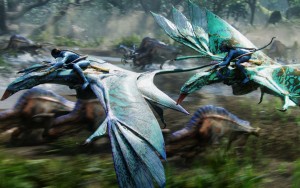 A Fantastic fantasy that creates a new and imaginative world, even if it’s storyline and characters are a little cliched.

Avatar is a pretty amazing movie in terms of fantasy, computer graphics, and the creation of a whole new world. it is the story of a new planet and of a future where humans are trying to get at this planet and separate the creatures who live there from thier homes. that’s because there is a valuable mineral resource that has been found underneath the giant tree that the navi (the people who live here), hold sacred. the premise, in which the scientists are the good guys and the military are the bad guys, might be a little cliched and silly, but the attention to detail and art of this film make up for it. the computer effects are state of art, and director james cameron has really put the time in to create not only a futuristic world for the navi, but also for the humans. the story might feel routine at times, but it is still kind of fun, with jake (sam worthington), playing both sides against each other, not even sure himself, which side he is really on. it’s the creatures and colors that really bring this movie to life, but the story is good enough to lead us into some fun action scenes, and that’s really all you can ask for.

Avatar is one of the great fantasty / sci-fi / action movies of our time. when i say our time, i really mean of the past two decades or so. there are big movies that become sensations and lead to trilogies and are worth seeing again and again. usually that’s because the ideas are great and the technology is innovative. from the star wars movies to the terminator movies to the alien movies to the lord of the rings movies, each one of these set of films is fantastic in it’s own way and has had major influences over the future landscape of cinema. Avatar might not be a trilogy yet, but it certainly has a worthwhile entry into the arena with this first film. and i doubt it will go the route of the matrix films (that could have been such a cool trilogy if they just took their time to develop the second and third film instead of rushing them), because clearly Avatar is not rushing to make it’s sequel at all. the movie came out in 2009 and it will be at least six years before we see it’s sequel. that’s a very good thing.

Avatar is probably closest to star wars as far as sci fi movies go, in the sense that it creates a whole world filled with strange creatures and ways of life. every one of those movies, from terminator to alien, offers up some new technology, (new robots or machines in the film, that we’ve never seen on screen before), but Avatar is the rare film that creates a whole new planet. james cameron, Avatar’s director, is of course the man responsible for the terminator series, and the man who gave us the best of the alien films (aliens, the second movie), and with Avatar, he takes his visions of creatures and science much further than he ever has before.

cameron is also the guy who made titanic, which was the biggest movie in the world at it’s time (1997). that time lasted for close to an entire year. this guy is on the cutting edge of technology and what can be done using computers, and you can tell that Avatar was a project of his that he had been working on for a long, long time. cameron was just waiting for the technology to be right. and then finally, one day, it was. he invented ways of shooting this movie that allowed a camera to move over a stage and see the fake computerized background that the movie would be showing. he also used motion capture for his main characters in a way that had never been done before. and all of this is to say nothing about 3D, and how he single-handedly made that a new way to see movies, with just this one film. Before Avatar, the only movies that got 3D theatrical releases were computer animated ones like beowulf or the polar express.

but all of that influence over the future means nothing if Avatar itself is not a good film. fortunately, it is. filled with amazing action and interesting ideas, this movie has a lot going on. it combines story elements from other movies (total recall, dances with wolves), but so what? the best movies all do. these days it is nearly impossible to be totally, 100 % fresh and new. i suppose memento did it, but even with that movie you could compare the way it’s fractured narrative jumps around, to that of pulp fiction. minority report, another great sci-fi movie, used elements from l.a. confidential and the fugitive. so what? as long as the movie isn’t too similar to something else, that it feels like we are watching the same thing, taking a few story elements here and there is no big deal.

the story in Avatar is about a wheel chair bound marine, named jake sully, (sam worthington), whose brother has just been killed. his brother was all set to go on a mission where an Avatar had been created for him. an Avatar is like an alien creature’s body that jake can go inside and walk around in. this is where the total recall elements come in. we follow the creature as jake inhabits it and has adventures in that body, but at the same time the real human body of jake is strapped to a chair somewhere, (in this case on what looks like a tanning bed), eyes closed, totally asleep.

there are two factions of humans, exploring the new planet. there’s the military and then there are the scientists. there are only a handful of scientists, led by grace (cameron’s old aliens friend, sigourney weaver). They are the good guys. the military represents the bad guys. they are led by a tough as nails older dude, colonel quaritch, (stephen lang) who is ripped and angry and wants to destroy everything in his path. the characters are somewhat cliched, but what makes up for it is the storyline that allows jake to have a foot in both camps.

giovanni ribisi plays the guy with all the money who finances both operations. his character, parker, is the slimy weasel who gives the orders and makes the jokes, but then sits back and watches while others die. he’s probably the most cliched character in the bunch. ribisi’s goal is to find an element called unobtainium, which is on this planet. the biggest deposit of it is right under the tree that the navi (the people-like creatures of this planet), hold sacred. his goal is to get the navi to willingly move away from the tree so that he can have at the unobtainium.

the reason why he finances the scientists and the Avatar program is so that these people can pose as navi creatures, learn the ways of the navi, and convince them to peacefully move away. only it doesn’t seem like that message has really spread to the scientists. at no point in the movie do they actually sit down with the navi and tell them about what the humans want, and about moving away from the tree. finally, when the humans come to attack, jake tells the navi of what his mission. by that point it’s way too late.

while the story might not be anything special, the scenery, creatures, and action are quite amazing. i love all of the gigantic human technology on hand here almost as much as i love the different lifeforms they find on the planet. those lifeforms include all kinds of cool looking beasts and some fantasticly interesting plant life. the colors here are truly amazing, with lots of the plants and atmosphere taking on a glow in the dark look. these plants light up when you touch or step on them, but only for a second before going dark again. there are also plants that spin around in the air, and others that fold up immediately if you go anywhere near them. but the plants are only half the fun. the creatures, (most of them savage,) are also pretty wild and crazy.

i love the way this movie brings in all sorts of elements, including giant flying creatures that are a mix between birds and dragons, and the way that it is through the synapses in the hair of the navi that they are able to literally connect with these creatures. there are plenty of things to roll your eyes at here, when you watch this movie, including many of the names they came up (unobtainium, the halleluyah mountains), but for the most part, everything we are seeing is pretty neat. the action might be all computerized, but it doesn’t really feel like it. that’s because machines move as if gravity were really pulling on them, and everything is developed with the most extreme attention to detail. the climax is a giant battle of incredible proportions that really ends the movie with the massive scale that it was building to. Avatar definitely has it’s flaws, but for the most part it is a remarkable sensation of creativity.