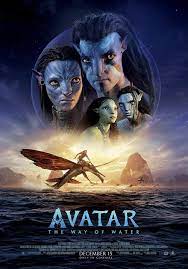 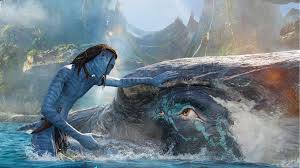 Cool visuals, but a story that is just okay, and a movie that is way too long.

This is an example of how to make a CGI movie the wrong way. Yes, the movie has cleaned up at the box office, mainly because everyone wanted to see it in 3D, which means lots more money flying in, but the movie itself is pretty lousy. First off, it is three hours and twelve minutes. That run time is ridiculous. Secondly, the characters all look the same The humans are out of this movie. Gone. They are replaced by tons and tons of blue Navi. Even the villains are Navi. And the story? If you consider watching a guy talk to the eye of a whale for long stretches of time exciting, then this one might be for you, but otherwise, it is way too long and way too dull.

Avatar 2: The Way of Water is pretty good for a while. And then it goes on. And on. This is one of those movies where you really feel its length. At three hours and twelve minutes, it would be hard not to. It’s also hard not to realize how much better and different this movie would have been if it had been brought in at two and a half hours. Or two hours. But aside from the length, the story and characters aren’t all that gripping. Computer tech is great, but when pretty much everything and everyone on the scree =n is CGI, you really need one hell of a story to make up for it, and this movie just doesn’t have that.

To cite some examples of movies that did make it work, for frame of reference, there’s Sin City and Alita: Battle Angel (both directed by Robert Rodriguex.) Sin City used CGI in every frame to give the movie a comic book feel, but it also used human actors and real life situations. Alita:Battle Angel was similar. But in that movie, we did get whole scenes that featured no humans at all. Like when Alita participated in a roller race against other decked out monster machines wielding all kinds of weapons. And that scene worked because the landscape was fascinating, (the race track,) and also the characters all looked different and creative. In Avatar, the landscape is dull (on board a ship,) and the characters all look the same (even the bad guys are blue Navi.) These things definitely weigh the movie down.

Now, Avatar one worked. It was long just like the sequel, and featured the same new world, Pandora. And it featured the Navi as a race of blue creatures. But it had many things going for it that the sequel does not have. First, and foremost, it has human villains. Stephen Lang’s Colonel Miles Quaritch was a villain for the ages. He and Giovanni Ribisi were great together as the man on the frontlines and the man behind the scenes, in charge of the tech and finances. Lang deserves a lot of credit for making that movie as good as it was. You can’t have a good movie without a good villain, and movies where the villain is forgettable, usually end up being forgettable as well.

But unfortunately, Avatar 2 got a little too hung up on itself and the actors from the first movie and decided to bring both Lang and Sigourney Weaver back. And the real unfortunate part is that they brought Lang back as a Navi. So even though the Miles Quaritch character is dead, his memories have been cloned and put into the body of a Navi who is now the villain of this movie. To be clear, that means the villain is no longer human and looks just like all of the other characters. That’s a problem. At least have him discover that there’s another race of creatures, a more powerful race, that looks different (maybe they are red instead of blue,) and he takes the body of one of those creatures. But having the villain be a Navi as well is a huge mistake.

The other thing that the first Avatar movie had going for it, that this sequel does not, is a limited amount of Navi. There was Jake (Sam Worthington,) and Neytiri (Zoe Saldana) and other than that, the characters were not very prominent. Yes, Neytiri has parents, but they were forgettable. The only other Navi who was significant was the one played by Sigourney Weaver, and both she and Jake had counterparts in the human world, whose human forms got significant screen time. Here, in the sequel, the humans are out. Jake has gone full Navi, meaning we never see him as anything else. But does he still have a human body out there somewhere? Is he still plugged in? These ideas could have been interesting to explore. But it’s all blue all the time in this movie. Too much of the same thing is a problem. Too much of the same thing for three hours and twelve minutes is a massive problem.

And speaking of how that first movie had only three or so significant Navi, in this sequel, the amount has gotten out of control. Jake and Neytiri have kids, and their kids are pretty much the stars of this movie. The story here is about how Quaritch (as a Navi,) continues to hunt Jake and his family (for no good reason here, but the movie says its to send a message to the other Navi that their leader can be killed.) And so Jake and his family get up and leave. They go to another part of Pandora, where there is an island of other Navi, and join their tribe. Now, luckily, these characters look slightly different. They are a lighter blue. Thank goodness for that. And there is some interest to watching the characters bond. Specifically the kids who definitely do not get a long for a while.

At this point in the movie, we’ve got not only Jake and Neytiri, and not only the leader couple of this new Navi group,  Tonowari and Ranal (played by Cliff Curtis and Kate Winslet,) but we’ve also got all of their kids. And we’re talking about three kids each, for six kids total. Are you starting to see how this is getting tricky? Six kids, four adults, for ten Navi that we are supposed to be following, plus the villain is Navi too. Thankfully the movie does feature some new creatures in the sea. There are the long necked fish that they ride, and also the whales. And all of this does look beautiful. Cameron and technology and beauty are perfect matches. But the storytelling and characters in this movie are not up to his usual standards.

Jake’s children are two boys and a girl. Keeping track of all of their names requires more effort than I’m willing to give this movie, but the younger son really doesn’t get along with the son of the other tribe. There is a fist fight that takes place, and Jake’s son tries to make amends and apologize. The son of the new tribe brings him out into the ocean with his friends, pretending to accept him, although any fool can see a trick coming from a mile away. The native Navi and his friends leave Jake’s son and his attacked by a giant sea creature. Now this is exciting. Probably the best part of the movie. He ends up getting rescued by a whale.

For a solid chunk of the movie, now, the son has interactions and conversations with the whale. They become friends. Only the whale doesn’t speak. So the conversations are really just the son swimming up to the whale’s eye and talking. All of this would have been fine for one scene. But when it is repeated over and over again, it gets tiresome. And we start getting into the whales backstory. We are shown flashbacks and are made to believe that the whale is considered a monster and an enemy of the Navi, when really he is just misunderstood. Really? All of this for a character who doesn’t talk? Who the most you can see of his face is an eye? Granted they try and explore this whale in different ways, including having the son go inside it’s mouth, and down into it’s belly at one point, but it sure feels like they are stretching out their ideas,  when they should have been going the opposite route, and condensing, for a less is more approach.

Avatar 2 is basically just too much. It’s too much of everything. Too much running time. Too many Navis. Too much being out to sea. Too much hanging out with the whale. The action doesn’t really feature new robotic creatures or tech, the way the first one gave us those awesome mech suits (a beefed up version of what Cameron did practically at the end of Aliens.) Instead it just features a lot of machine guns and a lot of Navi on Navi fighting. There are lots of ways that this movie could have been better, and most of them seem pretty obvious. By the end of the movie, they seem to have figured out that there weren’t enough humans, because they start throwing in human characters left and right, (the ship captain, then the scientist played by Jermaine Clement,) only at that point, it’s too little, too late. You had a three plus hour movie and you wait until the final section to introduce these characters? Meanwhile, the only human who is moderately interesting or memorable in the first half, played by Edie Falco, is dropped in the second half. The movie sure does look nice, but that only gets you so far. As far as being entertaining, this one is a dud.