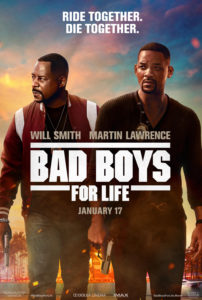 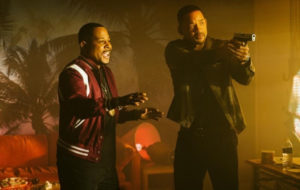 A fine entry in the series, and way better than the second movie, this one has a cool ending, but other than that doesn’t really have enough to make it memorable in today’ competitive action film market.

When the Bad Boys franchise debuted in 1995, it was like nothing we had ever seen before. Sure, there had been plenty of buddy cop movies already, from 48 Hours to Lethal Weapon. But this one delivered not just on the humor, but also on the action, in a way that looked like a glorified video game. This was Michael Bay’s debut movie, and he had a lot to prove. As a music video director, being given the reigns to a feature film, Bay went all out. This was the beginning of the mid-nineties action movie (this and Die Hard With A Vengeance.) Bay brought in orange skies and a quick paced comedic ride, the likes of which we had never really seen before. He did it again the following year with The Rock, and that movie was even better. This was a guy who was hungry to show off his talent, and with Bad Boys, that’s exactly what he did. The movie worked. Unfortunately, about a decade later, it’s sequel did not. And in the two decades that followed, both of the stars of this franchise began to lose their luster, more and more.

So did director Michael Bay. The Transformers movies started out decent enough, but he rode them to the ground, making four or five of those movies until his name became a bit of a joke. Fortunately, Bad Boys was smart enough to cut ways with Bay before turning out a third film, (if only Transformers had done the same, both Bay and The Transformers series would have been in a much better place right now.) But Bad Boys is indeed back for a third film, and this one is far better than the second. It’s nothing great or memorable, but in terms of goofy fun, this movies accomplishes it’s goal. And it has a decent story too, including some nice connections to a character’s past and fleshing out of back story in a way the franchise definitely needed.

The twenty year gap between movies was enough to make this one feel nostalgic. Let’s put it this way, nobody has seen Will Smith in anything decent in years. And people want to see him. He’s a likable star. But he hasn’t given audiences anything to get behind. So now, with Bad Boys 3, audiences are flocking to the theaters in droves. The movie has been cleaning up at the box office, holding down the number one spot, week after week. And that means something. It means more sequels, for one. But it also means the audience is liking it, and feels like it has something to offer. And it does. This is the first Bad Boys film that is a real mystery, as our heroes need to uncover the reasons why this new killer on the scene seems to be specifically after Mike, (Will Smith.)

The movie begins with a similar kind of story to what we got in the last film (which was over a decade ago,) with Marcus, (Martin Lawrence’s,) daughter getting married and having a baby. In the last movie, it was Marcus’ sister dating Mike. The connection is that it’s all about Msrcus’ reaction to things going on with his family members – how he has no control, and isn’t happy about how things are turning out. This time the issue is that his daughter is pregnant and not married yet. And Marcus isn’t entirely sure of how he feels about the guy his daughter is marrying too. All of it is the stupid kind of comedy that got us to stop caring about the series and characters in the last movie. Luckily this material is short lived, and it’s just some warm-up fare to remind us a little bit about the characters.

The real story kicks into gear when we watch a prison break in Mexico, with a woman killing everyone in her path to get out and meet up with her son, who shows up right outside the prison walls to come get her out. The escape scene is elaborate and involves hiding in a washing machine, covered all in black. By the time it’s over, we know that this woman is definitely someone to be feared. And we quickly learn that her son is as well, when he meets up with arms dealers and reacts fiercely to the way they are treating him. This son, Armando, gets hustled by a guy who he had a deal with. At that point, Armando goes all out on this guy who ripped him off, and anyone who is there on the docks working for this guy. He assassinates every one of them in the blink of an eye, in what is an incredibly well choreographed and ferocious action scene.

The story here is between Armando and his mom. His father was a drug dealer who died in prison. Armando’s mother has set her son off on a path to kill anyone who was involved in dismantling their families crew and putting both her and her husband away. This includes a number of officials, such as Captain Howard,(Joe Pantaliano, reviving his role from the previous two movies,) and Mike. Armando’s mother, Isabel, tells him to save Mike for last, so he can watch all the others die before it’s his turn. But Armando doesn’t listen. He targets Mike as the cop is leaving a party one night. Armando comes riding up on a motorcycle, blasting away from a machine gun, for a hit and run.

Mike doesn’t die. He recovers in a nearby hospital. Armando, meanwhile, posts the video of him shooting Mike (taken from Armando’s point of view,) to You Tube. And the video ends up being all over the news. At this point, Marcus prays to god that if Mike survives, he will retire. Mike does survive, of course, and asks for Marcus’ help in catching the assassin, but Marcus refuses. He’s keeping to what he promised. So Mike joins up with AMMO, a team of young detectives working the case. Captain Howard doesn’t want to put him on his own attempted murder case, but Mike says he’s going after the guy no matter what, so better off working alongside the team.

Together they track down the dealer who sold the weapons to the assassin. Meanwhile, Marcus has an informant that they are going to meet. Considering Marcus stays out of things for most of the movie, and the movie needs him for comedy, it gets it from moments like this, where a meeting with an informant leads to Marcus having to drop the baby off at the spa where his wife is getting a massage. Later, Marcus is brought in to approach a hostile witness in his home, for questioning, and Marcus’ approach, “I’m gonna penetrate his soul with my heart,” doesn’t exactly work.

a number of attempts to catch Armando don’t work out so smoothly (there’s a botched garage desk and then a botched club party raid,) but one thing does come out of all of it. Mike is able to figure out who Armando is. That leads to him going to Mexico City for the final showdown with the killer. When you think about it, this movie uses the formula of a serial killer movie to and reworks it as a buddy cop film. First, the characters need to figure out who the killer is (and spend most of the movie doing this.) Then, once they know who he is, they still need to catch him.

Something big happens to one of the characters, which is impactful enough to bring Marcus back from retirement. And suddenly, he, Mike, and the entire AMMO team are down in Mexico City. And why not? The bigger the better when it comes to a climax. The setting here is an old Church with spiral ramps going up its walls that make it look like the Guggenheim Museum in NYC. Set at night, with a helicopter hovering over the glass ceiling above them, the setting is pretty terrific. And the climax is fun. It nicely ends a very entertaining movie. At the end of the day, this one does what it see out to accomplish. It’s nothing great, but it does breathe some new life into the franchise and get audiences interested again. There will be more Bad Boys films. They’ll probably never be as good as the first one, but that’s okay. It’s from a different time. Hopefully the next installments  continue off the positive momentum from this movie, and just keep getting better.