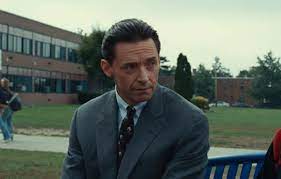 Probably the best HBO Original movie, this one is black comedy intense and really develops it’s story of corruption brilliantly in the way it lets things unfold.

Bad Education is a pretty impressive movie about a corruption scandal that took place inside of a prominent school district, and the characters who perpetrated it. The story itself is fine, but it is a way that this thing is untold and how each new twist and turn is delved out that make the movie so special. That and the dialogue, which is incredibly rich here. Both Hugh Jackman and Allison Janney are giving fantastic performances in this movie, but it’s the writing that really makes this thing. Just watch how in three quick scenes Jackman convinces everyone to bend towards his disposition and turns an entire situation around after that first corruption situation is discovered. The movie is menacing and devious in all the right ways, which means these are characters who we like and are on board with, and so when it turns out they are doing awful things, it hurts way harder than one might have expected. It all makes for a pretty fantastic film.

Talk about a powerhouse of a movie, Bad Education is the thriller about corruption in the education department of a prominent Long Island school district (Roslyn,) that does it all. The movie stars Hugh Jackman and Allison Janney giving the performances of their careers. And I know Janney won an Oscar for her role in I Tonya, for which she was pretty great, but she’s even better in this. In that movie, she was a more interesting and unique and demented character, taking abusive to the next level, but in this one, she seems more like a real living, breathing person. Both her and Jackman really nail this one, and so does Ray Romano for that matter, despite his somewhat limited screen time. For everyone to be this good in the same movie, it’s clearly the writing. They have all been given great material to play with, and they know exactly what to do with it.

So, why is this movie and this material and writing so good? Because it tells a story we haven’t really seen before and it does so in an absolutely gripping way. We haven’t seen movies about school corruption (other than say, cheating on a test,) probably because most studios feel there’s not enough of a fascinating or big event story there. When you think about it, one of those movies about high school students cheating on a major test was also an HBO movie, called Cheaters. Clearly HBO is interested in telling these modest budget, real but scandalous issue movies. Regarding other films we’ve seen across the board, the closest thing to this one is the Hayden Christiansen movie Shattered Glass, from nearly two decades ago (2003,) about a magazine reporter who made up stories, sources, interviews, and quotes. That movie was also compelling. There’s something about watching a movie through the eyes of the villain. Both Shattered Glass and Bad Education handle this point of view approach perfectly.

In Bad Education, the stars of the movie are the superintendent of Roslyn schools, (Frank Tassone, played by Jackman,) and the assistant superintendent of Roslyn Schools, Pam Gluckin (Janney.) But there are many more players on the table here, including not just great featured characters, but really the whole town. You hear all the time with movies the statement that the town or the city is a character itself. This really just means that the movie is soaked with atmosphere, and goes to great pains to bring the audience in and allow the audience to experience the surroundings of these people. Here, in Bad Education, it is absolutely a true statement. Especially in the first half. From the homes to the discussions about real estate, to the book clubs, this is a movie about a community.

And unlike a lot of other movies, this one doesn’t grab your attention right away or do anything to give away what might happen, where this thing might be going, or anything else. There’s no flash forward to a scene or moment that will come later on, in order to make the audience interested and curious. Instead, this movie very cleverly doesn’t want us thinking about where it’s headed. It knows that the money is in the surprises, and so it keeps those all very close to the vest. Instead, it begins with following Tassone around during his usual routines, spending time at the school, checking on different students, parents, and staff members.

Tassone meeta with the parents on the school board, (including Bob Spicer, played by Romano.) He meets with his assistant superintendent for lunch on the bleachers. He even meets with a disgruntled parent who thinks her kid is being treated unfairly by the teacher. And he meets with Rachel, a student doing an interview for the school newspaper who thinks she is just writing a “puff piece,” until Tassone tells her the article can be anything she wants it to be, and that only she can decide whether it’s just a puff piece or not. We see how busy he is, and we also see how involved he is. Clearly this is someone who is very good at his job, and is an important part of the community. He even goes to bookclubs with the mothers in the neighborhood, where he is the only man there and is really the one leading the conversation. Like Pam tells him one day when he’s considering not going to one of those, “the women you see there adore you and each one you talk to ends up calling twelve more to tell them about it.”

Things start to first get interesting when Pam is throwing a party at a house she owns in the Hamptons, and her niece, Jenny, approaches her. Jenny wants to speak in private, and when they get the opportunity for that conversation, Jenny asks to borrow some money. Just enough to buy a Sony Play Station video game console for her son. Nothing extreme. And Pam tells Jenny to use the school credit card and that it will all be straightened out. She tells Jenny that she does this sort of thing all that time, and that if Jenny gives her the receipt, it will be taken care of. Jenny doesn’t especially love this idea and would prefer for Pam to lend her the movie, herself, from her personal account, but Pam tells her niece that this is the way they do things, and Jenny goes along.

This is just the tip of the ice berg. It’s the first clue that something might not be quite right. Uncomfortable clicking kind of music starts playing indicating that the balls are being set in motion, the first piece of the puzzle has been dropped, and we are ready to really get into it. From here, we follow Frank on a trip out west, to Las Vegas for a conference. There’s another surprise dropped there, and this one has nothing to do with the Pam thing, and is certainly not one you could have seen coming. There’s more where that came from. In fact, the movies strategy is to give us bombshell surprises when we least expect them, keeping us off balance at all times. And it most definitely works.

Getting back to Pam’s story, when her novice contractor son orders too much material at the same store, and charing it on the school account, it gets noticed by someone who works at the store and is related to Bob’s wife. The employee calls Bob while he’s on a golf course and asks about the order. Materials like shower heads are being purhchased and charged to the school. When Pam shows up to work the next morning, there’s a meeting going on in a private office next to hers, with the parents on the school committee, to decide what should be done. Pam has just been caught with her hand in the cookie jar and Frank is brought in, as the sort of fixer, to handle the problem. He talks with the parents, then leaves them to discuss the situation with the school accountant.

Watching him work his magic over both this accountant and then the parents is a thing of genius. When he goes in to see the accountant, Phil, the man is a mess and freaking out about how he is so screwed for not catching this. Tossone immediately makes Phil feel like he’s in charge (he even has Phil repeat it,) and explains what they are going to do about the situation. He tells Phil that Pam is their friend and she made a mistake, nothing more. Then he brings the idea of how this scandal can hurt both the kids college admissions and real estate value of Roslyn homes to the board, and again convinces them to do exactly what he has in mind. The final meeting he takes is with Pam, herself, and this time Tossone brings all the parents in with him. This meeting, too, is quite amazing. Frank starts by building her up, telling her what a great job she has done and how they are all appreciative, just to tear her right down. It’s very impressive.

Pam leaves and that closes the book on the first half of the movie. There’s still a whole other half left, and that newspaper reporting high school student, Rachel, is digging deeper and deeper on a story she had a hunch on that just keeps turning up new fascinating revelations. There’s a great surprise that happens when Rachel ventures into the city looking for answers. And the movie continues to unload on us, leading us down darker and more sinister alleys at all times. If Tossone is the protagonist or hero of the first half, then tables turn and Rachel becomes he hero of the second half. And the movie does it all by using a combination of bombshell surprises and fantastic conversation scenes. Those three in a row with Tossone at the time Pam’s secret was discovered were flawless, but another great one comes when Tossone and Rachel sit down together, after her trip into the city. It’s the kind of scene most movies wouldn’t dare to give us. They would hint at it, and have the characters approach each other, only for a deaux ex-machina, like a fire drill alarm, being used to get them out of it. Not this movie.. Bad Education goes for the guts every chance it can get. Even after the villains are brought down, the story still continues to show us all of the consequences. And we eat up every minute of it, wanting this thing to keep going and wanting to learn as much as we can. It’s just that gripping and well-made of a movie.