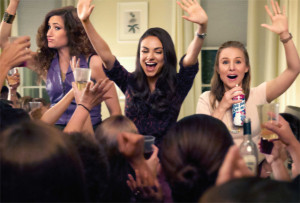 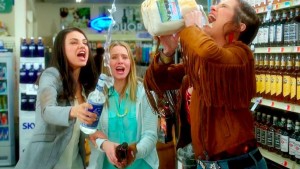 The best female comedy since The Heat, this one is what Sisters should have been, and works because of both how simple and yet funny it is.

A pretty funny movie about a woman who finds herself incredibly frustrated with the world. Amy (Mila Kunis,) has had it with her husband, her jobs, the other parents, and her spoiled kids. After everything comes crashing down on her during the course of an awful day, Amy picks herself back up and targets the system that’s been keeping her down. The humor level puts it in the same category as something like Bridesmaids. This movie is both smart and funny. Amy’s attitude about bring bad, and just not caring, is like something out of Office Spade. And with R rated humor, there’s s lot to like here.

Bad Moms is the first movie in a while to get this sort of thing right. Female led comedies just don’t get made that often, and when they do, they’re not usually very funny. There have been three good female led comedies in the last five years, (Bridesmaids, The Heat, and Trainereck,) and only one was about a group of women. That’s because,  more often than not, these movies just don’t work, (Sisters, the Ghostbusters reboot.) They allow themselves to walk into cliched plots, hoping to just be funny, and the truth is, they aren’t. Real humor takes intelligence. Real humor is the kind of thing that can be funny regardless of whether the characters are male of female. These movies about characters who have no shame and take the world by the balls are all basically reincarnations of The Hangover or Old School, and that’s okay. Its not a male or female thing, it’s a humor level thing. Bad Moms knows that. It’s a movie that puts comedy first, every step of the way.

The movie is about a working mom (Amy, played by Mila Kunis,)  with two children and a terrible husband. She lives in the kind of wealthy area where most moms don’t work at all, and instead stay home and do everything for their kids. The mom’s are so devoted to living through their children vicariously, that they actually use their children’s accomplishments as a means to one-up each other. Christina Applegate plays the Queen Bee of evil, in the form of Gwendolyn, the PTA president. She’s constantly surrounded by two cronies (one of them is played by Jada Pickett Smith.) The three of these women gossip about other parents and pass judgement as if it’s s bodily function.

Now if the movie was just about anger against these uppity, annoying, superficial moms, it would not have been very good. In fact, it would have been very simple-minded and one-noted, and just like every other lousy movie out there. What makes Bad Moms special is that it is about so much more. It’s about being angry with society and about a whole state of being. Call it the Office Space of suburban family life. Amy has a whole list of problems and frustrations, and most of them are pretty funny.  These include the bad husbands who don’t help out at all, the jobs where everyone is young and shows no work ethic or initiative, and the kids who feel entitled. In Bad Mom’s, Amy lashes out against all of these things.

She’s got the help of two friends who she meets early on. It might be a cliche that everything happens all at once as soon as the movie starts, (Amy finally stands up to her husband, she makes friends with women for what seems like the very first time,) but we can look past that and appreciate this movie for what it gets right. Which is quite a lot. For example, most movies would have the lousy husband realize the error of his ways during the course of the film and come back to Amy a new man full of hope and promise. Not this movie. This one’s not afraid to be realistic and call a spade a spade. There’s no happy ending, saving the marriage, for these two, and the movie doesn’t hesitate to show it.

The other women Amy meets all show up at a bar after Amy tells off Gwendolyn in front of a packed auditorium, parents association meeting. She has just had a very long and painful day, filled with running around spilling things all over herself, burning herself in the face with coffee, slamming her side-view mirror into a parked car, carrying a sick, heavy dog around in her arms, and being tackled to the ground by a kid on a soccer field. Now she gets to the meeting late, and Gwendolyn puts Amy in charge of the bake sale. That’s when Amy goes off.

At this point, there have been two major acts of the movie. The first was the introductions, where Amy took us through a typical day of hers, using voice over narration to help guide us along. That first act ended with the husband-porn-cheating situation, and the second act began with Amy’s first day without her husband, now having to do everything for her kids. And that second act ended with the parents meeting.

From here we get the women meeting at the bar, and the first of the great montages. It’s the supermarket scene, played to the sounds of the kinetic song, “I Don’t Care.” These girls run wild through the aisles, tearing apart cereals and dumping the boxes into their mouths, making out with the clerks, splashing alcohol everywhere, chasing down a security guard, and throwing bills at the cash register guy. The montage is fantastic, and it’s just the first one. It untilizes slow motion to really bring out the comedy.

If the first half of the movie is about making my friends and just getting by, learning to survive, then the second half is about taking over. This is where Amy runs for president of the Parent Association and targets Gwendolyn’s reign, head-on. This is the part of the movie where we get a few formulaic cliches, (the planting of drugs in a locker, for example,) but the movie never loses its comedic edge. We still get great montages (this time it’s a house party scene,) and fun new characters (the principal, played by Wendel Pierce from The Wire.)

There are some problems to this movie, but they are small and mostly unimportant. Amy’s first meeting the women who become her new group of friends at the start of the film nskevit seem like there was no one in her life (other than her husband and kids,) before the film began. Compare that to, say, Trainwreck, where we meet Amy Shumers best friend-sister, her best friend- coworker, and also her father. Bad Moms could have used mor of that (at least a parent in the picture, or the mention of Amy’s parents.) And then there’s the way the whole climax works, operating at a very basic level. But by that point, this movie has already won us over, a long time ago. It’s the humor that really works, more than anything else. Mila Kunis has never been better, and Katherine Hahn as the crazy friend, (think the Hangovers Alan or Old Schools Frank the Tank, or even Melissa McCarthy in Bridesmaids,)  knocks it out of the park. This movie finds the right jokes, tone, and delivery to really work.