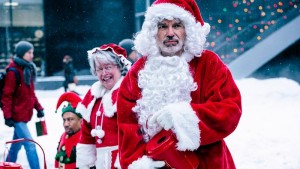 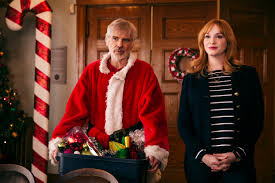 The best thing that can be said about this movie is that it’s watchable, meaning the humor and characters are enough that you can get through it, if your tolerance for nothingness is hot enough.

There’s not a lot to like about this one. Bad Santa 2 is a lame attempt at cashing in the cult status of the first movie which found success in the form of a following, after the movies home video release. Billy Bob Thornton’s character, Willie, became a staple of modern cinema to the point where tons of other movies and characters have been patterned after it. Thornton, himself, as played the same sort of role in other films handful of times now, (School For Scoundrels, Mr. Woodcock.) But Bad Santa, the first film, remains the best of the bunch. It’s such a shame then, that the sequel has nothing creative to offer. The jokes are mostly not funny, and the plot goes in no new or interesting directions. There is one decent character, a female security guard, who gives us a couple of laughs, but other than that, this movie has nothing to offer.

The thing about Bad Santa 2 is, there’s really nothing to it. Nothing redeemable or worthwhile, or in any way impressive. The movie is tolerable and watchable in a way where you know you are watching crap, but still, every once in a while there’s something just a tiny bit funny, but otherwise, this movie is kind of a waste. It’s a missed opportunity of a sequel to a movie that single-handedly started a trend, and now has become a sort of parody of itself. That trend is the “Bad,..” movies. There have been a bunch of them at this point, (Bad Teacher, Bad Moms,) and it all started with Bad Santa. This was the first of its kind, meaning black comedies where the protagonists take the term “antihero,” to the next level of degradation. The protagonists are so uncaring and unconcerned with society or anybody else, that the only thing we, as an audience, can do is laugh at them, (we certainly can’t root for them.) These are characters who are willing to do terribly mean things without ever batting an eyelash and Billy Bob Thornton, playing the character Willie in the original Bad Santa movie, nailed it.

But now the sequel is out and there’s nothing new or interesting about it. Instead of a department store toy section, Santa is working for a charity organization. Instead of Bernie Mac and John Ritter as the supporting players (both actors have passed away since the first film,) we’ve got Kathy Bates playing Willie’s butch mother. So we didn’t exactly trade up. The character of Willie is still great, but the storyline he is thrown into is pretty much paint by the numbers and not the least bit creative at all. This movie was made because of the character and the cult following of the original film, and for those two reasons alone. It most certainly was not made because they had a good story to tell.

The film includes a whole lot of sameness to the first film, and not the good kind of sameness that you want to see in a sequel to remind you of the original film. This is more like the kind of sameness that comes from a lack of new ideas. For example, the boy who was an overweight little kid in the first movie, named Therman Merman, returns here as a twenty-one year old who is just as dopey as he was when he was a boy. Therman still looks the same and is all about fixing sandwiches, (his sort of catch phrase from the first movie,) and he still has no idea what things that Willie says to him mean. This kid is either mentally challenged or has been living under a rock his whole life. Case in point, he asks Willie to pop his cherry. It’s more annoying than it is funny.

The sameness also includes a woman who goes for Willie for no good reason at all. This woman is Diane, the terrific Christina Hendricks, who proved to be a fascinating actress on TVs Mad Men. Here, Hendricks is given nothing to do other than be a routine character who does ridiculous things for the purpose of shocking the audience. She is supposed to be a wholesome good girl, and then she goes and has sex with Willie behind a dumpster in an alley. There’s a very funny moment when the two of them are in a car together, long before there’s anything between them, and Willie just comes right out and says what’s on his mind about her, being completely blunt. He basically says what he wants to do to her. And she throws him out of the car, totally offended. This moment was great, because you rarely see characters be so open about things, and if you do, they don’t usually get rejected. And then the moment is cut short, because the movie can’t have Willie get rejected. It just can’t be that smart. And so Diane drives up behind him and she tells him to get in. What a wasted opportunity for a joke that was almost there.

Marcus, The black elf-playing partner of Willie’s is also back, and he and Willie spend most of the movie trading insults with each other. Some are moderately funny, but most are not. And it just feels like back and forth one-liners with little intelligence put into anything these guys say. This movie throws around the P word, for example, as if it just can’t think of anything else to say sometimes. In an age where we have seen great movies filled with characters insulting each other, making humorous references to things in pop culture, (like the characters in Judd Apatow movies do, often played by Seth Rogen and Paul Rudd,) it’s kind of sad to see how little this movie has thought up for its characters to say. It isn’t even in the same sandbox or anywhere near the same sandbox as those other films.

One of the few, (in fact, quite possibly the only,) likable characters in the movie is a female security guard. By likable, what I mean is somewhat funny. This woman is overweight, and over-sexualized. She is all about getting it on, and has a sort of warped set of standards. At one point, we see her swiping left and right on tinder, and the guys she’s rejecting are the good looking ones. The guys who look like nut cases are the ones she is interested in. This security guard goes on a date with Markus at one point and completely rejects him because of his size, but not until after he has payed for everything and the date has come to an end. If there is any glimmer of a creative or interesting or fun character in this movie, the female security guard is it.

But this isn’t even close to enough. Not in a movie that revolves around one cliche after another. Willie’s mom is basically another version of Markus, which is to say just another character for him to trade insults with. And Kathy Bates’ stories about Willie when he was a kid aren’t very funny at all. Willie runs into her at the charity, doing the same exact thing as he’s doing. Apparently she taught him everything he knows about scamming and pulling robberies around Christmastime. And now, the three of them, (mother, son, and Willie,) are going to work together to rob the charity. That’s about the extent of the plot.

It’s tough to say what would have made this movie better, other than a more creative story and some stronger humor. One consideration, however, is if the supporting players were stronger. This movie has no real villains, for example. It’s got the usual cheating boyfriend role, for the guy who Diane is with, and the movie doesn’t really do anything with it. And this boyfriend, as well as his top security guy, are supposed to be the villains here, (simply because they are after our heroes,) only these two guys never do a single thing to make them villains, (other then that one brief moment of cheating on Diane.) But the story of she and this man (who is the one running the charity,) together, as a couple, is thrown to the wind about halfway through the film. There’s no resolution or ending to that story, and it’s as if the movie forgot about that strand altogether.

Aside from being limited on plot, this movie is also limited on humor. Still, every once in a while, a little decent laugh or two does manage to sneak in. For example, there are two scenes where kids sit on Willie’s lap to ask Santa for gifts. One of them works, the other doesn’t. The one that doesn’t work involves a girl peeing on him. The one that does has a kid sitting on his lap asking for tons of video games, specifying each one, and continuing on and on, despite Willie blatantly telling the kid his doesn’t care. It’s the responses of this kid and how he just keeps on going, that make the scene. But for every one of those there are about ten stupid scenes with characters doing things for no understandable reason at all. At the end of the scene with the first kid who urinates on Willie’s lap, for example, we get a scene of the bartender from the party doing some things in the bedroom to Willie that defy explanation. Again, it’s this movie going for the wow factor instead of the believability factor, and it’s a bad choice.

Bad Santa 2 is a lousy movie. In fact, it is barely watchable. The humor and plot are both at a level that is far below where it was in the original film. Most of the characters are walking cliches with nothing interesting to say or do. Luckily the humor is still dark enough that once in a while the movie is able to find a joke that works simply because of how ridiculous the situation is. Out of the many uninteresting characters in this movie, the female security guard is the only one worth watching, and she is the very definition of a supporting, background character. She’s not a hero or a villain, but someone who is just there. And that’s the best this movie has got going for it. With lousy writing and a desire to just cash in on the craze of movies that have taken the idea of the first film and run with it, (Bridesmaids could have easily been called Bad Bridesmaids, for example,) Bad Santa 2 is pretty much a mess.