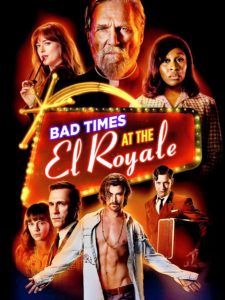 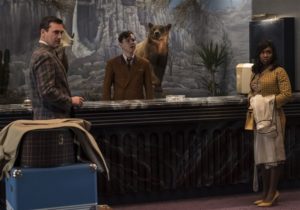 A movie packed with good ideas that just doesn’t have what it takes to carry this thing all the way.

There’s a fantastic first half here. Sure, it feels a lot like a Tarantino film, which is no doubt intentional, but it also has a mind of its own when it comes to plot. The style is all Tarantino, but the story about a hotel with some deep dark secrets and a bunch of strangers who find their lives entangled together there, is pretty good. In the first half of the movie, we get all kinds of secrets, surprises, and even a scene that is shown from three different points of view. It’s fantastic. But then the second half basically swaps one character for another, (one leaves the movie and then another enters it,) and suddenly things stop working. It’s not that the new actor or character are bad, it’s just that the story has run out of surprises and creativity. Suddenly everything is straight forward and routine, and all the tricks this movie had up its sleeve have been let out of the bag.

The first thing to note about Bad Times at the El Royale is just how much it wants to be and feel like a Tarantino movie. First of all, the whole thing takes place in one hotel during one night, (think Four Rooms meets The Hateful Eight.) We are of course talking about a bunch of strangers trapped together, just like always with these kinds of movies, but there’s a lot more going on here than that. There’s the idea that we see scenes over and over again from different characters’ points of view, (Pulp Fiction, Jackie Brown, The Hateful Eight.) There are also title cards used for different rooms or chapters of the movie, (a Tarantino trademark.) And finally, there’s the name of the hotel itself, which is so essential it makes up much of the movies title. The El Royale. Think of it as a combo of the name El Ray (used in From Dusk Till Dawn and Planet Terror, two movies Tarantino helped with,) mixed with the famous Pulp Fiction quote, “a Royale with cheese.” This thing has Tarantino references all over it, and that is most definitely not a bad thing.

But Tarantino actually had nothing to do with the movie. Instead, this is the film of another super promising director, and one who has got a career trajectory all of his own. Drew Goddard is this man at the helm. He’s a director who has only made one movie, Cabin in the Woods. But what a movie it was. Talk about creativity. Talk about being a fan of horror and applying the standard tropes to a very unconventional story. Cabin in the Woods is a knock your socks off, as clever as it gets, action packed horror movie. And many people have been waiting around for some years now, to see what Goddard would do next. That turned out to be writing the Daredevil TV series for Netflix, which was terrific. And his follow up movie, some seven years later, was this. If Cabin was his tribute to horror movies, and Daredevil his tribute to superhero fare, than this is his crime / homage to Tarantino. And who better to emulate?

The movie starts off with a priest and a black woman in the parking lot of the hotel. The priest is Father Daniel Flynn, (played by Jeff Bridges.) The Woman is Darlene Sweet, (played by Cynthia Erivo.) She notices that he looks lost and helps him into the lobby. Once there, they meet a third guest, Laramie Seymour Sullivan, (John Hamm,) who is waiting for the hotel clerk. All three guests now proceed to wait, making idle chit chat and wondering where the clerk is as they continue to ring the bell. If this brings to mind Barton Fink,  by the Coen Brothers, then it’s just a reminder of how the great filmmakers like to tackle this  noir-hot genre (James Mangold did it as well with the movie Identity,) and how Goddard might just be the next one on the list.

When the clerk, Miles, does show up, there’s a lot of talk about how Laramie wants the honeymoon sweet. He talks it up like it is something to marvel about, and then the room turns out to be nothing special at all, (which does make sense, when you learn why he really wants the room.) But the talking it up, definitely has that Tarantino flair. And so does the hotel itself, which sits right on the border of California and Nevada, so much so that half of the hotel is in each state. This idea we get to hear a lot about, first from Laramie and then from the clerk himself. But the question is always the same… what’s the difference between the two sides.

If only the answer were a little better. If there were different amenities on each side of the hotel, and you could only use them if you were staying on that side, it might have been interesting. Like if one side had a pool and rooftop and the other side had a bar and movie room, or something like that. Think choices and having the characters weigh the different choices when making a decision, evaluating the pros and cons of each. A little like Bruce Willis trying out all different weapons in the pawn shop of Pulp Fiction, trading a hammer for a bat for a chainsaw for s sword. But in Bad Times at the El Royale, that doesn’t happen. The amenities are the same, and the only real difference is the cost. In other words the setup is great, but the payoff falls apart.

To a certain extent, that situation is symbolic of the entire movie. The first half soars pretty smoothly, and is full of twists and surprises, but the second half finds itself out of ideas. At least out of good, creative ones. When our characters go to their rooms, we follow Laramie, who sets his stuff down and then gets to work removing surveillance bugs from all over the room. He works for the FBI, as we can tell from a phone call he makes to J. Edgar Hoover, and he has been sent to this room to get rid of all FBI surveillance equipment. Only he finds more than he was expecting. Apparently the FBI wasn’t the only ones bugging this room.

Laramie’s curiosity gets the better of him and he follows some wires into the wall units. This leads him to discover a secret hallway behind all of the rooms with two-way mirrors looking into each room. This is a trademark from Cabin in the Woods, and Goddard uses it well in both films, to show an underlying secret of people up to something more then they appear to be. As Larame walks down the hallway, he sees Father Flynn tearing up floorboards in his room, Darlene using the room for some nostalgic singing practice, complete with wall paneling she setup herself, and a third room where Larame witnesses a kidnapping.

In that third room, we have another hotel guest, Emily, (Dakota Johnson,) who has kidnapped a girl and has the girl tied to a chair. We now start moving beteeen stories. We follow Father Flynn until someone knocks him unconscious with a bottle upside his head. Then we go back to Larame and watch him attempt to stop the kidnapping and run into something even more unexpected. The scene ends with a gunshot through the two-way mirror. And then we cut back to Father Flynn’s story to see that gunshot situation from another angle. This time Father Flynn and Miles are exploring the back hallway when they gunshot goes off, and a new twist is added to the mix. This is us seeing the same sequence from a completely different angle.

And then we see it a third time from the point of view of Darlene. We pick up with her after Father Flynn has been struck, and follow her into the parking lot where she tries finding a car that will start. Only none does because Larame has cut the engine wires on each one. And we watch her witness what happens when Larame tries to interfere with the kidnapping. At this point we’ve now seen the gunshot situation from three different angles. We’ve seen it up close, (when Larame kicks down the door,) we’ve seen it from behind, (from the hallway behind the mirror,) and we’ve seen it from in front, (from the parking lot outside the front door.) This is all incredibly cool. Unfortunately, the fun stops there. Following the third point of view situation, the movie enters into it’s second half, with the emergence of a new character. This is a cult leader, named Billy Dean, played by Chris Hemsworth, and his character dominates the second half of the movie as a villain. The problem is, once he shows up, the twists and creativity pretty much end.

Once Billy Dean arrives on the scene, the movie takes a pretty straight forward, linear approach. And that’s exactly the opposite of how things were going so far. What started as a fantastic first half comes crashing down in the second. It’s not that things are terrible here, but just that there’s no sign of the things that made the movie so special from earlier on. Here’s an example… in the first half, every character and what room he or she is staying in is carefully calculated and delicately setup. We are able to keep track of the numbers of each persons room. That’s how detailed the setup is. But in the second half, Billy Dean shows up with four guys, and we don’t even see their faces or learn their names. All of a sudden, keeping track of characters is no longer a priority.  And so we are left with a fantastic first half and a just okay second half. Considering that movies are supposed to be the opposite, meaning build up to something and save twists for the end, it’s hard to not feel slighted when you realize that the movie was dishing out everything it had in the first parts and leaving nothing up its sleeve for what remained. And so, we are left thinking about the first half, and what made it so unique. There was the secret hallway that spied on each room, the cutting between stories and then picking up again with where each story left off, and of course, the scene shown from three different angles. All great stuff. If only there was more of it in the second half.