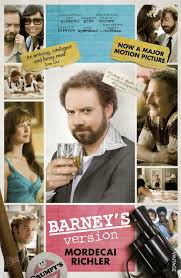 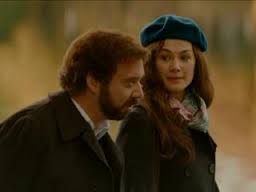 A fascinating picture about a rather selfish man’s devotion to the woman he loves.

Barney’s version was a pretty cool movie, mostly because it was something different. It tried to combine a lot into one movie and make it have an almost epic feel (which isn’t the easiest thing to do with a romantic drama), and it did all this with great success. that’s because it told the story of one man’s life, from his relationships as a young adult, all the way to his old age and filled the story not only with romantic twists and turns, but also with a subplot of murder and mystery. definitely a lot for one film. definitely the reason why this movie rises so high above all the others that want to be only a romance.

the movie began with Barney (paul giamatti) as an older man at a bar. he was talking to another man (mark adday) who had just published a book. and the book was all about Barney and the possible murder that he might have been involved in. that’s all we got on this topic for now. it was a brief introduction to what was to come and it was enough to wet our appetites and send us off wanting more.

The movie then took us back to Barney as a young man living in rome, eating and drinking as he pleased and living the good life. he had a beautiful, rebellious woman at his side, and all seemed great until she announced her pregnancy. the two of them rushed off to get married, had the child, and then found out the truth about the baby. This whole rome section was like a short story. it was like a chapter from a novel.

Barney returned to the states, now a little older and a little wiser, to begin a relationship with minnie driver. this actress used to be america’s sweetheart. at least for a small time in the nineties. her breakout was of course good will hunting, and she really seemed like a rising star leading up to that film with roles in movies like sleepers and grosse point blank. but somehow, after good will hunting, she kind of fell off the grid. Barney’s version gives her a significant role to show us that she’s still around and as lovable and cute as ever.

except, not to Barney. he gets set to marry her, only something’s not right. for one thing, he can’t stand her father. Barney’s father, played hilariously by dustin hoffman as an elder jewish man who is unaware of other people’s perceptions of him, completely disgusts minnie driver’s father. it gets so bad that at one point during Barney’s wedding to her, driver’s father (who is paying for the whole wedding), tells the bartender to cut both Barney and his father off from drinking anymore. this sets Barney off, feeling that this man is not only disrespecting him, but disrespecting his father.

but something else happens at the wedding too. Barney meets another woman. it’s his own wedding and he meets another girl there and falls in love instantly. that’s the reason i wanted to see the movie to begin with. just that idea, that you’re never sure until one day true love just appears out of nowhere like a bolt of lightning and bangs you over the head. and it could be at the worst possible time. this movie is about that situation.

Barney starts pursuing this woman, Miriam, despite being married to driver. he sends flowers to where she works every week, and it’s only a matter of time before driver finds out. she retaliates by sleeping with Barney’s best friend, who has a “who cares,” kind of attitude. and after driver leaves and it is just the two men left in the house, Barney takes his buddy out to the lake and possibly shoots him. if it happened, then it happened by accident, with Barney tripping and the gun going off. and then Barney must have covered it up. but we don’t even know if it happened, and that’s part of the fun of the movie.

there is a police investigation, which brings in mark adday as the lead detective who has a hard on for busting Barney. this guy seems willing to play dirty, and it’s likely that the only reason he doesn’t attempt to plant evidence at the scene or do something unprofessional is because Barney’s dad, an ex-cop himself, is hanging around the scene, watching every move adday makes.

The separation with driver might have led to a dramatic situation (either the death or the disappearance of Barney’s best friend), but at the same time, it frees Barney up to now pursue Miriam in a way where there might actually be a future. and there is. she’s the love of his life, and it isn’t long before they’re together.

only the movie keeps us in flashbacks, going back and forth from the present to the past, so that we know from the present state of things, with Barney as an older man, that things between he and Miriam aren’t so great. we know that she is with someone else and we even know his name, so that when he appears in the movie during a flashback, we know that this is the character who will impact their lives. it’s clues like these setup in the future to give us a hint at what’s to come in the past, that make this movie so special. not only is it a powerful story filled with humor and mystery, but it’s also an epic love story. this movie was pretty great. romantic comedies and dramas today seem to all be telling the same story. the girl doesn’t want a relationship and the guy does. be it the natalie portman movie, No strings attached, the jake gylenhal movie, love and other drugs, the justin timberlake movie, friends with benefits, or even the adam sandler movie, just go with it, these films are all more or less the same. Barney’s version is the movie that finds a different approach to romance. it’s the one movie in the pile that is really worth seeing.