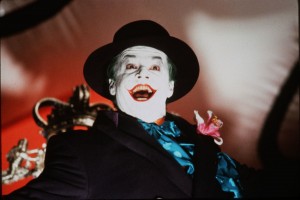 A stylistically masterful film, this one finds the perfect combination of dark and playful to tell this story just right.

Perhaps the best Batman movie there ever was (although Batman Begins is also pretty great,) this is the movie that really gets just about everything right. First and foremost is the tone and setting, which masterful director Tim Burton, really nailed here, and did so by taking chances. He also got some help from composer Danny Elfman, who delivers one of the best scores of his career with this movie. And then there are Michael Keaton and Jack Nicholson, both going to great pains to get their roles perfect. Nicholson, in particular, is the standout. He is clearly just right for the role, combining the humorous and psychotic with the scary, dangerous, and threatening. Tim Burton captures just about everything right here, including the action. There are some minor flaws that start to come out in the final acts, but nothing that can even come close to touching the greatness of this film.

Tim Burton is a truly visionary director, and other than the Richard Donner Superman movies, he’s the first one to really begin making superhero films. Hiring Burton to do this was an odd choice. He is one of the few directors out there who never seems to compromise his style and strange, but fascinating take on the world. This man was was all about dark and creatively bizarre. Warner Brothers took a gamble by hiring him, but boy did it pay off. At the time, Burton although he had only directed a tiny handful of filmst. He had made Pee Wee’s Big Advenure and Beetlejuice. That’s it. Between the two of those films, it is clear that Beetlejuice is the one that got him this gig, with it’s dark and outrageous premise. With Batman, Burton brings that same kind of tone into the world of Gotham, crime, and masked vigilantes.

Batman opens by putting us on the streets for a pretty scary scene, right away. We follow a boy and his two parents away from a theater, where they try to follow a map and figure out where they are going. After they have no luck getting a cab, the three of them head into a back alley, where a mugger jumps out and attacks. Now we follow the mugger and his friend onto a rooftop where they go through the wallet of the man they just attacked. That’s when Batman shows up and takes these guys down. It is the perfect scene because it is quick, spooky, and whatever dialogue there is, talks about the legend of the Bat, and what people are saying about him on the streets.

From there, we head into the world of organized crime. There’s a criminal named Jack Napier (Jack Nicholson,) who is the right hand man to Gotham’s crime lord Carl Grisam (Jack Palance.) Napier is also sleeping with Grisam’s woman, and is under the belief that Grisam knows nothing about it. We meet Jack as he is sitting around his office, playing with a deck of cards, and straightening his tie. We learn from his dialogue with this girl, Alicia, all about the Grisam love triangle. What we get from the scene is that Jack is a real piece of work, over confident in his disrespect of the boss, and totally unfriendly to Alicia. From here, we watch him deal with a corrupt cop named Eccart, and even threaten the man. That scene works out nicely by bridging the scene of the Batman mugger attack together with that of Napier. At the start of the scene the muggers are being taken away and Eccart is taking down the report. Then he walks into an alley to meet Jack.

We transition from this scene into that of the reporters by following Alexander Knox, (Robert Wuhl,) who is the only reporter pursuing the story of the Bat. All of the other reporters in the newsroom laugh at him and make cartoons about this giant Bat, but Knox is not deterred. In fact, he is approached by a new photo journalist, Vicky Vale, (Kim Bassinger,) who is sitting at his desk, waiting for him, and wants to puruse the Batman story alongside of Knox. Her pictures, his words. Plus, she’s got a card that might help him get an interview with the police commisioner. She has an invite for two to the Bruce Wayne charity event, to be held at Wayne mannor, where Commisioner Gordon is sure to be in attendance.

All of this works nicely with establishing characters. Burton does a fantastic job of allowing us to follow characters from one scene into another, and this gives us some very smooth transitions. What also works nicely is how much detail Burton gives to the underworld. We not only meet Jack’s boss, Grisam, but also this corrupt cop, Eccart, who is on Grisam’s payroll, and thinks Jack is a nutcase. When Grisam sets Jack up on a mission to a chemical plant, and then calls Eccart in to take Jack down, we get our first major event of the film. Batman arrives at the plant too, and a shootout leads to Jack taking a nose dive into a vat of chemicals that will lead to him turning into the Joker.

That first portion of the film is fantastic. It goes a long way that we get to spend time with Jack before he turns into the Joker and see what life was like for him beforehand. I also like the way all of these major underworld crime figures are established, only to be killed early on. It lets the audience know that anyone can die, and that big things are happening, even right here, at the start of the film. Burton is a director who knows the importance of details and interesting scenes. He doesn’t rush from one action scene to another, but instead takes his time creating suspense. That’s why we get a scene of Knox and Vale walking through a showroom at Wayne manor, looking over different full size statues that Wayne has collected from around the world, and discussing them. Between the Japanese soldier and the King of the Wicker People, even this small moment is incredibly cool. Burton continues this approach, giving us the small scenes that help fill in the gaps, when he shows us Jack go for his plastic surgery operation, after making it out of that vat of chemicals.

And then we move into the second act of the film and the birth of the Joker. Jack’s face is now pure white, with ruby red lips and bright green hair. The movie goes to pains to show us that Jack can still look normal when he wants, by applying flesh colored makeup to his face, but his true look is now that of the Joker. He shows up at Grisam’s place and blows the old boss away. Then he calls a meeting among Grisam’s rival crime lords and announces that he will be taking over the business. When one of these men objects, Jack puts him in his place by burning the man to a crip.

This act is about The Joker attacking Gotham city while Bruce Wayne and Vicky Vale begin a relationship. The Joker kills another one of those crime lords on the steps of City Hall by stabbing a quil pen through the man’s neck. Then he poisons beauty products in such a way that if the right combination of them is selected, (hairspray with makeup with hair gel, or something like that,) it leads to uncontrollable laughter and then instant death. And with the Wayne-Vale story, the dating scenes are fun (the long table dinner scene,) but even better is the way that the more Vale learns about Wayne, the more of a mystery she realizes he really is.

In the third act of the movie, The Joker enters the romantic game and tries to turn the Wayne-Vale relationship into a love triangle. First he tricks Vale into meeting him at a museum and then has his henchmen tear the place to pieces, before Batman shows up to save the day. Then The Joker shows up at Vale’s apartment, right as Bruce Wayne is there, about to confess who he really is to Vale. This is where the movie begins to get a little sloppy. The way that Bruce avoids taking a bullet and then disappears from the scene is a little too unbelievable.

Unfortunately, the sloppiness continues into the final act. Sure, The Joker parade and poisonous gas are cool, but there are plenty of problems here. The way that the money the Joker is throwing around turns out to be fake, and no one seems to care. The way that Batman has the Joker in his sights, using targeting equipment before firing, and still misses the Joker with every shot. Even the way the Joker enters a Church with Vale, just the two of them, and yet when Batman makes it up there to find them, the Joker now suddenly has four henchmen around to attack Batman. Despite these flaws, the final act is still pretty cool. The gothic Church is a great setting for the climax, and the action continues to be pretty clever and entertaining, the same way it has been throughout the entire film.There’s a lot to like about this movie, including the witty dialogue. Jack Nicholson, in particular, knocks it out of the park as the Joker. You can see how Burton might have known that Nicholson would be right for the part, seeing his turn as a villain in The Shining, some years earlier. And Burton’s tone and style here are absolutely fantastic. Gotham city has never looked cooler. Burton somehow manages to find the perfect balance of playful and dark. A lot of that can be attributed to composer (and long time Burton collaborator,) Danny Elfman, who also really gives this film his all. Even Michael Keaton, who was known as a comedic actor before this film, finds the right approach to play the quiet and serious Bruce Wayne. This is the Batman movie where everyone brings their best work to the table and the results are pretty amazing.