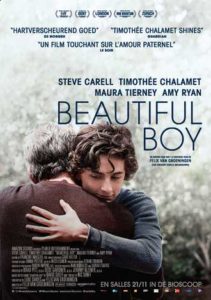 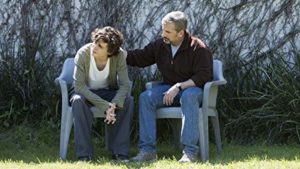 Very sad and powerful, but unfortunately this movie also gets kind of repetitive and doesn’t seem to have many new avenues to explore after a while.

This is a pretty good, yet upsetting movie about the strained relationship between a father and son. The son, Nick (Timothy Chalamet,) is a drug addict. And his father, David, (Steve Carell,) is endlessly searching for ways to help his son. The movie is mainly told from David’s point of view, which means we really sympathize with this character who can’t find anything he can do to make the situation better. It’s a movie that is filled with heartbreak, as David and his family are often left for days with no idea where their son is, or if he is even still alive. The first half is filled with flashbacks, which do add more to the story, but also make the timeline a little confusing. The second half gets a little better, as the narrative is told in a more straight forward way. The only problem there is that by this point the story has become somewhat repetitive. It’s a good movie, and has a tough story to tell. Some of the better examples of these kinds of movies include Requiem For A Dream and The Basketball Diaries. Those movies took the story a little bit further down the rabbit hole of depravity than this one did. Beautiful Boy is more about the relationship than about the individual characters, and on that level it definitely works.

Beautiful Boy is a movie about drug addiction. Only unlike most movies about that topic, this one is specifically about the relationship between the user and his father. It’s about how this boy, Nick, had all the potential in the world and couldn’t help himself from throwing it all away to become an addict, and how there was nothing his father could do about it other than watch. It’s a very sad and emotional movie. This one is definite tearjerker. But at the end of the day, it’s also pretty depressing and not the kind of movie one would want to watch again. The performances are great, but there’s nothing especially exciting that happens in the story, and no major events or resolution of any kind.

At the start of the film, we are with David Sheff, (Steve Carrell,) as he sits across from a man in an office asking questions about the “disease” that his son has. The man thinks he is there to write a story, since David is a free lance writer, but he makes it clear that this is not the reason for him being there today. Instead, he has some specific questions he needs answered. Two of them. What is this doing to his son, and what can he do to help. That’s how the movie opens. From there, we see him and his son having a typical high school kid – dad relationship, which means the son wants to be left in his room, alone, all day reading depressing novels, writing, and drawing, while the dad wants to do fun things with his son, like go surfing.

And then one night, David wakes up and his son, Nick, (Timothy Chalamet,) is nowhere to be found. David calls the police to see if there have been any accidents or if any kids have been brought in. Nothing. There is no sign of Nick, and the family, (including a stepmother played by Maura Tierney, and two small children,) doesn’t hear from him for days. And then one day Nick shows up again, and instead of giving answers about where he’s been, he tells his dad he just needs to get some sleep, and curls up in his bed.

This, of course, isn’t going to work for David. The next day he drives Nick to rehab. We watch as the two of them sit in a car outside, with Nick pleading with his dad not to send him. He tells his dad that he has learned his lesson, and is never going to do it again, but David insists that they go in and see what it’s all about. Then David meets with a woman who works there, asks a number of questions, and eventually pays for Nick to be checked in for a twenty eight day program. And while Nick is there, eating breakfast at tables with strange looking people, his dad is out trying to find answers. We watch David go to experts, asking questions about what these drugs are doing to the boy. At one point, we even see David try the meth himself, to see what is son is experiencing.

All of this is cut with flashbacks. In fact, nearly the entire first half of the movie is filled with flashbacks. While they do help flesh out the story, (especially the ones of Nick as a small child,) some of them get pretty confusing. Those would be the ones that seem to happen around the same time that this current story is happening. What we can tell, early on, is that Nick is done with high school and is in the transition stage between high school and college. And then we get flashbacks to him finishing high school and getting into all the colleges where he applied and things like that. There’s even a flashback to Nick convincing his father to smoke a joint with him, to help celebrate that he got into all those schools. It’s the flashbacks that show Nick around the time of high school, and then even afterwards, with some college, that are easy to mix up.

But Nick does go to college for a little while, and then drops out and completely disappears. He again goes days without talking to his parents or letting them know where he is, and then one day, he meets his dad at the diner that they used to come to together when Nick was just a boy. It is implied that Nick must have called his dad, out of nowhere, and asked David to come meet him here. And so the two of them sit down at a table together, and Nick just wants money. That’s the whole reason he’s here. Not to eat or to see his dad or to talk, but just to get his dad to give him some money. Nick is clearly high during the scene, and it’s pretty emotional and powerful.

Nick goes away and there are a number of scenes where David goes out looking for him and finds him in various places. One of these is in a restaurant, passed out on the counter. Another one is in an alley way during a rainstorm. That rehab center that Nick checked into in the beginning, he ends up running away from, and David gets a call from the facility letting him know. And after David tries and tries, he eventually convinces Nick to go out to California for rehab, where he can be under the guidance of his real mom, (Amy Ryan.) And things seem to be working nicely out there for a while. But then Nick comes back to New York for a visit, and it all falls apart again.

Nick is only there, back in New York with the family, for a weekend, but during that time he stays out late one night and doesn’t call or text his father to check in. When he does show up, David asks his son if he is high, and Nick denies it. And he seems to be acting fine. But even still, David wants to be sure, and so he makes Nick take a drug test. We never see the results of that test, but it seems that Nick was clean after all, because now, the results of his father making him take it, drive Nick to want to get back into drugs. And he does. He finds a girl who wants to party with him and the two of them start hanging out and doing whatever drugs they can get their hands on.

There are other controversial scenes that come later on as well. At one point, Nick and this girl he is seeing, break into the house of the family and steal a few things before running out. When the family catches a glimpse of him, the step mother gets in her car and tries to chase after him. That scene is exciting for a while, until it turns out to really have no resolution or end. And there’s another scene where the girl Nick is with hits the drugs a little too hard one night, and has to suffer the consequences. All of these events are scary and heart-breaking, and the only problem is that they keep feeling like more of the same.

That is actually a big problem with this movie overall. It feels repetitive. The trajectory of the film seems to be Nick going to rehab, Nick coming back, Nick doing drugs again, in that cyclical way that keeps repeating itself, over and over again. After a while, it feels tiring. You can only imagine how tiring it must feel for the family too. At one point, towards the end, Nick calls his dad, wanting to come home, and David flat out tells him “no.” He tells Nick to call his sponsor. Then he hangs up and cries, because there is nothing in the world that he would like more, at this time, than to see his son, but he knows he has to be strong and use tough love if he wants to really help the boy. This is some very powerful stuff. There is no real ending or resolution to this film, but perhaps that’s their way of keeping things realistic. This is definitely not a feel good movie, or one that anybody would want to watch again and again, but the performances are sure great, and its a hell of a film.