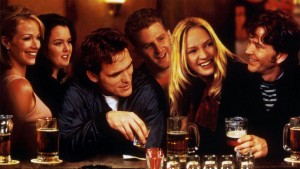 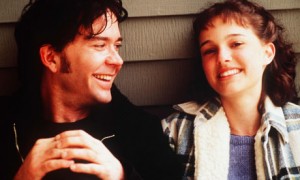 A pretty funny and entertaining film about coming back home to an old group of friends that gets just a little too muttled by its ending.

This is an entertaining film, simply because of the actors involved and the conversations that their characters have with each other. There are a number of stories going on here, and for the protagonist, Willie, coming back home for his highschool reunion, his story is the least interesting of all. That works out just fine, with Willie serving as the rational character in a world of craziness. The characters are fun and the humor and dialogue really carry the movie along. From theories about dating and careers to the appearance of women, to how much a man should let a woman know about himself, this one has got the dialogue running full time, and it always seems to work. Maybe that’s because there are so many different characters with so many different theories. The movie even makes time for Willie to strike up a relationship with a much younger and very unconventional next door neighbor. This film is anything but usual, and it’s relaxed, yet funny tone, make it a very enjoyable experience.

Beautiful Girls is a fun movie. It’s one of those films that really captured a bunch of likeable stars in a relaxed, coming back home and hanging out with the guys, kind of movie. Most of these actors are more or less out of commision today. From Timothy Hutto to Mira Sorvino to Lauren Holly, this movie was definitely made at a different time. It was the mid-nineties, when movies about casual friendships and relationships were easy to make, even when they included all-star casts. Just ask Edward Burns who followed his breakout indie film, The Brothers McMullen with the star studded dud of a movie She’s The One, right at the same time as Beautiful Girls. That was a simpler, more relaxed time. There weren’t plot twists and major revelations to end every movie. Sometimes it worked. Sometimes it didn’t. Beautiful Girls is an example of a film that got the tone, atmosphere, and humor all just right.

A movie is more of less about a bunch of guys who are trying to make sense of their lives. Now, we’re not talking about a stupid, in your face dare of everyone needing to lose their virginity, like American Pie. These are adults, here, and they don’t have to outright declare anything. They like to spend time with each other, to drink, to talk about women, and to come up with theories about life. That’s pretty much about it. And the main character of the film, Willie Conway, (Hutton,) is the most laid back of all. That makes sense for an ensemble comedy filled with unique characters. The protagonist is often the most rationale and level-headed of the bunch, and that helps the viewer relate to him more, navigating through this sea of fascinating and strange characters, the same way that he does.

The movie is simply about Willie going home to the quiet town where he grew up, and reuniting with his family and friends for a highschool reunion. The reunion itself is the least of what’s on screen here. This is no Grosse Point Blank (another movie frome exactly the same time,) where the reunion takes center stage, and is the driving force behind the plot. Here, it’s simply an excuse to get Willie back into town, and nothing more. What we do get, once he reunites with everybody, are some entertaining stories about his friends and what they’ve been dealing with over the last few years.

There’s Tommy, (Matt Dillon,) the guy who was the prom king and highschool legend in his time. Called “Birdman,” by his friends, Tommy is trying to relive the glory days where being popular was everything, and he felt like he was on top of the world. Unfortunately now, Tommy just runs a shoveling / construction company. He’s got a beautiful girlfriend, Sharon (Sorvino,) and the problem is that to Tommy she represents the future of growing up and maturity. And Tommy doesn’t really want that. He wants to live in the golden days of the past, which is why he dreams of being back with his old highschool girlfriend, Darian (Holly,) who is now married and has kids. All of this is pretty entertaining. The only problem is that we never see Tommy cheat on Sharon, and instead only see Darian come onto him, and Tommy push her away. Now, it is said many times that Tommy and Darian have been having an affair for years. In fact, Tommy even gets beat up because of this. But the one time we see the two of them together, he’s pushing her away. Very strange. The movie should have probably began with the two of them together, in order for him to really have a full arc during the course of the film, and completely change.

Another one of Willie’s friends who is not in the best of ways when Willie arrives back in town is Paul, (Michael Rappaport.) Like those other actors in the cast, this movie comes from a time when Rappaport was making his best films. From Higher Learning to Cop Land, these were the golden days for this group of actors, (ironic since that is exactly the way Tommy sees his highschool days here.) For Paul, his big issue is that the girl he has feelings for, and used to date, Jan, (Martha Plimpton,) is now dating someone else. Sounds like a pretty ordinary situation, right? What makes it special is all of Paul’s theories about what Jan dating someone else means. He is particulary troubled by the fact that Jan is a vegetaria and yet she is dating a meat cutter. He never calls the man a butcher, but a meatcutter. And Paul doesn’t care about Jan’s take on this from a moral point of view, like that she is supposedly against killing animals, so what is she doing with this guy. Instead, Paul ponders about it from a financial point of view, wondering what Jan is getting from the relationship, since she doens’t eat meat. He asks his friends, “what kind of life can she have with a meatcutter,” as if Jan is trying to figure out her entire life right now, just because she is getting with this guy.

Aside from Tommy and Paul, there are a few other, more low key characters on the scene. There’s Kev, (Max Perlich,) a sort of dead beat, who works for Tommy, and then there’s Michael, (Noah Emmerich) who is the one that settled down, got married, and now has kids. He is what Willie looks to as his future. The other guys are his past. Willie is dealing with a conundrum of his own, although it is the least explored problem in the movie. He’s got a girlfriend back home, in New York, and he doesn’t know if he’s ready to take the next step with her. This girlfriend is Tracey, who will be coming to town in a few days to meet everybody. It’s not that Willie needs to decide if he’s ready to propose or not. Instead, this is more of a situation where he needs to decide if he even wants to stay with Tracey at all, or else go back to the fun, living it up days of being single.

The problem is that with Willie, there are temptations all around. There’s Marty, (Natalie Portman,) the highschool girl, who lives next door and gives Willie the most interesting banter and conversation he’s had in years, and then there’s  Andera, (Uma Thurman,) the mysterious beauty who rolls into town, saddles up to a bar, and suddenly has everyone’s attention. Andera is  the cousin of the local bartender, and she is staying around for a few days, just like Willie. The timing couldn’t be more convenient. Anders strolls into the bar where the guys are hanging out, and everyone of them goes ga ga for her. It is Paul who strikes first, asking Andera out, and attempting to use her to make Jan jealous enough to want him back.

This movie could be looked at as basically a series of subplots or conversations. While that might seem like the actual story is limited, (and believe me, it is, just look at how Willie gets the smallest story of all,) the dialogue is rich enough to easily make up for it. Aside from Paul’s rant about the meatcutter, he’s got another one where he compares telling women too much to the man behind the curtain in the Wizard of Oz. Paul tells Willie that you can’t let women know the truth about what it’s like to be a man. You can’t let them behind the curtain, to see the reality. Instead, you have to let them believe in the magic and mystery.

There’s also the monologue by Rosie O’Donnell, a friend to Sharon, about how real women don’t look like magazine models. The things she says, about how small hips go with small boobs, and big hips (and therefore heavier women,) are the ones who have the big boobs, might seem kind of obvious, but the way that two guys follow her through a pharmacy, hanging on her every word, is pretty hilarious. It’s like she’s telling them things that they always knew, but never wanted to believe. These are the kinds of conversations that make the movie worthwhile. They aren’t brilliant, by any means, and that’s kind of the point. Consider them like Seinfeld observations about life and beauty.

And then there’s the relationship Willie has with Marty. Now this one is strange. There’s no way in hell that a movie made today gets away with something like this. Granted Willie never kisses Marty or anything like that, but there is total flirtation going on here, and the movie even calls Willie out on it more than a couple of times. Willie tells his friends about Marty, considers the idea of waiting for her to be of legal age, and even makes fun of the guys her own age, that she might be interested in. And despite all this, somehow the movie makes it seem liek it’s all okay. After all, they’re really just talking, and nothing more. And that’s pretty much a representation of the whole tone and spirit of this movie. It’s a film that is very honest about relationships and analyzing the simple brutality of things. I kind of like that Willie’s story is the least compelling of them all, where we don’t even meet Tracey until the final act of the film. The movie’s not about her. It’s about Willie and his friends. And better to have his story be the most basic of the bunch than to feature the usual cliches that we’ve seen a hundred times before. By presenting the film this way, where it’s almost like a series of short and simple, humor-filled stories all intertwined with each other, the movie frees itself up to go anywhere. Sure, it’s anti-climactic, but it’s not about the end result, it’s about the journey to get there. In this movie, the journey is a hell of a lot of fun.