A Beautiful Day in the Neighborhood **1/2 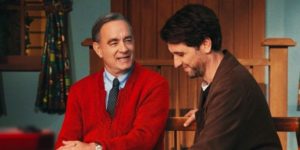 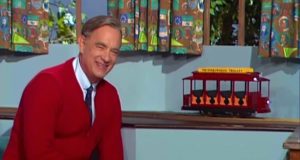 An interesting movie that tells a Mr. Rogers story in a most unusual way.

A Beautiful Day in the Neighborhood is a movie about Mr. Rogers told from the point of view of a journalist named Lloyd. Now that would be fine if it was really the story of Mr. Rogers. It isn’t. This is Lloyd’s story all the way. Mr. Rogers is just a side character who influences Lloyd. The way the movie is able to pull this off (without really upsetting people for false advertising,) is by making the time period that the storyline takes place in be the time when Lloyd was conducting a series of interviews and conversations the kids TV show host. So we do get a handful of looks at Rogers and his show, but not quite enough about his life. The reason for this is to give us a somewhat darker and edgier film than we would have otherwise. It only partially works.

We finally have a Mr. Rogers movie. Not the documentary about the likeable Children’s TV show host from the 80s, that came out about a year ago, but an actual narrative with Tom Hanks playing the well-known character. It seems like a sure fire recipe for success. What could possibly go wrong? This movie does just about the only thing that could throw a monkey wrench into its potential… it makes the movie NOT about Mr. Rogers. That’s right. This isn’t his story. It’s the story about a man who interviews him, and has a series of interactions with him, and how the time he spends with Mr. Rogers changes his life.

Now, to be clear, I’m not saying this is necessarily a problem. But it’s certainly not what we might have expected either. The movies trailer does nothing to clue us into the idea that the story will be told this way. And so it does come as a surprise, and an unfortunate one since audiences were expecting one thing, (and excited about it,) and ended up getting something totally different. But it’s also fair to say there are reasons why this decision was made, and they were probably good ones… without telling the story through the eyes of a darker character, the movie would be too light and fluffy without any real conflict. Perhaps that’s it, and perhaps the movie is better because of it.

The man who the movie is really about is named Lloyd Vogel, (Matthew Rhys.) The movie is entirely his story. It’s about him and his father, Jerry Vogel, (Chris Cooper,) dealing with their issues. Mr. Rogers just points Lloyd in the right direction every now and again. So the movie opens with Mr. Rogers doing his theme song and beginning one of his shows. And it leads us to the story of Lloyd.

During that opening segment, Tom Hanks, as Mr. Rogers,  nails every beat. He doesn’t exactly  look like Mr. Rogers, (I wish he tried using some prosthetics to make himself look the part a little more, the way Nicole Kidman does for some many movies.) But that’s not Hanks. This guy has played more real life heroes than anybody, (Captain Phillips, Sully Sullenberger,) yet the most he’ll do for appearance sake is change his hair. We’re not asking for a full on Christian Bale / Joaquin Phoenix in the Joker / DeNiro in Raging Bull, where he puts on or loses a ton of weight for the part, (which I believe Hanks did for Cast Away,) but how about some facial prosthetics? At least make the effort.

Still, as far as voice and gestures go, Hanks has got this character down. As he hangs up his red jacket in the closet, and changes his shoes to slippers, gently tossing a shoe from one hand to the other, you feel like you are right there, back again, with the real Mr. Rogers. He reminds us of his mailman, who always says “Speedy Delivery,” and then we meet the mailman who drops something off. And this leads us to a large poster board where Mr. Rogers opens panels to reveal special pictures of people. One of these pictures is of Lloyd. He’s got a bruised and black and blue nose, and looks pretty unhappy. Mr. Rogers tells us that somebody has hurt his friend, Lloyd, and that we are about to find out more.

From there, we go on a flashback to see Lloyd at work, getting a story from his editor. We learn that most celebrities don’t want to be interviewed by him. They love his work, and are big fans, until they read what he actually writes about them. Lloyd is the kind of guy who doesn’t sugar coat things. And he finds the negative in nearly everything. He makes his subjects look bad. And the interview of Fred Rogers is really one of the only assignments his editor feels like she can give him.

Before he goes to the interview, however, he’s got a weekend wedding to go to. It’s the wedding of his sister, (her second or third.) This time, she has invited her father, a man who was cheating on their mother, while she was sick and dying. Lloyd hasn’t spoken to his father in years and is not looking forward to seeing the man. And when they do encounter each other, it goes horribly wrong. The result is a fist fight with lots of punches to the face, including Lloyd punching his father, accidentally punching the groom, and even getting a punch to the face himself.

And what does this all have to do with Mr. Rogers? Nothing. Although it’s probably more interesting telling the story this way. You’re not going to get any fist fights in a movie that is really telling the story of Mr. Rogers. Lloyd goes to interview the celebrity the next day, and of course, Mr. Rogers questions him about the black eye and bruised nose. The interview becomes more about Lloyd than about Mr. Rogers. And Lloyd leaves it having written down very little. This is all played for comedy. Back at home, Lloyd is surprised to learn that his wife has invited his father, as well as the fathers girlfriend, over to their house. And all three characters are literally sitting in the kitchen, waiting for Lloyd when he arrives.

Now, there are so many problems with this. First of all, it’s a complete betrayal by his wife. Not only to invite them, without speaking to Lloyd, but then to have them actually be there in the house, waiting for him. And then on top of that, based on this action, his wife is more responsible for Lloyd repairing things with his father than Mr. Rogers is. So naturally things are talked out, we learn what happened between Lloyd’s parents that caused them to split, and relationships start getting repaired.

Throughout the movie, Lloyd does continue to see Mr. Rogers. They meet in a number of locations, for one conversation at a time. And we get a window into the Mr. Rogers show and how the television host lives. Every exterior, establishing shot in the movie uses miniatures just like the Mr. Rogers show. And we watch Fred Rogers talk by using the puppet, Daniel Tiger, both on the show, and also in real life, in a conversation he has with Lloyd. We even get a weird hallucinogenic dream where Lloyd is a puppet sized character on the Mr. Rogers show. It’s all pretty cool. But as far as windows into who Mr. Rogers was, and what his life was like, we get very little. There is one brief conversation about his sons and how there was conflict between them in the past. But that’s it. This is not Mr. Roger’s story. It’s Lloyd’s story,