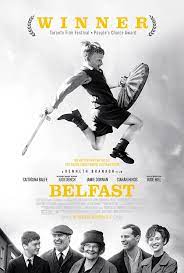 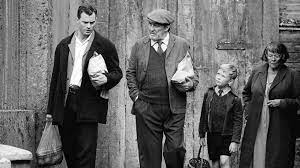 An entertaining and artistic movie, although definitely a little slow and uneventful at times.

Belfast is okay. It’s a nice looking movie, with a decent enough storyline. The problem is, it has lots of potential, and yet doesn’t exactly deliver. This is the story of a boy in Ireland, going about his business of living an everyday life with two grandparents, a brother, and his mom, while his father works overseas and comes home to visit from time to time. That’a when the riots start happening. Protestants are angry at the Catholics in their neighborhood and are persecuting these people for their religion, and we get to see some of the attacks and destruction. But the problem is, we mostly get to see these things just in the beginning. There is a character who represents the enemies, and is clearly the villain, only even he doesn’t get all that much screen time. The threat is there, but the movie doesn’t give it enough attention. And so we are left with a mostly kind of slow film, that from time to time gets interesting.

To talk about Belfast, one has to first address the fact that the movie is in black and white. Making a movie like that in today’s day and age just announces to the world that they are going for art, and for an Oscar, and prestige. In other words, it isn’t necessary to make a movie that way, and it certainly doesn’t make the movie better, but it does tell the Oscars that it wants to be taken seriously. It tells them that this is something which will make their movie stand out from the other movies of this year. And so we get movies like Roma and this, conveniently being releases at the exact time of the year that will get the Oscar’s interest, and accomplishing just that. All of this is not to say that Belfast is a bad movie at all, it’s just a forgettable one. Out of all the movies nominated, this one is the least impactful. Let’s examine the reasons why.

Belfast is the movie about a time in Ireland when the working class people were generally divided into two groups… the Protestants and the Catholics. That time was the late sixties,  and riots were breaking out in the streets of a small town. The riots were by Protestants who were targeting the homes and businesses of Catholics. Now all of that makes for an interesting premise. Especially when you consider that the movie is seen through the eyes of a boy. One can’t help make comparisons between this movie and Jojo Rabbit, which also was about a time of bullying and violence against ones neighbors in a small European town, seen through the eyes of a boy. That movie was of course about the Holocaust, something that most of us have a decent working knowledge of, whereas this movie is very specific to the times in Ireland and to the life of the filmmaker.

That filmmaker is Kenneth Branagh. Here’s a guy who has made a career for himself as an actor, then tried his hand a directing, became known as the go-to filmmaker for Shakespearian work as a director, and has now found himself at a place where he is acting and directing at the height of his career. For the first time, Branagh has become the face of a franchise, with the Hercule Poirot films Murder on the Orient Express and Death on the Nile. And as a director, with this movie he has made a very personal film about events he experienced in Ireland when he, himself, was a boy. The problem is, none of this is all that good. Murder on the Orient Express was pretty lousy, and I can’t imagine Death on the Nile is much better. And Belfast is a poor man’s Jo Jo Rabbit, to put it kindly. Not that Jo Jo Rabbit was so great, or that Belfast is so terrible, but it is certainly nothing special or memorable in any way.

The movie chronicles this time, when a group of Protestants were using violence against their neighbors, making this town a terrible place to live for anyone who didn’t get on board. But the problem is, we never see what started all of this. What made this group start this quest to eradicate the streets of Catholics. Now, we never see the beginning of the conflict with Holocaust movies either, so to be fair, we should probably just go with it here, but even still, this is a situation that is not common knowledge the same way that the Holocaust is, and so a little background information would have gone a long way. What we do get is an opening scene where our protagonist, Buddy, a nine year old boy, is in the street enjoying a regular day when a riot breaks out. He’s got his playful garbage can shield and a makeshift sword in hand, and all of a sudden people start shouting to get the women and children out of there. Then the fires start. Buddy’s mom, Ma, rushes out to rescue him and uses his shield to deflect objects that are being thrown in their direction. It’s a great opening scene. Unfortunately it’s the best scene in the entire movie.

After the riots, we got to Church with Buddy and his brother, where the Minister goes on a rampage of a speech about how there are two roads and one must decide which one to take. To call the Minister passionate about this speech is an understatement. He rivals Howard Beale’s preaching in Network, and the way that Buddy takes all of this in is pretty hilarious. He goes home and starts drawing out what the Minister said, trying to analyze and interpret it, and even asking questions to his brother about it. And then we meet the rest of the boy’s family, including two grandparents that live with them (played by Ciarin Hinds and Judy Dench, who were both Oscar nominated for this movie in the supporting actor / actress races.)

Throughout the movie, the grandparetns give Buddy advice about things. Especially his grandfather who advises Buddy about girls and about how to turn in a test paper at school, in such a way that an answer he writes might actually look like two different answers at once. The grandparents are basically comic relief here. And they distract and lighten the mood a little bit from the real story, which is this conflict that is happening in the streets. There’s a guy named Billy Clanton who riles everyone up and leads the crowd in causing these riots. Billy is a known trouble-maker who uses this as an opportunity to bully his neighbors. That doesn’t just mean the Catholics. Billy also bullies the Protestants into joining his cause and persecuting the Catholics. He demands payments from his Protestant neighbors, to support the cause. And if he doesn’t get what he wants he uses violence against them. We see this in one quick moment, when he walks up to a man and punches him square in the throat.

Billy represents the antagonist of the movie. And it’s great that the movie has a threatening antagonist and therefore has clear conflict. But the problem is, there’s just not enough of it. Buddy’s father is Pa, and he is only in town from time to time. Pa works overseas, in England, and is trying to move the whole family there, along with him. When he is in town, Pa has talks with Billy and tries to get the man to stay away from his family. It doesn’t work. Now, this is the most interesting and exciting material in the movie, so why isn’t there more of it? Why don’t we get real threats by Billy or anything that would stand out as memorable?

Instead, we get little stories from Buddy’s life. Him trying to impress a girl by doing well at school, and getting to move up seats in the classroom. Him going to a candy story with a an older girl friend, who is a bad influence, and stealing a candy bar. Him going into a grocery store during one of the riots, and stealing a box of laundry detergent to bring home to his family (again with the influence of this friend.) These stories are only moderately entertaining. The truth is, they’re also kind of dull. Especially compared to what’s going on in the streets. We literally see a car get set on fire in a very early scene (and boy does it look hauntingly beautiful in black and white.) Nothing that  comes after this can compare.

There are two other things happening in the story here, and neither one is explored enough. The first is that Buddy’s parents are having financial troubles. They owe a lot of money. We get to be a fly on the wall for one scene where the two of them are arguing about it, and Buddy comes down the stairs and walks into the conversation. But that’s about it. The other thing is that the town sets up some sort of barricade at the end of their street to prevent more attacks and trouble. The only problem here is that Billy can be found sitting in a chair at the end of the barricade, as if he runs it, making it seem like he and his mob are the ones who set it up.

Perhaps the barricade is meant to be a line that Billy is no longer permitted to cross, but if so, then this really should have been established. But the movie is more interested in exploring little observational moments with the grandparents then it is in exploring the real conflicts going on. Understandably, this story is told from a child’s point of view, and a child at the time would not have really understood all that was going on with the conflict in the streets. To a child, that would be all background material. But as a movie, including more of they content would have been far more interesting than what we often get here. Billy is the villain, and he’s where the excitement is, and the movie could have used a whole lot more of him.