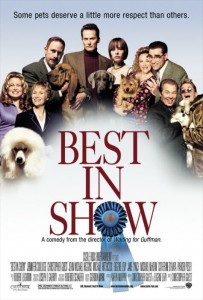 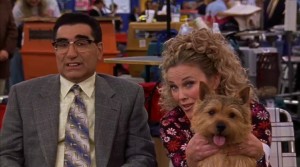 A very funny and clever movie filled with interesting characters and their very strange lives.

Best in show is my absolute favorite of the christopher guest movies. I’m pretty sure it’s many people’s favorite’s too. like rushmore is to wes anderson, this one is known to be guest’s best. as a director, he has a lot of great movies and all of them are fun, but for those who know his work well, this one holds a special place on their lists. it’s the movie where almost everything works, and works out pretty brilliantly. eurgene levy, for example, has never been funnier than he is in this film. and that’s including the american pie movies that brought him to the attention of the mainstream.

the movie is about owners and their dogs. really it’s about a big dog show that will be coming up in a few days in philadelphia and the people who are bringing their dogs there. the show is a contest, with the winner being crowned the best in show. and the film is given a documentary feel to it, just like all of guest’s films, where the characters talk to the camera and tell stories about their lives.

the characters are mostly couples, and they are all very diverse. the movie opens with the catalogue kids, hamilton and meg (parker posey). these two are the extra sensitive, extra crazy superficial duo. they both have large braces and talk about how they were raised on catalogues and know everything new that clothing stores have to offer. throughout the movie, hamilton in particular goes around either checking the labels on people’s clothing or discussing the different shirts he has and what he might wear. and the funny thing is, it’s not like he works in the industry. this is all just a hobby for him. they tell a story about how they met at two different Starbucks stores, and it’s perfect for them because they are all about the chains and the popular brand names.

the movie begins with these two discussing the way their dog caught them having sex one day and hasn’t been the same ever since. there are a lot of funny things about this situation. first, they are talking to a therapist about it. second, the dog is probably fine, but the two of them are so sensitive that they freak out over everything. and then there’s the way that the movie plays the scene as if they are talking about a child and only at the end of the scene do we pan to the couch to see the dog lying on it, as if a patient in a real therapist’s office. it is quite the hilarious image. especially since the dog looks like he could care less. he has a look that says that everyone in the room is insane and he just wants to be left alone.

another character that we meet early on is harlan pepper. he’s an interesting fellow and the only one who is really by himself in the movie. he’s not part of any couple or duo at all. and he’s definitely a little strange. but harlan is the least funny character in the movie. he’s the one played by christopher guest, and more often it’s the people around him who are funny, like the guy at the fishing store where he works, who keeps insisting that harlan is going fishing. it’s not that harlan is terribly unfunny or anything, it’s just that he’s not on the same level of hilarity as the other characters.

now we get a gay couple and also an all women couple. the gay couple is michael mckeen and john michael higgins. they have wonderful chemistry here, and higgins in particular is a riot. he plays gay magnificently and makes funny little comments about everything. when in a butcher’s store, for example, he asks to see a salami just so that he can hold it.

the female couple is played by jane lynch and jennifer coolidge (stiffler’s mom, another american pie alumn). coolidge plays sherri ann cabbot who is married to a very old billionaire. she talks to the camera about how there is still lots of sexual energy in their relationship and you can tell how ridiculous the idea is. especially since the old guy can’t even talk. he just blinks a lot. and christy cummings (lynch) is the dog trainer who takes care of her dog. she and sherri ann have a funny report where they are both into different things and tend to give each other crap about it. but they try to do it in a nice way to shut the other one up. i love sherri ann’s line, talking about the place that christy ran before she met sherri ann, and saying bluntly, “it was a shit box.”

and then there’s my absolute favorite couple of the movie. cookie and gerry fleck. they’re played by catherine o’hara and eugene levy and the movie features a couple of running gags about them. the first is that gerry has two left feet. literally. both of his feet are left feet and that comes up a couple of times. but the second gag is even funnier. it’s that cookie used to be so promiscuous before meeting gerry, that she slept with nearly every guy in town. throughout the movie they encounter different people who she slept with and gerry’s reactions are always priceless.

the segment of the movie that i find the funniest involves the two of them going to stay with the former flame of cookie. how gerry ever agreed to this, i don’t know, but they are now supposedly “friends” with this couple, and cookie has convinced gerry to take her to see them. the former flame is played by larry miller, who clearly still has a thing for cookie and doesn’t hold back on it. i won’t give anything he does away, but his character is completely outrageous and of course it is all about watching gerry’s reactions.

aside from all of the great couples and characters who have dogs, there’s also the announcers at the show played by fred willard and an english guy who can’t stand fred willard. willard makes the dumb and ridiculous comments that are always funny, and this other guy has to respond to them. willard likes to make comparisons and throw crazy ideas around. be it a book about women bathing dogs, putting a sherlock holmes pipe in a dog’s mouth, or going on a date with one of the judges and having her judge him, willard is absolutely loaded with ideas. the movie saves him for the big climax at the show and this infuses the film with a new energy. for me, willard is the next funniest character in the movie, right behind gerry fleck. but the thing that’s amazing is that nearly every character works and so do the creative story lines. when two characters don’t have money for a hotel room, for example, they wind up in a utility closet. this movie is smart enough to think of such crazy ideas, implement them, and then have the characters ask questions like, “what about room service?” it’s a truly great film.