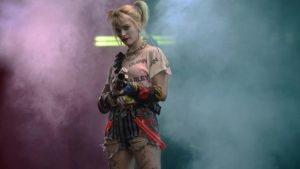 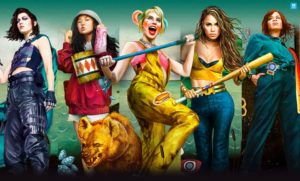 An okay superhero movie… kind of fun without being anything particularly special or memorable.

This is a fine, entertaining and enjoyable film. It’s kind of like Venom or the second Deadpool movie in that way. Basically it’s a B movie. And it knows it’s a B movie. It’s guilty pleasure fun. And having an R rating really helps. The movie has some good humor and colorful lively set pieces. The problem is that it’s not very memorable or unique. The story of Harley Quinn, a character who as known die being the sidekick to the Joker, gets her own movie. Considering how far down the line of succession this character is, the fact that the movie is pretty decent is a nice success.

The new Harley Quinn movie, Birds of Prey, is a superhero film that wants it all. And it kind of gets away with achieving that goal. This one wants to have the light hearted campiness of Suicide Squad or of the Joel Schumacher Batman films, but it also wants to be taken seriously, or at least not considered stupid. And so it works with an R rating to ensure that the humor and tone never become too kid friendly, (the way those Shumacher films, Batman Forever and Batman and Robin did.) Instead, this movie is closest to something like Deadpool, another superhero movie that gets the most out of its R rating, while at the same time being colorful and funny. And it’s fair to say that Birds of Prey is about as good as Deadpool 2, which is to say not bad at all, but also, nothing great.

To start looking a little deeper at this film, one really has to start with the characters. Harley Quinn is the star. Quinn was the sidekick to the Joker in lots of comics. She became known to the public through Batman The Animated Series, in the nineties. So, at no point was she ever one of the main Batman villains, (The Joker, Catwoman, The Penguin, and the Riddler.) In fact, she was never even a secondary Batman villain like Two-Face, Mr. Freeze, Poison Ivy, or Bane. She is entirely built as a sidekick to the Joker. And so it’s kind of crazy to think that the Joker isn’t even in this movie, (although he sure is mentioned a lot.) It’s kind of like making a Venom movie without Spider Man in it, (oh wait, they just did that with the Tom Hardy film.)

So perhaps this is the way that things are going these days. The superhero movie genre is so big and so explosive, in terms of the amount of money it brings in, that studios are just trying to make any spinoff or take on any side character imaginable to see what works, (case in point: next up for Sony is the Jared Leto movie Morbius… a very unknown character.  So, Leto tried playing the Joker and it didn’t work, which leads to him now trying to play a side player as the star of a movie. And in all honesty, it’s a fair gamble.) Also, worth noting is that the recent Joaquin Phoenix Joker movie had an R rating and became one of the highest grossing R rated movies of all time. That one is so interesting for two reasons. First is the R rating, (which completely led to Birds of Prey getting it’s R rating as well.) And secondly it’s worth noting because it’s the Joker, the very role that Leto stumbled with and that Suicide Squad screwed up. What does it all mean? It means that studios are starting to learn to stop interfering and just let the filmmaker do their thing… they gave director Todd Phillips free reign with Joker, which was very different from what DC and Warner Brothers did to David Ayer with Suicide Squad or to Zack Snyder with Justice League.

And each of these five characters, as well as the villain, Roman Sionis, (better known as Black Mask, played by Ewan McGregor,) make up the story. Basically, this is the story of the five women eventually coming together, and of the Black Mask becoming a psychotic villain. And the movie takes its time to get each character to this place. At the start of the movie, Harley, (played by Margot Robbie, who also produced this movie,) is dealing with her breakup with the Joker. Perhaps that idea is more symbolic than anything else, with this movie and the new direction of the DC Universe wanting to cut ties with the Jared Leto Joker, in favor of the Joaquin Phoenix Joker. So cutting him off and cutting him out, right from the start of the film, is a pretty good move. But Harley takes the breakup hard, and that means bombing Ace Chemicals, the place where she and the Joker formed their bond and connection as a rebirth of sorts, with him dipping her in a vat of chemicals, (we saw all this in Suicide Squad, the sort of prequel to this movie.)

Not only does Harley destroy the chemical plant, but she moves into an apartment upstairs of a Chinese restaurant, where an older Chinese man named Doc, promises to keep her secret. And she buys a Hyena for a pet, (and then sicks it on the store owner, who is hitting on Harley in all the wrong ways.) Pretty soon Harley is spending time day drinking at the bar of Sionis, where Dinah Lance, also known as Black Canary (Jurnee Smollett-Bell,) is a singer. Harley breaks the legs of Sionis’ driver when he crosses the line with her. Then a guy tries to rape Harley in the back alley and Lance comes to her rescue. This catches the attention of Sionis, who makes Lance his new replacement driver. And just like that, a four character situations (two drivers, Harley and Sionis,) has come full circle. Harley took out the driver who worked for Sionia, Lance saved Harley, and Lance became the new driver, working for Sionis. This movie is kind of smart like that.

It’s also smart in the way it shows us clips of things that are coming up, and then back tracks on the plot in order to lead us into those things. So, for example, we see Cassandra Cain, an Asian girl of around high-school or college age, sitting in a police interrogation room. And we see Harley busting into the police station. But we have not idea what it all means. And then we go back to see how both characters ended up there. Cain stole a diamond from Sionis’ right hand man, Victor Zasz, (Chris Messina, the actor who was so great as the lead detective in the clever elevator horror thriller Devil.) Then Dina called the police detective, Renee Montoya, (Rosie Perez,) to let her know that Cain had the diamond. And that led to Montoya bringing Cain in. Which led to Harley Quinn making a deal with Sionis, where she promised to get the diamond back for him. And that’s how Harley Quinn ends up breaking into the police station.

Aside from all of these connected characters and stories, there’s also another character going around, who isn’t quite as connected as the others. This is The Huntress, played by Mary Elizabeth Winstead, (Scott Pilgrim Versus The World.) She’s a vigilante assassin, who is out there killing gang members one at a time. It turns out there’s a reason behind her murders, and it has to do with revenge from her childhood. She’s there, killing the same guys that Harley and the others are killing, only for very different reasons.

And all of this leads to the girls teaching up in the end. That means the teacup includes both criminals, like Harley, and cops, like Montoya. It feels kind off forced, as the girls look out the giant windows of an abandoned fun house, in the middle of an abandoned carnival, as the Black Mask and his men arrive. Sionis now dons his mask, that gives him his name, and he sends in a bunch of faceless, nameless goons to go after the girls. What ensues is a pretty campy fight sequence, involving giant hands that bad guys get thrown into, as part of the set decorations, (it is the inside of a fun house, after all.)

The humor in this movie works. The violence and voice-over and lively music all work. The only thing that doesn’t fully work is the story. it’s just a little too simple. You have the evolution of these girls, and the origin story of how they each came from different walks of life, and how they ended up finding each other and coming together. But it feels a little clunky. This is far off from the way one villain led to another in Batman Begins, with the characters spiraling into each other in order to keep the story flowing in new directions. Here, in Birds of Prey, it’s all one direction the whole way through. That direction is to get the characters to a point where they are all, or almost all, joined together as a single team by the end of the movie. And they get there, to that spot, pretty successfully. This movie is definitely fun. It isn’t always the smartest or the most creative and original, but it is always fun. Margot Robbie as the lead character definitely shines. We knew she did from Suicide Squad, only that movie surrounded her with lousy talent and tone. With this one, the goal is to make us laugh and to keep our attention, and Birds of Prey definitely does both of those things.