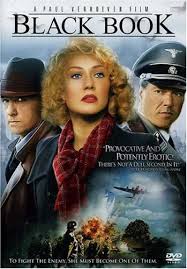 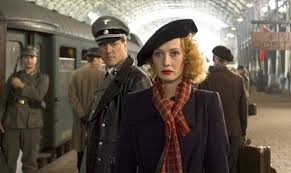 A gutsy and intense film with only one flaw, it is just a little too long.

A very powerful and dramatic movie, this film tells the story of a Jewish woman, Ellis, trapped in Holland during the time of Nazi occupation. It spans a long period of time in her life, as Ellis starts out living with a family, goes on the run, and then winds up posing as a German, infiltrating the Nazi camp as a spy. There is a lot of evil here, by the Nazi commanders, and the plot has all kinds of unexpected twists and turns. It even has a final act where a new villain emerges and new surprises are revealed. Like The Lives of Others, this is an excellent film about a very scary time in Germany. All of that is captured in a way that really lets the audience feel the tension and paranoia around every corner.

Black Book is an intense World War II German film. This movies rivals The Lives of Others, another German movie made the same year, as both being fantastic films that completely captured the mood and paranoia of living in Germany at a certain time in history. The Lives of Others was all about the Berlin Wall. Black Book is about the Nazis and the Jews that they were hunting. The film was directed by Paul Verhoven, a man who really made a name for himself in America with movies from the eighties and nineties that brought audiences into the world of alien sci-fi, crazy sexuality, or both. This is the man who directed Robocop, Total Recall, Starship Troopers, Basic Instinct, and Showgirls. He was a legend in his time, but Verhoven left Hollywood and the movies. Black Book, made over a decade after he was a big name on the silver screen, is the film that shows he’s still got it. Made in 2006, it came out long after his other films, and is very different from anything the filmmaker has done before. There’s no sci-fi in this one. It is a much more serious and grown up movie. For Verhoven, it definitely shows off his mastery and skill.

Black Book is certainly Verhoven’s most historical film, and quite possibly his most realistic too. It is by far his most serious and dramatic picture. The film opens with a woman named Ronnie, visiting a kibbutz (a Jewish community or neighborhood,) in Israel. Once there, she comes across a woman named Ellis, who she recognizes from her past. The girls hug and embrace each other, and we can tell that they have been through something both emotional and devastating together. We now go back in time to see what that memory is. The movie takes us into the time period where World War II was still going on, but approaching its end. Ellis, now much younger, of course, is staying with a non-Jewish family, lying to authorities about her name. The head of family makes Ellis say Catholic prayers to everyone at the table, each night, before eating. This is a way of rubbing it in her face, how much she needs them, and Ellis certainly resents it. Then one night, a bomb drops on the family’s house, and Ellis sees the whole thing from off in the distance, while she is out.

Suddenly, Ellis has no place to live. She stays in the house where the rest of her family is hiding, only there is not enough room for her, and so the situation is very temporary. Before they have a solution, day, a man who is known to be a friend to the Jews shows up, and tells Ellis about a way that he can help her. He knows about a boat that travels in secret during the night and helps transport Jewish people out of the country to a place where they will be safe. Ellis signs on to go, and she gets her entire family to go as well. They all climb onto the boat that night, packed in alongside tons of other Jewish people, all carrying their valuables in suitcases. The boat quietly sails through the marshes and then it rounds a corner and a bright light flashes on. A giant Nazi boat stands before them, and was there the whole time, just waiting in the shadows and the darkness. The Nazis open fire and execute everyone on board. Only Ellis escapes. The film does a good job of showing us that she was not on board at the time, and was away from the boat, but even still, this is two close calls in a very short amount of time. The first was the house with the bomb dropping on it while Ellis was away. Now the boat is fired upon, and again, Ellis is away from the area of danger and the time of the incident.

Ellis leaves this area and goes to Holland where she joins up with an underground resistance organization. This group consists of some Jewish people and many others who are Dutch, and want to help. While on the train, traveling here, Ellis hits it off pretty well with a German commander, Ludwig Muntze (Sebastian Koch, who was the star of The Lives of Others.) Now the organization asks her to get in close with him and become their inside player and spy. She agrees, but has some hesitation about just how far she will allow herself to go. Luckily Muntze turns out to be a pretty decent guy, set on making peace between the Germans and the Dutch, even if it means going behind the backs of his superior officers.

Ellis also continues to pursue the man who set her and her family up, by promising them all safe passage on that boat. Another man, the one who lead the Nazi soldiers during that execution works very closely with Muntze, which means that Ellis sees him on a regular basis. This man is Gunther Franken, and Ronnie, the woman from the start of the film, is there, at the compound, as Franken’s sort of girlfriend. Ellis finds out that the man who set her family up on the boat actually supplies the names and boat times to Franken. She tells the members of her organization this, and they devise a plan to kidnap this man. Only the kidnapping goes horribly wrong and the man nearly escapes. He starts running away, and the group members have no choice, but to shoot and kill him.

Muntze, meanwhile, finds out who Ellis really is. While he is upset that she lied to him, he also recognizes that she is a good person, and doesn’t allow the fact that she is Jewish to change the way he feels about her. This man is all about non-violence and finding solutions. Ellis tells him about Franken raiding the boats and killing the Jews on board, and Muntze tries to do something about it. He goes to the head authority in the Nazi army compound, and reports what he knows about Franken. This authority figure searches Franken’s locker, only he finds nothing. Now it’s Franken’s turn. He turns on Muntze, claiming that Muntze made deals with the Dutch, behind the backs of the authority, to avoid violence and bloodshed. This insubordination is enough to get Muntze locked up.

Ellis is now in bad shape. The Germans have Muntze locked up, as well as some members of the organization. Those left decide to raid the prison to get all of their members out. Only once again, the Nazis are ahead of the game and anticipating this. The raid goes horribly wrong, and the Nazis pop out of prison cells, firing away. They then bring Ellis in and show her that they know the organization has their office bugged. The intentionally now have a conversation in which they make it sound like Ellis is working for them and is the one who has been feeding them information. This conversation takes place with the Nazis knowing that the Dutch are listening in on the conversation.

Not too long after this, the war ends. Only things get even worse for Ellis. The Dutch now think that she is the mole who sold them out, and they lock her away in a prison, alongside the Nazi women who are her real worst enemies. Meanwhile, Muntze, in his cell, is doing worse than ever too. The Nazi soldiers manage to convince the Dutch that even though the war is over, they have the right to exercise judgement and punishment on their own man. The Dutch agree and so Muntze is given the punishment that the Germans had planned for him.

Ellis, meanwhile, is rescued by a man who is the resistance organization with her, and now she starts looking for the person who was the real spy, herself. There are at least two more twists here, in the final portion of the movie, with Ellis first being convinced that the spy is someone and then realizing that she was wrong and finding out who the real villain is. It’s all pretty great. The movie is long, but each portion is scary and hunting in its own way. Ellis has a number of situations where one might expect things to suddenly get better for her, (like when the Germans lose the war,) and instead, it only gets worse.

Black Book is an excellent film. It is haunting and epic-feeling in all the right ways. This movie really captures the senseless murder that the Nazis did to people and how those who survived it managed to remain alive. For Ellis, our protagonist, we watch her go through all different stages of the war. We see her staying with a family, then spying on the Nazis and working for the resistance, and finally, locked away as a prisoner of the people she was on the same side as. It’s pretty emotional. On top of that, the movie also serves as a mystery with the questions of who the spies were that fed the German their information, always looming over our heads. The movie might be kind of long, but you don’t feel it when watching. This is a pretty powerful film.