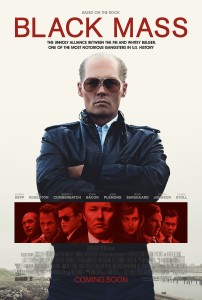 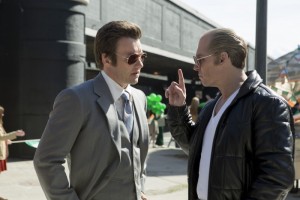 It’s dark and distubring in a Goodfellas-mob kind of way, and this films got a hell of a twist, with the FBI and one particular agent being all but partners with this bigshot mafia kingpin.

A fantastic movie, this film is right up there with some of the most intimidating gangster films, from Goodfellas, to Casino, to The Departed (all Scorcese movies, by the way.) This film is not. It’s by Scott Cooper, a man who for the first time shows that understands the importance of editing and cutting, keeping the pace quick and thrilling. Johnny Depp is fantastic as Whitey Bulger, a gangster who is absolutely terrifying. And Joel Edgerton plays the FBI agent who knew Bulger as a kid and always wanted to be his friend. Now, for the first time, he has a sort of chance. Bulger brokers a deal between Bulger and the FBI, and it makes for quite an interesting story. The scenes of Bulger are great, but the scenes of Connolly defending Bulger’s action to other FBI agents might be even better. It’s pretty cool to see both sides of the coin with this one, and it definitely makes for an entertaining picture.

Black mass is a pretty cool movie. It’s incredibly dark and scary, and Johnny Depp really sells this character, Whitey Bulger, as a man you would not want to cross. Depp is right at home, playing the character, not as a man of personality and charm, but as a man you are terrified of. The actor is no stranger to this genre, and infact, it is probably the genre he does best. From Donnie Brasco to Blow, Depp generally tends to knock these roles out of the park. Of course there are exceptions (like Public Enemies,) when he takes a shot at the genre and doesn’t pull it off, but for the most part, Depp knows what he’s doing here, and Black Mass, just might be the best example that proves it.

This time around he’s working with director Scott Cooper, a man who has been working towards doing something great like this for a little while now. Cooper has made movies that were little bumps on the map, but certainly nothing  memorable. His films include Crazy Heart (the Jeff Bridges guitar-playing, best actor oscar winner, that was slow as hell,) and Out of The Furnace, which somehow managed to take a story with real promise and potential, and strip it down to another dull and boring film. With Black Mass, for the first time, Cooper actually gets it right. This movie is anything but slow, and is incredibly interersting every step of the way.

Maybe that’s because both of the leads are fascinating characters. In the case of Bulger, he is a force to be reckoned with. This man kills people left and right, and you never know who is safe. I really haven’t felt this uncertain of the safety of characters since Goodfellas, with guys like Morey, the salesman, getting shanked in the back of the head, while in the front seat of the car. It’s the same kind of tone and atmosphere here. And while this movie might not capture the lifestyle and glamor as well as something like Goodfellas did, it certainly offers up a new angle on the all too familiar story. This film isn’t just about the mob and a fish out of water coming into the mob. It’s about an alliance between the mob and the FBI.

That might be a little crazy to comprehend and that’s because it really is. It’s crazy to all of the people involved. Pretty much everyone except for the two main guys themselves. There’s Bulger, and then there’s the FBI agent, John Connolly, (Joel Edgerton,) and they are the only two guys who are actually defending this thing. In Connolly’s case, that’s especially hard, since everybody else at the FBI thinks it is completely ridiculous to be letting a known murderer go on and continue murdering, just because he is giving them information about other gangs and gangsters. Connolly feels a sense of loyalty and friendship to Bulger, going all the way back to when they were kids, and Bulger had his back on the street, when Connolly was getting beaten up one day.

The movie knows how to set the tone from the very beginning, and pretty much hits every note right. The opening shows us a character named Kevin Weeks, (Jesse Plemmons, so great on both Breaking Bad and Fargo,) being interviewed by the police. He’s a man who worked with Bulger, and is now turning informant. We see the first portion of the story through his eyes. That means we start off with him being new to the job, working as a bouncer outside of a bar. When three men come up to the door, Weeks refuses their entrance, claiming that last weekend one of them took a piss on the side of the bar. This leads to some head-butting, and a fantastic moment where Weeks gets hit and then smiles, because he knows these guys have given him a reason to start fighting. They’ve given him an excuse.

From here we move inside the bar and meet Bulger, as he is giving one of his friends a hard time for dipping his fingers back and forth into both the communal snack plate, and then into his mouth. Right off the bat, we can tell that Depp has got the Boston accent down, and he’s also clearly the kind of guy who makes everyone else around him uncomfortable. Sticking with the story of Weeks, Bulger goes outside to break up the fight, and then the next day, picks Weeks up in his car. Apparently the man who Weeks was fighting was married to Bulger’s cousin, and so Weeks thinks this is a drive out to his death. Especially when the drive leads them to an abandoned parking area. That’s when Bulger starts beating on somebody else in the car and looks to Weeks to join in with the attack.

We alternate, in the first half of the movie, between Bulger the mobster, and Bulger the family man. He’s got a wife and son, and he tries to be a good father, the best that he knows how, only Bulger doesn’t quite pull it off. When his son is caught hitting another boy in the face at school, Bulger sits the boy down. He then gives his son a lesson on why the boy got in trouble, stressing that it’s not because he hit the other kid. It’s because he hit the other kid in front of witnesses. It’s one hell of a piece of advice. We also say Bulger playing cards with his elderly mom, accusing her of cheating, in a joking around way. The only argument that can be made against this movie is that maybe it’s a little long and that some scenes could have been cut. I suppose the scenes with Bulger’s mom might be some of those.

It’s not long after all of this, and after another member of Bulger’s gang is killed, after he insults Bulger at a bar one night, that we get into the FBI story. Joel Edgerton is fantastic here, as Connolly. He’s a man that you almost feel bad for, because it’s like he just wants to be accepted by the cool kid in school. Bulger is that cool kid. Connolly is not only willing to risk his job for this man, but also his whole moral code of ethics. He knows that Bulger is killing, but he doesn’t care. Instead, his goal is to convince the higher ups at the FBI that Bulger is worth a lot to them as an informant and that they should leave him on the street. Connolly has a number of scenes where he butts heads with the head of the agency, Charles McGuire, played by Kevin Bacon. There’s also Robert Fitzpatrick, played by Adam Scott, as the sort of go between, who is the neautral party in the middle of Connolly and McGuire. When Connolly needs to convince someone at the Bureau of something, it’s Fitzpatrick first, and a much easier challenge. McGuire is the one who really gives him a hard time.

One such example of this comes when a man named Brian Halloran (Peter Sarsgaard,) from Miami comes in, wanting to talk about Bulger. He’s got information that Bulger planned to have the man who is the head of the High Line gaming commission killed, payed Halloran off to ignore what he heard, and then killed that man. When Halloran comes in, Connolly gives him such a hard time about other crimes, such as dealing drugs, doing drugs, and killing his dealers, that Halloran ends up leaving the station. Not long after that, Halloran is murdered by Bulger in cold blood. We are to assume that Connolly tipped Bulger off about this man coming in to talk.

There’s a lot happening in this movie, including a subplot about Bulger’s son getting ill, and it leading to the demise of the relationship between he and his wife. There is so much, in fact, that not all of it can be spelled out. For example, this one argument in the hospital, between Bulger and his wife, is the last time that we see her character. It can be assumed that the two of them split up. Especially after we learn the fate of his son. The things that are cut or omitted, seem to be cut for a good reason. We know why Bulger and his wife probably split. We know that Connolly tipped Bulger off about Halloran. And for the first time, director Cooper seems to be getting the hint. A faster pace leads to a more compelling story, and if it means cutting some things that weren’t necessary to begin with, then all the better. In place of these scenes, we get more intimate and haunting moments, like a dinner scene where Bulger turns a humorour conversation into a threatening one when a man gives a way the secret of his family recipe. If this scene isn’t right out of Goodfellas, with the “how am I funny,” Joe Pesci scene, then I don’t know what is. Still, it doesn’t feel like copying as much as it feels like taking something that works and building from it.  That’s pretty much the story of this movie. Sure, there have been other, greater gangster movies that have come before it, including the Departed and Casino, (some other Scorcese gems,) but this movie definitely captures the right tone, story, and characterization, and knocks all three of them out of the park.