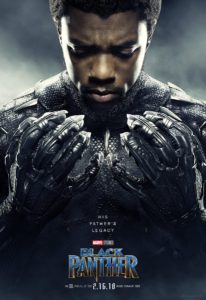 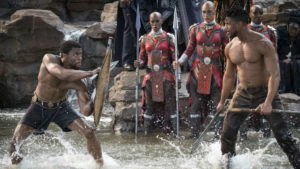 A pretty cool action movie with some interesting villains, and pretty wild technology.

Black Panther is the rare superhero movie that actually has moral questions and implications behind its ideas. This one, like Captain America: Civil War, has some real debatable issues to consider, and they cause the character much distress, in trying to make sense of what has come before, and what direction to go in for the future. There’s the question of the country, Wakanda, and how they stay hidden from the rest of the world when maybe they shouldn’t. Then there’s the question of the villain, Eric Killmonger, and his approach to Wakanda and where he believes he belongs. On top of that, there’s Tachalla, (Chadwicke Boseman,) playing the protagonist and being forced to question the way his father did things before him. All of this, plus some really cool technology and weaponry, and a good deal of exciting action, make Black Panther a smart and fun movie.

Marvel has done it again. Another fun, lively, creative movie. This is the story of a fictional country, Wakanda, with amazing technology and some very interesting stances on their view of the rest of the world. Unlike some of their other movies about fictional locations, that are sci-fi / fantasy based, (Thor, Guardians of the Galaxy,) however, this one in many ways feels real. It is most certainly grounded in reality. Sure the technology is above anything we have going on today, (that we know about,) but this one is set on earth, in a part of Africa, and deals not only with action and vengeance storylines, but also with some political ones.

The story goes into some pretty deep and unexpected places. There are real questions raised here, both surrounding the villain and also surrounding the way this country has done things up until this point, keeping itself hidden from the rest of the world. You see, Wakanda is fueled by vibranium. It’s a priceless and indestructible metal that nobody knows is there. The rest of the world thinks Wakanda is a poor country of farmers in Africa. It’s not. It’s actually a technological city that can match some of the most advanced cities in the entire world. Only it hides this in secrecy, because the country believes if the rest of the world found out what they had there, it would lead to violence and bloodshed. This stance is called into question throughout the film.

We see early on in the movie, exactly how Wakanda, and all that it is, is able to stay hidden from the world. There is a cloaking device that the advanced city is hidden under. It’s almost like an illusion that is clouded over anyone who looks at Wakanda from afar. All you can see are forests full of tremendous trees. But diving through those trees, (as the aircraft that is carrying Tachala does, towards the start of the film, ) this amazing world is suddenly thrust upon you. The storyline has him return home from some time away, to give us an almost fish out of water sense of what it’s like to come into this place. (Think of it like Bruce Wayne returning home after training in Batman Begins, or Iron Man returning home after being imprisoned in the Middle East, in his first film.) Only here, it is even more of s fish out of water story, since Wakanda has built up in his absence, and characters there have new things to show him.

King Tachaka (Tachala’s father,) is dead. We saw him die in Captain America: Civil War. This movie takes place shorty after that, with Tachalla coming back to Wakanda to replace his father, and take up the mantle as king. Before we get to that, however, we get the story of the history of Wakanda, as told by the priest of Wakanda, (Zuri, played by Forest Whitaker’s) The story tells us about how a meteorite of vibranium hit the country and gave them the greatest resource they could ever hope for. It tells us of the five tribes of Wakanda, and how four of them united under a king, but one of them refused to accept this leader, and instead retreated up to the mountains.

We meet each of these different tribes as Tachalla is touring around his kingdom. We also meet his sister, Shuri, who is the genius tech scientist in charge of that department. She’s like Q from the James Bond films, loaded up with gadgets and projects. It’s nice to see the younger sister character in a role that doesn’t fit any of the usual cliches. She’s not bratty, immature, or annoying. She’s not jealous or in any way inferior to her brother. Instead, Shuri is super smart and in charge of her area of expertise. And the weaponry and inventions she comes up with are all pretty cool. She has a technique, for example, where one can pilot a car or helicopter from a remote location, but not actually being anywhere near the vehicle. This is the Bond movie of the Marvel universe, complete with inventions, a scientist / quartermaster, and a casino action scene. All of it works.

When Tachalla arrives home, he partakes in the countries ceremony to anoint him king. The tradition is that Tachalla will fight any member of the five tribes who wishes to challenge him, and someone will speak for each tribe. If a warrior from a tribe wishes to fight him for the mantle, than Tachalla must grant the warrior a fair challenge. Only he’s got an advantage. Tachalla has the strength and power of the black panther inside of him, due to a special plant, known as the heart-shaped herb, which is cultivat d there. So if he ends up getting challenged for a fight, Tachalla must drink something first, which takes that power away.

This is exactly what happens. Tachalla accepts a fight from a member of the mountain tribe, and the two warriors go at it against each other, over a waterfall. Tachalla wins, as we knew he would, but a whole lot is established here. There’s the king challenging ceremony tradition, (which will be important for later,) the tribe in the mountains situation, (again, something to keep track of, as their importance is yet to play out,) and the way that the flower of Wakanda works, and grants certain powers. Once he is annointed King, Tachalla next takes on the tradition of ingesting the nectar from the flower, and allowing it to put him in a hallucinatory state. This is where he goes into the afterlife to reconnect with his father.

While all of this is happening in Wakanda, there is trouble brewing overseas. Ulysees Klaw, a known terrorist in Wakanda has stolen a large amount of vibranium and is planning to sell it to buyers at a casino in South Korea. Tachalla goes there to stop him with the Okay, captain of his security, the Dora Milage, (Danai Gurira, better known as Mishone from the Walking Dead) there as a sort of bodyguard. He also brings a date, the girl he has feeling for, Nakia, (Lupita Nyongo.) All hell breaks loose on the casino floor, and an attack turns into a car chase through the streets of the city, that leaves Klaw (Andy Serkis, reprising his role from The Avengers: Age of Ultron,) as a prisoner of Wakanda. All of this also brings Martin Freeman’s CIA agent, Everett Ross, (formerly a SHIELD agent, from Captain America: Civil War,) into the fold. He has interests in stopping Klaw too, and stays around to try and get to the bottom of all that is going on.

This brings us to our big villain, Eric Kilmonger, (played by Michael B Jordan.) Here’s a guy who has some real logic and reasoning to his actions, the kind that audiences can either get behind, or at least sympathize with. And he’s working with Klaw. Only some unexpected situations occur, and pretty soon, Kilmonger is actually challenging Tachalla for reign over the entire kingdom. The twists involving this character are terrific. They start with Klaw, and they branch out from there, as we follow Killmonger (a nickname given to him for how many kills he got while in the army,) on his journey. Jordan plays this villain in a very interesting way. He has bad intentions, but he’s not evil. And he’s certainly very smart and calculated in his plans.

While the storyline surrounding the villain is very creative and unique, it does turn into something kind of routine somewhere in the second half where Kilmonger challenges Tachalla to a fight over the waterfall. At that point, you can predict who is going to win the fight and what it will mean for the rest of the movie. Still, there’s so much to like about this movie that it’s eventually falling into one story cliche isn’t such a big deal. We still get some very cool action, including fights between different tribes of Wakanda, and all kinds of cool uses of Shuri’s technology. Black Panther is a movie that works on multiple levels. It’s got great action, the story of a country turning in on itself, the story of the country reassessing how they deal with the rest of the world, and than the personal tale of a man trying to find his birthright and allowing it to take him down a very dark and destructive path. All that, not to mention the story of Tachalla, realizing that his father wasn’t the saint he always thought, and that he might need to take the country in a new direction, that goes against the way things have always been. This movie packs it all in, and really delivers a thought-provoking action film.