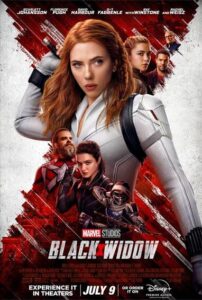 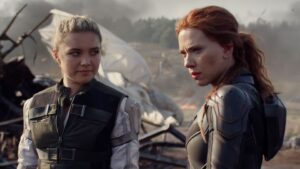 A solid entry in the MCU cannon, this one tells the story of what Natasha went through by having her go back to where she was trained to right the wrongs of her past.

It’s an okay Marvel movie, and for two thirds of the way, it’s actually quite good. But things go off the rails pretty badly in the final act. The movie has tons of action. Especially in the first half. And it’s got a plot that does address the Red Room, which is something we’ve heard about throughout these Marvel movies. But what it doesn’t do is show or explain a whole lot about the Budapest situation, or connect nearly as much as it should to the other movies. As a stand alone film, however, this one is good, but far from great.

Black Widow is a fine movie. Say what you want about how it was made too late, after the character already died in a later movie, or about how this movie is clearly a launching pad for the Florence Pugh – Yeleta Bolova character, but none of that really takes away from this being an enjoyable experience. Now, is it great? No. No it’s not. These days solo hero movies generally aren’t (other than Black Panther.) But for two thirds, this is a pretty solid film, and it’s only in the last third that the movie doesn’t quite measure up.

Regarding the idea that Marvel should have made this movie a long time ago…there’s definitely some truth to that. After all, this movie is set in between the events of movies Captain America: Civil War and Avengers Infinity War. So why wasn’t it filmed and released in between those movies? Maybe it was a mistake, or maybe Marvel knew what it was doing all along. That’s kind of doubtful though, considering the character is now dead (she died in Avengers Endgame,) and so by default we know she can’t die in this movie. Either way, the continuity of it all works to help connect the pieces and bridge those two other movies (Civil War and Infinity War,) together nicely.

The opening is a flashback to when Natasha and Bolova (her younger sister,) are just kids, living in Ohio with a mother and father. As it happens, this family unit is completely fake, and it’s an undercover Russian agents on US soil operation, much like the show The Americans. The father figure here (Alexei, played by David Harbour,) comes in and sits down at the table with his wife and two daughters. He explains that they need to go on the run, and the family packs into a car and drives off. This leads to a car chase and airplane runway shootout that makes for a lively action opening. Alexei ends up hanging onto the wing of an airplane as it takes off, Mission Impossible-style. He literally hangs on with one hand while firing at oncoming cars with another. This is great stuff, and it makes for a solid opening.

From there, we cut to Natasha, present day, with General Ross (William Hurt,) coming after her. He mentions to his men that she attacked the King of Wakanda (a throwback to Captain America: Civil War,) and then sends them in to arrest her. Only Natasha is long gone by the time they get there. The scene really just helps establish when this all takes place… right after the events of Civil War. But then we cut to another part of the world (Morocco,) and a scene that will really kick start the current story. It is Bolova who is after a target. When she catches up with her prey, the woman she’s after opens a case full of vials and cracks one of them, spraying Bolova all over the face. Red dots appear on Bolova’s face along with red misty smoke. And suddenly Bolova can think straight. She realizes she just killed her friend.   And the woman who was doing the assassination job with her now radios in that Bolova has been compromised. Before dying, however, the woman Bolova was targeting passes over the case of vials filled with the antidote to “mind control,” over to her.

Natasha, meanwhile, goes to Norway where she meets with a contact who brings her a few things from her past. One of these things is a box full of items that Natasha left in Budapest. Ir is this box that Bolova has placed the vials. We learn this when Natasha is attacked by the Taskmaster, a cyborg-like assassin with a skeletal mask, on a bridge one night. The fight scene between these characters is great, with the use of all kinds of weapons, and with the Taskmaster literally mimicking Natasha’s moves at the same time that she is doing them. And it’s during this action that Natasha realizes the Taskmaster isn’t after her. He’s after the vials. Natasha might not know what they are, but she knows they’re important, and so she grabs them and books it out of there, jumping off the side of the bridge.

At this point, what’s really happening is we are following the vials. And that’s a pretty cool situation… especially when you realize that we didn’t know we were following them. We didn’t know how this story of Bolova connected to the Taskmaster coming after Natasha. But now it all makes sense. And Natasha decides she needs to get to Budapest herself, find Bolova, and get some answers about what exactly these things are. So she goes there, to her old apartment building, and we get a great hand-to-hand combat action scene between she and Bolova. This is reminiscent of the kind of action in the Jason Bourne movies. And it becomes even more so when the next thing you know these two are taking to the streets on a motorcycle for a chase. That when turns into a car chase, when they abandon their bike for a car. And just like that we have a ton of action all at once. This sequence ends the first act of the film.

The second act is about the family. Specifically it is about finding one member after another who might have a clue as to where The Red Room is located. The Red Room is the place where the Black Widow was “made.” It’s the training facility where she learned to become an assassin. And it’s a place that takes young girls away from their families and homes and brainwashes them to work for this one man, Dreykov (Ray Winstone.) What Natasha doesn’t know, and quickly learns from Bolova is that Dreykov is still alive (Natasha thought she killed him,) and also that he is now using literal mind control on the Widows so that they cannot think for themselves. In order to find the Red Room, the first person these two decide to go after is Alexi.

To do this, it means breaking him out of prison. And so we get another elaborate action scene, this one involving a helicopter and Natasha hanging from a rope underneath it while an avalanche barrels in. This turns out to be another cool action scene with Alexi getting to demonstrate some of his super soldier abilities (he is the Russian Captain America, and used to have a superhero name and costume of his own.) By it’s end, the two girls have reunited with their former “father,” only to find out that he has no idea where the Red Room is. What he does know is where Melinda (Rachel Weisz,) their former “mother,” is, and he believes she will have the knowledge of the Red Rooms whereabouts.

He’s right. The family goes to see the unofficial mother, and they sit down at the table to drink and have a number of discussions about their past life together. It was three years where Bolova was the only one who didn’t know it was all fake. She wasn’t in on it. And so when Alexi and Melinda disappeared, it all felt very real and devastating to her. Bolova gets into it here. She gets emotional in some of the most interesting scenes of the movie. And then Dreykov’s men find them and the group is brought to the Red Room for the final act.

Now, there are questions to be asked here, to be sure. Like would Dreykov really bring them to the Red Room, or would he just have them killed then and there? But for the purposes of having a fun movie, it’s cool that we get to see the Red Room and it’s hidden location for the final act of the film. And the climactic scenes that all take place on this “base,” do not disappoint. The movie might have a fairly simple structure of one single mission… to find the secret hidden base… and a mid-section of going from one character to the next who might have answers, but it still works. It definitely gets an advantage by being able to reference other Marvel characters as often as possible, from Stark to Captain America to the “incredible shrinking convict,” (Ant Man.) The ending does tie into Infinity War, but one has to be a little disappointed that we didn’t get more about Budapest or even see Jeremy Renner here (at one point, we are with Natasha in a flashback to when she was working with Renner, and even hear his voice over the intercom. Maybe he wasn’t available to cameo and this was the best they could get. The movie definitely has flaws (the mind control assassins is a little played out by now,) but it has an engaging story and definitely delivers on the action, if nothing more.