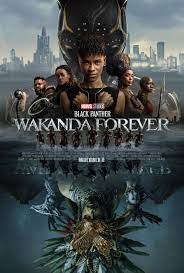 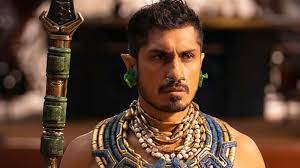 A pretty decent Marvel movie, about two nations at war with each other.

Black Panther: Wakanda Forever is the sequel to what was one of the most popular Marvel movies of all time, Black Panther. The sequel should be a no brainer, sure-fire smash hit. Except for one problem… the star of the movie series passed away. In what was an incredibly tragic and unexpected situation, we all learned a few years ago, that Chadwick Boseman had died. It was especially bizarre because nobody even knew he was sick (not even Marvel.) So there was no backup plan for this. And Marvel insisted they were not going to just recast him and put another actor in the role (a very good decision to not do that.) But writer / director Ryan Coogler found a way to tell a new story without the franchise’s star. And he did so by embracing Boseman and his memory.

At the start of this sequel, we open on a black screen and the sound of a heart beat and heart monitors. We fade in to see King Tachalla’s sister, Shuri, in her lab, working tirelessly on a DNA solution that can save her brother. Her A. I. voice operating system, (like Jarvis from Iron Man,) tells her of the heart rate of King Tachalla, which she is monitoring as he remains off screen, dying, in another room. The A.I. tells Shuri she should go be with her brother now. Only she doesn’t. She doesn’t give up on him and keeps trying, and a moment later,  her mother the Queen (Angela Bassett,) walks in and tells Shuri that Tachalla is with his ancestors now.

In this way, the movie gets at the elephant in the room and goes at it head on from the very beginning. It takes the terrible challenge off the table immediately. This is certainly a smart way to do it, because the longer you wait, the more it feels awkward that they’re not showing Boseman (if they are telling us that his character were still alive somewhere.) But they handle the situation very tastefully here, never even showing him in a hospital bed. And the sequence ends with a cut to the Marvel logo and credits, which are completely composed of images of Boseman – a really nice tribute, almost like a shrine to the actor.

From here, we get into the story.  There is an American ship stationed out at sea at night, in the middle of the Pacific Ocean. The ship deploys two scuba divers to go underwater. And we travel down with them, as they are mysteriously attacked by some unseen presence. Back up on the surface, on board the ship, the attack continues. We see a number of blue skinned people standing in the water, humming a siren-like tune. And it causes the American sailors on the ship to walk to the edges of the ship and jump over, to their deaths.

How Marvel comes up with this kind of thing, and finds a way to pull it off, is impressive. Let’s have a bunch of blue skinned people and find a way to not have them look silly (sorry Avatar.) Let’s have a siren song that hypnotizes people, only make it more of a creepy tune than an actual song with lyrics. And let’s kill a whole ton of people, but do it in a way that is more spooky than brutal. There’s always an angle or a trick here, and for the most part these angles are all handled really well.

Following this sequence, we are with Shuri and the Queen, sitting by the water of a lake, talking about Tachalla. That’s when they get an unexpected visit from a mysterious creature with wings on his feet. This is Namor (Sun Mariner in the comics, but never referred to by that name in this movie.) He tells Shuri and her mother of his people, the Talocan, and their city under the sea, in the ocean water. He also tells them of a scientist in America who has invented a machine that can detect vibranium. And he tells them that the Wakandans are not the only ones who have vibranium, but that the Talocans have a significant amount of it under the ocean, as well.

Shuri now goes to meet with Agent Ross (Martin Freeman,) from the previous Black Panther movie, as well as Civil War. Ross tells her the identity of the scientist, and Shuri and Okoye go to the MIT campus to find this student, Riri Williams, and talk to her. As it happens, they get theee just in time, because the CIA shows up almost immediately after, outside of the garage where Riri houses her projects. This leads to a pretty cool car chase. Mark it down as the first action sequence of the movie. It is followed by an attack on a bridge by the blue-skinned Talocans, who fight with Okoye, and win.

There are three big action sequences in this movie, and the car chase turned bridge fight is the first of them. It ends with Shuri going down to Talocan to see that city for herself. Only the Wakandans think she has been kidnapped. And so the Queen finds Nakia, and asks her gie hrlp, sending her down to rescue Shuri. The Talocans view Nakia’s attack and  Shuri’s rescue as a sign of war. This leads to the second major action scene, Talocan’s attack on Wakanda. It’s big. It involves the people of the sea flooding Wakanda. And it also leads to an unexpected character death, which the movie definitely had guts to pull off, considering they already lost Tachalla (Boseman.)

The final action scene is the big battle between the warring nations. Only it doesn’t take place on a battle field. It takes place on the deck of a giant ship. The setting makes for something a little different. And they throw quite a lot at this scene, including multiple character in mega-tech Iron Man-like suits, flying around. On top of that, while this massive fight is taking place on the ship, there’s a one-on-one hand to hand combat scene happening in the dessert. That’s meant to put things more into perspective, and make them a little more personal.

On an action level, this movie works. There are three major action scenes, but each of them could actually be viewed as two… (for example, the attack on Wakanda, middle action sequence, really starts with Nakias attack one Talacon.) As far as story goes, the movie is okay. Nothing unique, like what the first movie created with Killmonger (the way he used Andy Serkis’ Klawe in that movie was pretty devious,) but still kind of cool. And that Marvel touch of peppering in characters and Easter Eggs to other movies is in full form here, starting with Agent Ross. The movie isn’t amazing, but it does work. And it’s something different ( every major Wakandan character is a woman, other then Umbaku, who is given very limited screen time.) Overall, it’s an enjoyable follow-up film, to the sensation that was the original movie.