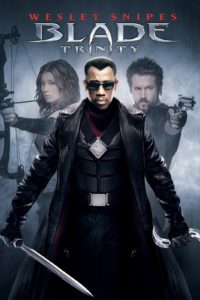 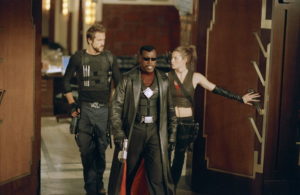 A ridiculous waste of talent, from the writer / director on down, this movie packs a bigger cast than any other Blade film, and it is also by far the worst of the series.

A lousy movie by every sense of the word. This one tries to use Dracula to give us the same basic storyline of the first film. Dracula was a day walker, so if the vampires bring him back to life, they can use his blood to become Day walkers themselves. The first movie tried this same idea, only instead of digging up Dracula, they just used Blade’s blood. In this film, the vampires have the police taken over, and together they kidnap Blade until two characters show up out of nowhere to save him. Suddenly he’s part of a new team. And those two characters plus Blade map out the reason why this movie is called Trinity. The action isn’t special and the sequences throughout the film are not memorable. The cast is good, (although not especially good in these roles,) but otherwise, this is a pretty bad film.

Blade Trinity is by far and away the weakest of the three movies. There’s a reason why this was the last Wesley Snipes Blade film they made, and it’s not because they just wanted to make a trilogy and end there. It’s because of how bad this movie turned out. By the time this movie was in production, Snipes was such a fallen star that they had to get Jessica Biel and Ryan Reynolds in there, as costars, to help bring in the younger audience. And let’s just say, Snipes was none too happy about that. The result is a mess. This movie is called Trinity, but that title or idea is never mentioned. We are to assume that the double meaning is simply that there are three lead characters, and that this is the third movie. That’s about as deep as this movie ever gets.

It’s a real shame because the series was coming off its strongest entry with Blade 2. As directed by Guillermo Del Torro, (before people actually knew who he was or what he was capable of,) that movie captured the grotesque in an anatomically feasible and believable way. It also captured action scenes, thrills, and plot twists, in a way that took the series to another level. Let’s not kid ourselves, these have always been B movies, but that second one was the best of the bunch. The third is just a scrambling of loose and chaotic ideas. They don’t stick together, and the director seems to forget the importance of having memorable action scenes or locations. There’s almost nothing memorable about this entire movie.

The first of these ideas that are thrown together, is to bring in Dracula. That’s right. The fictional character that was written up into a novel by Bram Stoker and that the silent film Nosferatu first put on screen, is a major part of this movie. The way they do it is by telling us that Dracula was the original and first vampire, and that he was a day walker, just like Blade. If they can get his DNA, then they can tap into something that will make vampires just as powerful as Blade is. But here’s the thing… you don’t need Dracula (and digging him up in Iraq.) You’ve got Blade. Just catch him and harness his blood. Oh wait. The first movie was all about that. In other words, the Dracula plot line is basically a recycling of the story from the first movie. Only there, it made a hell of a lot more sense. Taking the blood of the guy who is right there, in front of you, is a thousand times easier and more logical than digging up Dracula.

The movie opens with the Dracula resurrection situation. The characters are in a desert in Iraq, and let’s just say there’s only so many times you can see the same basic scene, from The Mummy movies, (including the Tom Cruise one,) to X-Men Apocalypse. The one thing these movies all have in common is that they are all pretty bad. After Dracula’s resurrection, we move to Blade on the attack, busting in on a bunch of vampires and killing them. It’s just like the opening of the second film, only not half as good.  The only thing worthwhile is how the sequence ends. Blade is caught on camera killing a human who was posing as a vampire. It’s all a stunt to get the media and police against him.

And that’s exactly what happens. The chief of police and a psychiatrist (John Michael Higgins,) appear on a talk show, sitting at a round table, doing an interview about Blade. They talk about how he’s a psychopath who believes some people are vampires and is really just a serial killer maniac. Whistler (Blades mentor / old man weapons maker,) watches the interview and makes the argument that this is a sign of where we are today. Everything, even vampire hunting, has become political (the movie was made in 2004, more than ten years later, Whistler has no idea how right he would be, with people recording everything on their phones today.)

Before long there’s a police  raid on blades headquarters. This leads to the police having blade in custody. Guess what? The police are working with the vampires. So is that psychiatrist from earlier. If this is the current state of the world, where everyone is either a vampire or working with the vampires, than what’s the point of saving anyone? So now the vampires have Blade trapped and weakened, and are about to kill him when two new characters show up and start kicking butt. These are Abigail Whistler(Biel,)  and Hannibal King (Reynolds.) Nothing like characters who show up out of nowhere at the most opportune possible time, when all the villains had to do was pull the trigger and kill our hero.

Whistler and King bring Blade back to their hideout, where they confide in him that they are part of a bigger team, called the Night Stalkers. Now we meet the other members, who are all stay at home scientists. These include Natasha Lyonne and Patton Oswald. They are likable actors who are given forgettable roles here. In the second movie, Blade teamed up with a team of warriors, known as the Reapers, but the thing there was, they all could fight. They were a team because they worked together, (and then betrayed each other.) In Blade Trinity, it’s really just Whistler and King doing the action and the others staying behind to make weapons for them.

As the story goes on, the vampires break into this hideout and attack the team. They kidnap Hannibal King. So Blade is the vampire’s prisoner in the first half and King is their prisoner in the second half. And once again, they don’t kill him. Instead, it’s like they’re just sitting around waiting for him to get rescued. We learn about his back story and how Parker Posey’s character, the head of the vampire team, used to date him and then made him into a vampire. And only the scientist on his team, (the Natasha Lyonne character, ) was able to bring him back. None of it is very interesting.

And at the end of the day, that’a really all you’ve got. A vampire hunting movie that was made when the franchise clearly had nothing new or worthwhile to bring to the table. If all you’ve got is Dracula, and all you can use him for is to do another take on the storyline from the first movie, than there’s a problem. This is the first real movie made by writer / director David S. Goyer. This guy has always been a screenwriter and a master of writing superhero pictures. He is the mind behind the writing of all of those Christopher Nolan Batman movies. But as a director, he’s pretty lousy.

The one thing that Goyer does take away from the previous film, that works for him, is the way the vampires explode when they die. In the first movie, they turned into red, painted skeletons and it looked absolutely ridiculous. Then Del Torro had this sparking and exploding idea, with the second film, and it looked great. Goyer basically does a take on that. But when the best thing you can say about a movie is that it does something good that the previous movie already did, you know you’re in trouble. With the star studded cast here, from Parker Posey on down, this movie should have been a whole lot better. Even Ryan Reynolds blew up as a superhero, with Deadpool, once he got the right role. But before that, he made a whole bunch of superhero movie stinkers, from this film to Green Lantern to X-Men Origins, Wolverine. Blade Trinity is a movie that somehow is watchable, (probably because of its likable cast,) but it sure doesn’t have much  to offer.