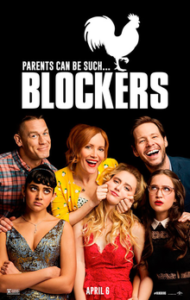 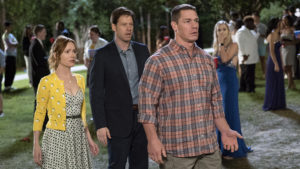 This movie wants to be the adult version of American Pie, but the humor and stupidity of the plot just don’t work at all.

Blockers is an absolutely idiotic movie. This one wants to be like Neighbors, meaning that it goes back and forth between the story of the kids and the story of the adults, and is all about the adults trying to stop the kids. But what the adults are trying to stop the kids from doing is incredibly stupid. It’s having sex. This movie rips off the plot of American Pie, (three kids make a pact to lose their virginity on prom night,) and then says, what if we have the parents of these kids spend the movie trying to stop their kids from losing their virginity? The reason why it’s so stupid is because the kids are old enough to make their own decisions about that. Just think about how American Pie basically celebrated it, and in this movie the parents are condemning it. Imagine if American Pie had been about the adults trying to stop their kids, or had spent as much time with the adults as it did with the kids. The movie would have been a disaster. Well, that’s exactly what we get with Blockers. Once in a while there’s something that’s worth a quick and small laugh, but that’s about it. For the most part, the jokes aren’t funny and the story is pretty terrible

Blockers is a dumb and dopey movie. There’s no getting around that fact. This is a movie that puts together the side players of recent Judd Apatow films (like Neighbors, Trainwreck, and Knocked Up,) and tries to pass them off as A list stars who are big enough to carry their own movie. They’re not. Not with this script and storyline, anyway. It’s like when the American Pie movies started making direct to video spinoffs that featured only one character from the original films. Jim’s dad. Blockers also features the remnants and B players of those other, better movies. And it has more than a few similarities to American Pie.

The movie stars Leslie Mann (Apatow’s real life wife, and one of the actresses in The Forty Year Old Virgin, Knocked Up, and This is 40,) as well as Ike Barinholtz (The Neighbors movies,) and John Cena (Trainwreck.) That’s right, even wrestling sensation John Cena is a movie star now, following in the footsteps of The Rock. Now, that might not be an A list, high caliber cast, but all actors get their big break from somewhere, and if this movie had been better, maybe it could have actually done it for some of these stars. After  all, when Seth Rogen got his first starring role in Knocked Up, he was coming off being a side player in movies like The Forty Year Old Virgin and You, Me, and Dupree. But this movie is no Knocked Up. It isn’t anything close to original or creative, and the ideas that are indeed different are just incredibly dumb, to the point where they make you realize there’s a reason why nobody ever made a movie with this storyline before. Because it’s pretty terrible.

The story here is that all three of these actors are playing parents, and their kids are three girls who have been best friends forever and now decide to make a pact. On prom night, they are all going to lose their virginity.  Sounds familiar right? Like really familiar. That’s because it is the exact same storyline of the first American Pie, the movie that relaunched the raunchy teen comedy genre. Only there’s one exception. This time the parents of the kids are trying to stop them. What???  Imagine if the story of American Pie was about the parents trying to stop their kids from having sex. And if the parents were on screen as much as the kids were, if not more. Talk about a ridiculous idea.

There are all sorts of reasons why this plot line is terrible. First of all, if these teenagers really are graduating seniors in high school, then they’re at the point of being able to make their own decisions. They don’t need to consult their parents about having sex, and they certainly don’t need their parents trying to stop them. Secondly, in the wake of the “Me Too” movement, and how far we’ve come with equality for women, this movie clearly features a double standard. If it was guys trying to lose their virginity, the parents would be celebrating and egging them on, (just like Jim’s dad in American Pie, with the whole tennis, do you want a partner scene.) But since it’s girls, the parents feel that they need to protect their daughters. Finally, this is a bad concept because it means the parents are the stars of the show, and not the kids, (like they were in American Pie.) Who wants to see that? American Pie worked because it tapped into teenage pranks and nostalgia. And made you feel like you were a kid again. This movie doesn’t even try to do anything like that.

These flaws are so glaring and obvious, that  you have to imagine the studio was aware of them. And so it must be that all of this was intentional. Meaning it was all part of the plan, and even the pitch for this movie. Let’s take the American Pie concept, and this time have the parents trying to stop their kids from fulfilling that prom night pact. And instead of the kids being the stars, this time it will be the parents. You can imagine the studio executives who signed off on this thing thinking it would be throwing a new twist into the genre. If that’s true, (that this was the pitch,) then let’s try looking at the plot from a different point of view…this movie will speak to helicopter parents  and how ridiculous our society has become with being overprotective. And it will star adults who are basically big kids (think about how Neighbors successfully starred both adults and kids.) Finally, it won’t make the case that these parents are right, but instead will showcase the idea of how stupid they are.

Looking at the movie in that way makes it a little bit easier to accept. It’s still not a good film, but at least the plot has a little more merit. And one thing that does make it a little better is the fact that not all three of the parents want the same thing. They are not all on board with this terrible plan to stop the kids. Two of them…Lisa (Leslie Mann,) and Mitchell, (John Cena,) indeed do want to prevent their kids from having sex, but the other one, Hunter (Ike Barinholtz,) actually wants to stop the parents. He doesn’t want Lisa and Mitchell to get in the way of his kid having sex, (it sounds weird, I know,) and so he’s along for the ride only to go against their mission. Thank goodness for that, because as crazy as his character is, he’s still the only voice of reason with this.

And so the three parents go from place to place together trying to track down their kids. And this is where the movie runs out of ideas. The plot was thin to begin with, but at this point, it’s really not running on much. The parents go to a party where Mitchell gets convinced by some teenagers to try butt chugging (it’s even stupider than it sounds.) They make repeated trips to the house of one of the boys who is out with their daughters, to see if the parents will tell them where the girls are. And they have a car accident that sends their car into a vertical position, sitting straight up in the air. If this sounds like amateur stuff, that’s because it is.

There are lots of problems with this movie, and one of them is that it tries to balance the story between the kids and the parents, a little too much. That means we spend almost an equal amount of screen time with three teenage actors who are unknowns. Granted the American Pie cast was composed of a bunch of unknowns when that movie came out, but they weren’t splitting their screen time with name actors. With that movie, what you saw was what you got. And in Neighbors, (and also it’s sequel,) yes, a lot of time was spent with the college kids, but they were talented name actors, (Zach Ephron, Dave Franco, Chris Mintz Plasse, and Chloe Moretz.) In Blockers, spending so much time with the kids doesn’t really make much sense. It’s like the movie doesn’t want to decide what it actually is, a teenage raunchy comedy or a stupid adults slapstick film. And so it goes for both and ends up with no real identity of its own at all.

There is no reason for the movie to put the kids front and center in this one. Especially since the parents are basically big kids themselves. It would be like spending half of Superbad with the cops, played by Seth Rogen and Bill Hader. Sure those cops are funny, and are basically big kids, but if you spend half the movie with them, all of a sudden it becomes a very different film. All of a sudden they’re not so funny anymore. Now there’s nothing wrong with making a movie about adults who want to be kids,  or are trying to hold onto their youth, (look at something like Old School,) but at least with that, it’s about them. Here, the idea of trying to stop their kids is just moronic.

Blockers has a lot of problems to it, including some pretty lousy comedy, (I think I only laughed at one moment here, when they look in the window and see Gary Cole having sex, and Mitchell’s eyes meet Cole’s during the moment when Cole is orgasming. But other than that, this movie really isn’t very funny. And it’s stuck in an identity crisis.  Who is it actually about? Neighbors did it by having the two sides oppose each other in what was basically a prank war. Having the parents just try to stop their kids from having sex isn’t enough justification to feature both sets of characters. You need a stronger and more festive plot than this. The movie doesn’t have one. It’s a mess of a film, with unfunny jokes and a paper thin story. What a waste.